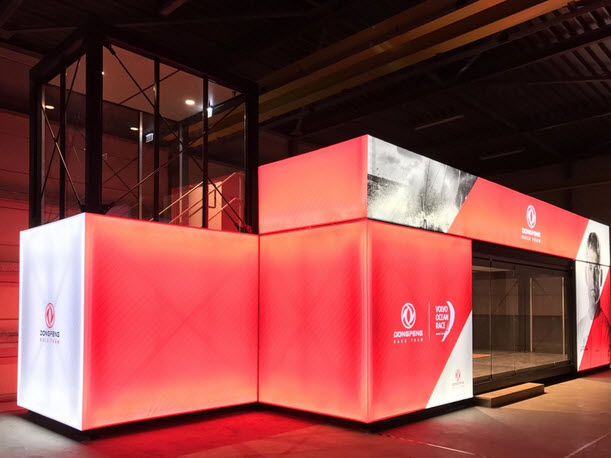 With less than 240 days until the first Volvo Ocean Race 2017-18 village opens in Alicante, the first prototype of the all-new team bases has been completed.

Designed and constructed by Crane Container in the Netherlands, the structures are a turnkey solution for teams and sponsors which will create a unique pit-lane in each stopover around the world, allowing race fans the opportunity to get closer to the action than ever before.

“We’re trying to bring the fans into our living rooms so they can get a feel for what really goes on there – and the new design offers much more of an open interface for the public,” explains Volvo Ocean Race Chief Operations Officer, Richard Mason, himself a four-time Race veteran.

“That face to face contact with the heroes is key. I remember when I was a kid and the Race visited Auckland, my home town. I went to meet Sir Peter Blake who lifted me up onto the helm of his boat, Ceramco. I instantly knew that this was what I wanted to do with my life.”

Aside from giving fans a glimpse behind the scenes of the race which has been dubbed ‘the toughest test of a team in sport’, the modular design makes each base much quicker to build and break than in previous editions, whilst also reducing the amount of space required to ship it around the world by 60%.

“The mobility and efficiency of these structures really is unique,” explains Dennis van Vliet, CEO of Crane Container. “In the past, we’ve modified shipping containers according to client needs and wishes, but this design is totally out of the box and bespoke for the Volvo Ocean Race.

“It’s all stacked together as compact as possible, and its modular design is in some ways similar to Ikea flat-pack furniture or Lego. When we discussed the future of structures in the event during a meeting at Race HQ in Alicante, Spain, the Volvo Ocean Race team had three key requirements – that the structures were high quality, or ‘premium’; that they would be able to withstand being shipped around the planet; and that they were very efficient and sustainable in terms of logistics.”

The process moved quickly from an initial meeting to a first draft, approval, and the beginning of the build process, with Dennis ‘sketching the idea’ based on a stack system whilst waiting to catch a plane from Alicante to his native Netherlands.

Battling time pressures and a constantly changing, unpredictable environment, the Volvo Ocean Race is a logistical challenge like no other. Two identical race villages, leapfrogging each other around the planet, allow the event to visit 12 Host Cities on six continents in just eight months.

“This design is a massive step forward in terms of sustainability,” continues Dennis. “A non-stackable solution would require around 80 containers to be moved around the world – but with this design, we’ve reduced that to 32 slots, which is a saving in terms of both money and environmental footprint.

“The Volvo Ocean Race is a high-pressure logistical environment where every second counts. We’ve been in constant contact with the people who are actually leading the build and break of these structures on the ground, to get their ideas and input.”

Crane Container has already received interest from other major sporting events and third parties in the new team bases, so this story is only just at the beginning.

“It’s a once in a lifetime opportunity to be supplying the Volvo Ocean Race – it tops everything for us. ”

The new team bases will be both built and dismantled by the Race organisation, allowing race teams more time to focus on what really matters – winning the race on the water.