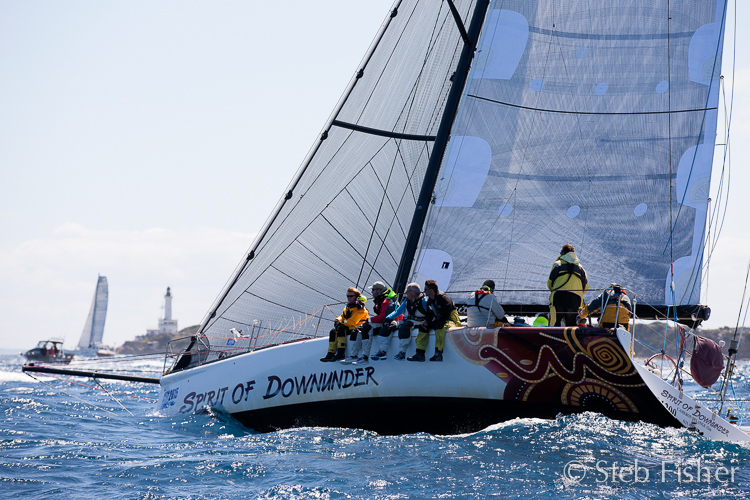 Start of the Melbourne to Tasmania races. Photo Steb Fisher.

All yachts reported their positions overnight and this morning, at the mandatory position reporting schedules.  All yachts and our boys and girls onboard are in great shape and pressing on to Hobart and Devonport.

After their first night at sea, the Southerly winds have decreased to 5 to 10 knots this morning, and expected to remain at similar strength and direction this morning and reaching 15 knots at times this afternoon.  Boats speeds have dropped from 7 to 8 knots yesterday afternoon, down to 3 to 5 knots this morning.  On the one hand, the light conditions can make it very comfortable onboard for the crews.  On the other hand crews will be working exceptionally hard to keep the yachts moving, and maintaining a very watchful eye searching for more wind as little puffs of breeze can make a huge difference.  The tacticians and navigators will be earning their keep today.

The Melbourne Hobart Westcoaster fleet is spread far and wide from West to the East of the rhumb line to Hobart.  With the light Southerly breeze coming from directly where they want to head, progress South is slower than their boat speeds as they tack (zig zag) across Bass Strait.  The leaders are 80 nautical miles South of Port Phillip Heads.  Line Honours favourite EXTASEA (Paul Buchholz) is leading from ONE FOR THE ROAD (Gary Prestedge) and SPIRIT OF DOWNUNDER (Laurie Ford).

The Southerly wind direction is more favourable for the Rudder Cup Melbourne to Devonport fleet as their heading South East to Devonport.  All of the fleet are currently East of the rhumb line to Devonport.  With several similar size yachts, some races within the race have developed, including the battle for Line Honours between the multi-hull PECCADILLO (Charles Meredith), who is currently just in front of TEVAKE II (Angus Fletcher).  TEVAKE II is making ground on PECCADILLO in the lighter conditions.

The battle for 3rd place is also a ding dong battle between HALCYON (Chris Tucker), WHITE NOISE (Daniel Edwards) and BARCARDI (Martin Power).  HALCYON is the only Double-Handed crew in the race with Chris Tucker and Jeremy Walton onboard.