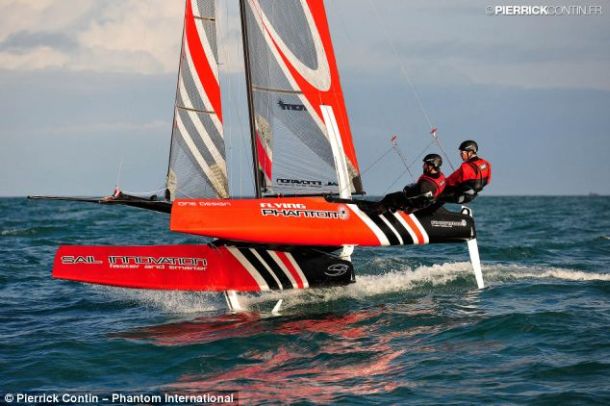 Following the experience of the inaugural event, the Foiling Weektm is pleased to announce an improved programme concentrating all events in one location, held over five consecutive days. It starts Wednesday, July 1st and ends on Sunday, 5

The format provides for the Forums to be held in the morning and the on water activities mainly in the afternoon with a Foiling Expo available throughout the week.

On the water activities during the first three days will alternate between One Design races, an Invitational Kitefoil event and over the weekend, two long distance races:

One Design (OD) races for the Flying Phantom class, the French cat first on the market and therefore one of the most advanced, thanks to the experience gained since the launch in 2012 and the provision of the first boats to some of America's Cup teams. The Flying Phantoms are now perfectly optimized and rigidly One Design. The Foiling Weektm 2015 is the third leg of the Flying Phantom Series 2015 circuit.

The International Moth class confirms its presence following the successful experience in 2014. The event is the Italian leg of the Moth EuroCup circuit where top-level athletes will compete in 7 acts on the best of Europe's sailing venues. The Italian leg expects the presence of non-European sailors from the US and Australia.

The Kitefoil Invitational Contest, in cooperation with the International Kiteboarding Association, will be held in parallel with the One Design races during the first three days of the Foiling Weektm. Sailors will be selected directly by IKA taking the names from the international kitefoil ranking.

The International Kiteboarding Association president, Mirco Babini personally supports the presence of the Kitefoil at the Foiling Weektm 2015. He says: “it will be quite a challenge against all other flying boats who want to demonstrate their top performance.“

On Saturday 4th and Sunday 5th July, a long distance race will take place on a course of approximately 25 – 30 miles around Lake Garda taking in the world class venues of Malcesine – Campione – Torbole. The two races are open to any flying boat, it will be drafted by general ranking without compensation and, where possible, by group and class.

During the week several prototypes and some flying boats already on the market, will take turns on the water, including The Q2a of Quadrofoil and V20 of Vripack. These two boats are hydrofoil boats driven by electric motors, not by sails. In particular, the V20 is an electric / solar solution. It is possible to achieve very interesting speeds with minimum power and great economy of energy thanks to the efficiency of the hydrofoils.

TFW Speed Contest: During the 5 days of Foiling Weektm 2015, the flying boats out on the water, racing or not, will be ‘tracked’ by a GPS system that will measure, record navigation and record the “the best 10 second average speed”. Daily rankings will be drawn up of the best speeds and at the end of the week the fastest will be awarded with the TFW Speed Contest trophy won last year by Simone Vannucci from ASD Kitefoil.

The TFW Forum: Following the success of the inaugural Foiling Weektm TFW Forum confirms a programme of highly advanced topics. The best designers, engineers and manufacturers will present to a selected audience, the strengths, the progress and guidelines for the future of what we like to call “the third mode of sailing”, foiling.

TFW Foiling Expo: In the boat park at Fraglia Vela Malcesine ground space has been made available to showcase boats, kites and products for foiling. Visitors will be able to try the boats and sample the products. During the Foiling Expo, prototypes and production boats, not involved in the regattas, will be visible on shore and on the water. Many crews taking part in long distance races on Saturday and Sunday will be on the water on the previous days to optimise the development of their boats and simultaneously participate in the TFW Speed Contest.

The Fraglia Vela Malcesine is co-organizer of the regattas and the host venue of the TFW Forum and the TFW Foiling Expo. In over 60 years of experience the FVM has established a significant presence in the sailing world.

It is located in Malcesine on Lake Garda where the wind blows more than 10 hours every day: the “Peler” from the north in the morning (with average wind speeds between 10 to 30 knots) and the “Ora” from the South in the afternoon (average 10 to 20 knots).

On the waters of Malcesine, many of the strongest sailors worldwide developed into Olympic medallists and world champions in numerous classes. Lake Garda has been host to a number of world championships due to the superiority of the sailing conditions and race organisation.