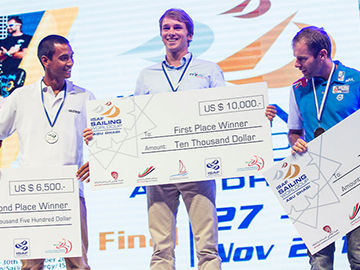 23/04/2015
In another initiative aimed at bolstering the ISAF World Cup concept, €72,000 is to be distributed across the 12 events on show in Hyères when the medals are decided on Sunday 26 April.

ISAF President Carlo Croce said, “We are pleased to be awarding the best of the Olympic and Paralympic sailing world with prize money at ISAF Sailing World Cup Hyères. Alongside the drive to be crowned a Hyères gold medallist and qualifying a spot at the ISAF Sailing World Cup Final, the sailors have an added incentive with the addition of prize money. The list of athletes competing in Hyères is exceptional and over five days of competition I am looking forward to see how the racing unfolds.”

Racing from 22-26 April, the elite level fleets will put their skills to the ultimate test with 40 of the world's best in each class. ISAF Sailing World Cup Hyères marks the first occasion where fleets are decided based on the ISAF World Sailing Rankings and a qualification regatta.

600 Olympic sailors in 400 boats and 39 Paralympic sailors in 25 boats will commence racing on 22 April. A four day racing series will build up to the Medal Races on Sunday 26 April where titles will be won and ISAF Sailing World Cup Final spots snapped up.