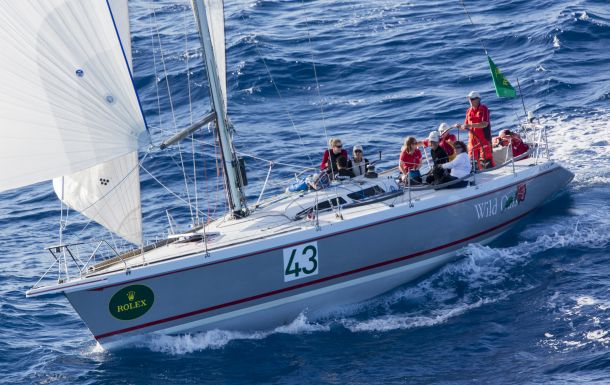 When the Cruising Yacht Club of Australia Land Rover Sydney Gold Coast Yacht Race 2015 starts on Saturday 25 July, it won’t just be a contest between individual yachts – a State of Origin battle is on the horizon.

Of the entries received to-date, all come from NSW and from our friends across the border in Queensland. There are more on the way as they ready to mark the 30th edition of the 384 nautical mile race.

“We just got beaten and finished second in Division 2 at the IRC NSW Championship – I hope that’s not going to be the trend,” Hickman said laughing. “We’re looking forward to the race and taking on L’Altra Donna (Andy Kearnan), and Queenslanders Robbo Robertson and Tony Horkings. Those Northshore’s are quicker than us on some angles,” he said referring to Horkings’ Lee-Way.

“Wild Rose is 30 this year, so we’re celebrating her birthday and the 30th Land Rover Sydney Gold Coast Yacht Race. It fits nicely, because our (with former partners Bruce Foye and Lance Peckman) first race with the boat was the 1993 Sydney Gold Coast Race,” he recalled.

Southport Yacht Club Commodore Phil Short promised at least three yachts would be on the start line to represent the finishing club and true to his word, Tony Horkings’ was among the first to enter with his Northshore 38, Lee-Way for its third tilt at the main trophy.

“I’m particularly looking forward to sailing against smaller boats like ours; Wild Rose (a Farr 43) and L’Altra Donna (a Summit 35). The smaller boats compete really well, and our benchmark is Wild Rose. She’s a bit older than Lee-Way, which was launched in 1992,” said Horkings, a 55 year-old who only took up sailing eight years ago.

“I’m still on a learning curve, but we’ve done a bit of optimising, bought new sails and our Club is right behind us. If we get conditions to suit, we could win,” he said of Lee-Way which has twice won its division under previous names and owners.

For many competitors, there is more at stake than winning the coastal classic, as it is also the first event of the Cruising Yacht Club of Australia’s annual Blue Water Pointscore Series (BWPS) which is bookended by the Rolex Sydney Hobart in December.

At 1300 hours on July 25, the fleet contesting the race will line up at the Nielsen Park start line on Sydney Harbour before turning north at the Heads bound for the Main Beach, Southport, finish line. Along the way the yachts will pass landmarks such as Newcastle, Port Stephens, Port Macquarie, Coffs Harbour and Cape Byron.

Spectators wanting to view the start won’t miss out. COAST will again be at the start line of the Land Rover Sydney Gold Coast Yacht Race. There is no better view than from the top deck of COAST. For details and bookings go to: goldcoast.cyca.com.au/spectators/

Online entry and Notice of Race for the Land Rover Sydney Gold Coast Yacht Race are available via the official race website: goldcoast.cyca.com.au/