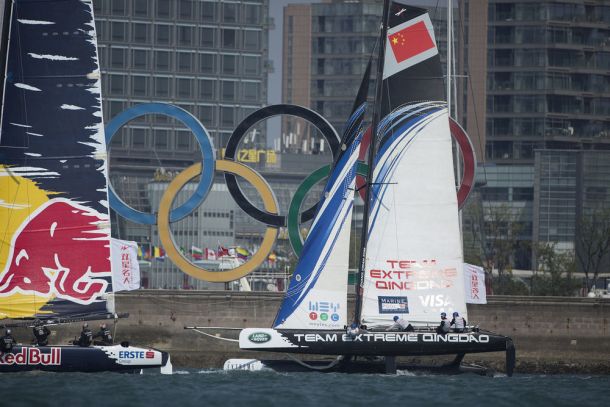 Cheng Yeng Kit (Kit) alongside Liu Ming (Leo) and Kong Chencheng (Kong) will represent their home country at Act 3 of the Extreme Sailing Series in Qingdao, stepping into the intense world of the Extreme 40 racing. Lining up against eight elite sailing teams with 40 of the world’s best sailors from 13 nationalities, the team will be on the starting grid on 30 April for four days of intense competition, as they prepare to lock horns on one of the most notorious racecourses in Extreme Sailing Series history.

Cheng Ying Kit already has an outstanding CV from the America’s Cup to racing in the Volvo Ocean Race and Danish Olympic 49er champion and Extreme Sailing Denmark* skipper Jonas Warrer will be returning to the venue where he won his Olympic gold medal in 2008. Despite only having one vital day of training together before the Act begins, Kit is quietly confident in his teams’ potential, when talking about his Chinese crew. “We train together, we travel together, we have spent the last year together and we know each other really well. Our communication onboard will be our strength.”

Leo and Kong will share duties on the bow, with Artemis Offshore Academy graduate Aaron Cooper (GBR) trimming the mainsail.

For the fifth consecutive year, the fleet will race on Fushan Bay against the dramatic backdrop of the city skyscapers. One of the most notorious venues in the Series, Qingdao is known to throw every kind of weather at the sailors from windy and gusty conditions that have flipped over a few Extreme 40s in the past to calms and even fog, earning itself a reputation as one of the most unpredictable venues on the circuit. Watch the dramatic capsize for The Wave, Muscat in 2011 here.

Encouraging the locals to come and show their support, Kit commented: “The multihull is pretty cool to watch, there’s a lot of risk, the sailors are having to push 100% and there’s no margin for error. It is a really good event for Qingdao. It brings in professional sailors from all over the world to the city, it’s easy to watch for the local people in the city and it’s a cool event for us to promote the sport. It’s really good for families to come and see with the exciting racing so close to the shore.”

*Extreme Sailing Denmark is a potential campaign for 2016 headed up by Jonas Warrer.