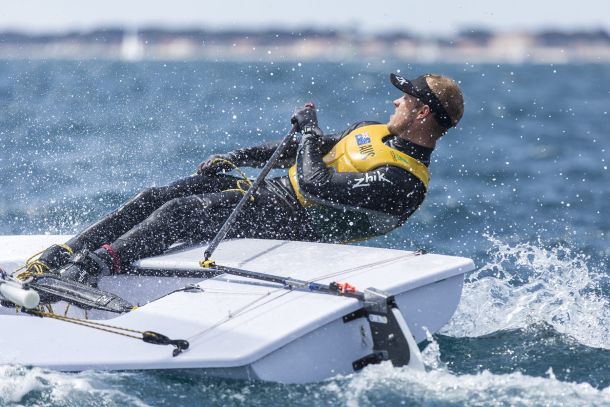 Laser World #1 Tom Burton (NSW) moved up to the top of the leader board on day two of the ISAF Sailing World Cup Hyères in France (22-26 April) after a strong day, posting a third and second place in Thursday’s racing (23 April), which saw winds pick-up to 17knots.

Olympic gold medallists Nathan Outteridge and Iain Jensen did not have the best day and dropped back from first to third after three races in the 49er – Men’s Skiff. Also Nacra 17 day one leaders of Jason Waterhouse (NSW) and Lisa Darmanin (NSW) moved back into third after four races on the second day of the regatta.

World Champions in the Men’s 470 Mat Belcher (QLD) and Will Ryan (QLD) keep their seventh place after a total of four races across two days. As all Olympic boat classes, they have two more days of racing to move up the results ladder before the final top-ten medal race on Sunday.

In the Paralympic boat classes, Australian Sailing’s Sonar team defended their first spot on the leader board ahead of France and Germany and will continue wearing the yellow leader jerseys into the second half of the regatta. Paralympic class racing concludes on Saturday, 25 April.

But he his back in form and aiming to make it a hat-trick in Hyères this year. Thursday’s racing brought him one step closer when he took the lead after posting a third and second.

Tom Burton is chased by teammate Matt Wearn (WA), who won bronze in Miami, finished only one place behind Burton in sixth at Palma and on Thursday beat Tom Burton in the first race of the day.

“It was a good day for me and had a third and a second. The first was a close race with Matt. He beat me and came second and we had a bit of a gap to the guys behind us which was nice. And after getting a yellow flag yesterday it was nice to have a bit of a gap and not have to push too hard.

“I feel like I’m sailing well and only yesterday’s yellow flag really put a dampner on things, but I was going well in the race and I hope it continues.”

Nathan Outteridge and Iain Jensen went into the second race day in first, tied at the top on five points with the current World Champions Peter Burling and Blair Tuke (NZL).

But it was not their day. They capsized in the first race after an incident with another boat, which put them from seventh to 17th (16th after Croatia had to retire), which was followed by a twelfth and sixth place in race two and three.

“There was a fair bit more breeze, which made for some pretty intense racing on the 49er track and there were plenty of crashes and breakages,” Nathan Outteridge said after racing. “Unfortunately for us, we were stuck in the middle of that today. So that was pretty frustrating, but that’s what happens when you’ve got 40 boats, you can’t make errors.

“It’s good though, this is a great practice regatta as we prepare for Rio 2016 and we’re learning a lot and are looking forward to racing again tomorrow. I think it’s going to be a bit lighter for the rest of the week. It doesn’t change the intensity and we’ll see how we go.”

It was a good day for the young guns on the team with newcomer to the Australian Sailing Team Joel Turner (QLD) and his crew Lewis Brake (QLD) moving up eighteen places into 12th after posting a 13th, seventh and fourth place. David Gilmour (WA) and Rhys Mara (VIC) moved into 16th.

Cousins Jason Waterhouse and Lisa Darmanin are a team on the rise with World Championship bronze and World Cup gold under their belt from their last two regattas in the new Olympic boat class Nacra 17.

They had a great start in Hyères picking up a 6-1 scoreline on day one, but day two was a mixed-bag as helm Jason Waterhouse explains:

“We went into the day leading the event. We had one race with a second place and the rest was pretty average. We’re not too happy with the results we got, but we sailed pretty consistently and didn’t have any real, crucial errors, just little mistakes that cut off a few points.

“Overall it was still a pretty good day and we are still sitting in third place and we are going to move back up the leader board again. It was tricky but we had fun.”

“It was another tricky day with mixed results for everyone across the four races,” Darren Bundock said about the day. “Everyone had some good and some bad races and I don’t really know anyone that dominated the day. We moved back up a bit in the rankings, but didn’t have the best results and are still hanging in there just outside of the top ten.”

“Today was very tough with very close racing. The fleet is very competitive with all the top teams racing here, so it’s always very close and challenging but we are happy with the results of a second and third place today,” Colin Harrison said.