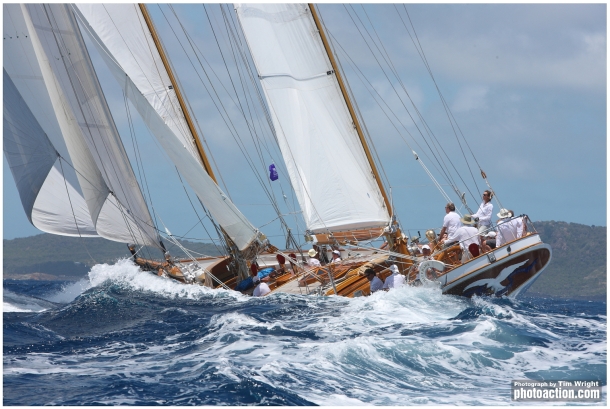 Racing came to a conclusion today at the 28th edition of Antigua Classic Yacht Regatta, sponsored by Panerai. The Windward Course was raced today by all classes and featured a glorious reaching start outside Falmouth Harbour to the deep water Woodstock mark followed by a spectacular downwind surf to Old Road Bluff then a long beat to Cape Shirley. The fleet headed back out to sea reaching to the Woodstock mark in big seas before finishing on a tight reaching leg to Falmouth.

The entire four-race series was blessed with spectacular conditions with 15-20 knots of easterly Trade Winds throughout the regatta. This evening, the Prize Giving Ceremony will be held on the lawn of the Copper and Lumber Store in the historic surroundings of Nelson’s Dockyard, English Harbour. The winner of the Panerai Trophy and the glittering array of prizes will be revealed tonight.

Rebecca, the spectacular 140′ Frers Ketch won today’s race, the third in a row for the regatta, giving Rebecca the class win. Starling Burgess/Dijkstra J Class, Rainbow, was second in class with third being the Joel White designed Dragonera, steered by Sean Lucey. Jerry Bardoe, better known as Chippy, was racing on board Rebecca for the regatta.

“I think I have been to about 20 Antigua Classics, there is no other regatta like it.” smiled Chippy. “The courses are great for these boats with plenty of reaching, as classic yachts are not really made to go upwind. Even if you are a ‘momma and pappa boat’ you can join in; classics suit so many different types of sailors and you don’t have to have a museum piece, the regatta is all about fun. A great memory for me from this edition was this morning. Rebecca was in the starting area and we passed Elena, exchanging pleasantries, then we passed Rainbow and did the same – where in the world are you going to do that – Antigua Classics of course!”

The final race was one of the closest for many years in Vintage A Class. Four yachts were vying for victory for the last race. Griff Rhys Jones’ Argyll was the race winner by just over a minute, after time correction, from Robbie Fabre’s Vagabundo II. Trevor Fretter’s was third just 4 seconds behind Vagabundo II and Mat Barker’s The Blue Peter was fourth. Blackwatch won the class with Vagabundo II holding on to second place by literally 4 seconds from Argyll.

Mary Rose, skippered by Gerald Rainier, scored a perfect four races to win the class. Brazilian schooner, Atrevida was second, just ahead of Richard Oswald’s Coral of Cowes. Gerald Rainier spoke after finishing the regatta. “The rating system in our class worked very well. Yesterday, after time correction, we only beat Coral by 7 seconds and today, we were less than two minutes ahead of Atrevida. Mary Rose is a much smaller boat, which meant that we could get inshore for the lifts off the land but the big schooners had the advantage of waterline length, so the differences evened out. The Mary Rose crew are such fun to sail with. I said before the regatta, the three most important things were: Don’t get hurt, don’t hurt the boat and have fun – we pretty much stuck to that plan.”

“Marvellous, just the right amount of wind and a good sea state, ‘chamber of commerce’ perfect conditions, every day has been just great. We are all friends and we work on staying focused because, as the fastest boat, we are on our own for most of the race. I think that aspect of our performance got better every race.

A big thank you to John Dockery, who owns Whitehawk and Eric Nittmann, the boat captain for bringing the boat down to Antigua, especially for this regatta. Both myself and co-skipper, Ralph Isham are members of the International Yacht Restoration School and many of the crew are members of the Mill Reef Yacht Club in Antigua. We have had a great time and we have all contributed to raise money for a school in Rhode Island.”

The majestic schooner, Elena was the winner of today’s race, sailing the complex course to perfection. Elena was an incredible sight, her extensive sail area was expertly handled by her compliment of nearly 30 crew. However, Robert’s Soros’ Juno had won the previous three races, and being second in today’s race, secured the class win. Bonnie Schmidt and Nigel Bower’s Heron was third.

Sea-Mester’s magnificent schooner, Argos was beaten for the first time in the regatta, with the last race going to the Klaus Roder designed schooner, Kairos. However, Argos won the class with Kairos second and Ashley Kerr’s Windjammer in third.

Andrew Robinson’s Summer Cloud won their second race of the regatta but it wasn’t enough to win the highly competitive fleet of six Carricou Sloops. Alexis Andrew’s Genesis finished second today, the Antiguan team’s consistency throughout, secured Genesis the class win, by just two points from Summer Cloud. Philippe Fabre’s Exodus was third in class but did not finish today’s race after a collision with Eli Fuller’s Zemi. Both crews are safely ashore with no injuries sustained.

After tonight’s Prize Giving Ceremony, the traditional end to the social festivities for the Antigua Classic Yacht Regatta will take place tomorrow with gig racing and cream teas at the Admiral’s Inn, Nelson’s Dockyard. The ACYR Tug of War after the gig racing will be an excellent way to burn off the calories consuming scrumptious homemade cakes!