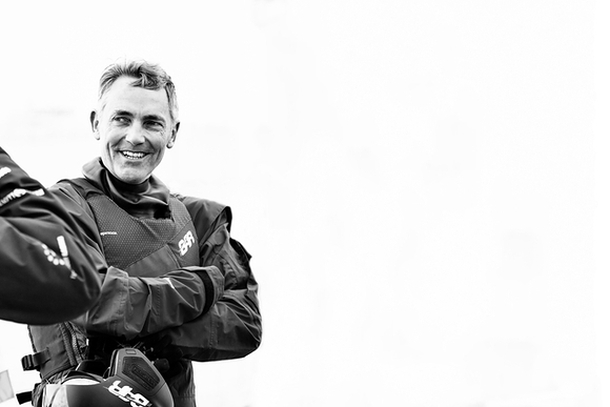 When the head-hunters called one of the aerospace industry's brightest talents and told him that they had an opportunity at a small engineering and racing organisation they probably weren't expecting a very positive response. After all, Martin Whitmarsh was a very young CEO, and a founding director of Aerostructures Hamble Ltd, a wholly owned subsidiary of BAe plc. The job the head-hunters had in mind was tiny in comparison, just a hundred employees and a turnover of £19 million – but it was at a company called McLaren International, whose business was racing Formula One cars.

“It wasn’t a logical career move,” explained Martin Whitmarsh of the choice that defined the next 25 years of his life, “but it was an unavoidable and unmissable opportunity that I had to go and do. Everyone thought I was mad to leave that job – where I appeared to have some success and a large organisation of thousands of people working for me – to join a little team, but I never had time or thought or occasion to regret it.” Twenty five years later, when Whitmarsh left McLaren, the team were employing over 3,000 people and had a turnover of £650 million.

Another year on, and Whitmarsh finds himself at the head of another small racing organisation, and sees exactly the same opportunity for growth. “We grew McLaren within Formula One,” he said, “but we also realised that racing was a volatile business, and if we were going to have a sustainable business, we needed to diversify and use our technology, our capability and, ultimately, our brand to spawn a range of other businesses. And so we founded McLaren Automotive, Applied Technologies, Electronics and all the rest. It was a fairly significant metamorphosis from the race team that I joined. It was an interesting and exciting path.” And one that was already regarded by Team Principal, Ben Ainslie – even before Whitmarsh arrived – as a model for BAR.

Martin Whitmarsh has always had a fascination with the collision between sport and engineering, sport and technology – but this is his first experience with sailing. “I’ve been on boats, I’ve owned some boats, but I’m not a sailor, I’ve not been near any of this before and I find that quite an exciting challenge,” he said. Ironically, this coming summer was to have been his first experience of sailboats. “I thought I was in retirement, so I had arranged a sailboat for the summer. It’s a local boat to my home in France on the Ile de Ré near La Rochelle. Sadly, I had to ring the guy, and say I don’t think I’m going to be down there very much this year.”

Whitmarsh’s sporting interest started with bikes, not boats. He got into cycle racing while he was at school. “I think that sometimes I was more interested in the bikes than the riding. I got interested in weight saving and engineering. The equipment and the sport were interesting to me.” This was the 1970s though, and a career spent developing sporting technology would have seemed a bit far-fetched.

So Martin Whitmarsh took his first job with what was then British Aerospace, working as a structural analyst in composite materials – in carbon fibre. He had academic ambitions initially, but was redirected by those around him into management. His rise was meteoric. He ended up running the Hamble plant as part of British Aerospace, before becoming a founding Director of the newly divested Aerostructures business. And then McLaren came calling.

“If you’re going to go out and recruit the best people into the team, then I think it’s implicit in your duty of care to them that you are going to grow. If you are growing, there are necessarily challenges and demands on people in the organisation and that leads to opportunity. If we said that in ten years time we were going to be the same size and the same organisation, then it’s hard to make a compelling case for people to remain motivated to stay here.”

Martin Whitmarsh is clear about the path that McLaren followed to achieve that growth. “Firstly [at McLaren] we had to make sure we could succeed and win. In any of these environments, to have confidence and credibility you have to go out and succeed in the core proposition, and develop technical capability as you do it. The next step is to say ok, we’ve got an organisation that’s running well, it’s performing, it’s got technology, how can we monetise that? How can we take some of those opportunities and create shareholder value?

“At McLaren, our first developments were largely technical, selling technical services, then we reached a point where the brand had become established in its own right. We’re in a brand conscious world and if you are going to sell to consumers as well as businesses you need the brand.”

Whitmarsh sees a similar path and opportunities for BAR. “The America’s Cup is a fantastic platform from which this team can demonstrate its capability in high technology, in performance, and in achieving things like cycle-time compression. I think we have a great opportunity to demonstrate how the technical endeavour associated with seeking to win the America’s Cup can be the catalyst of change in bigger technical organisations, can be a hotbed for technical development.

“I think it’s our job to ensure that we can capture the essence of that racing culture and tempo and speed of response, competitiveness and creativity. Those are things that are being searched for and worked hard for in big, big technical organisations. We have them, and that’s a valuable asset.”

Whitmarsh is also clear that the recent changes to the format of the Cup are all going in the right direction. “The Cup has been producing great contests for over 160 years, and has often relied on very wealthy benefactors. That’s great if you can find them, and great if you’ve got them, and we should be very grateful for the legacy that those people have funded and created. But if we’re going to have something with a little bit more continuity then we probably need to find a more consistent commercialisation of the sport, with initiatives like the America’s Cup World Series.

“The problem with any form of entertainment – and that’s the business we’re in – is that people have an almost infinite number of choices in how they can spend their leisure time. What I saw in San Francisco – watching as an average punter – was a truly exciting and televisual America’s Cup. And there are those who would say; great we can do it again in four years time. But I think it’s quite difficult to commercialise the sport and grow public interest in it when it only hits awareness once every four years.

“If we want to have the pinnacle of our sport with advanced technology then that costs money, and if it costs money then you have got to find either a rich oligarch who’s going to indulge you, or you develop a business that is actually sustainable because the commercial value of the business exceeds the cost of participation. And as I’ve already said, we owe it to the people here at BAR – who bring their time, energy, passion, knowledge and capability into this team – to see if we can not only win, but develop a business that means that they have a career path and development in front of them. That’s our duty of care to our people.”

Whitmarsh has only been with the team for a few days, but he’s had a chance to have a look around at what’s already been put in place. “I think we’re extraordinarily lucky to have a group of founding investors in this business and we’re very grateful to the investment that they have made. It’s a significant act of faith to believe that we can win the America’s Cup and build a sustainable organisation. People within the team and the investors all believe in it, which is fantastic, now we have to go out and convince everyone else.”

He highlights the new headquarters as being central to that task. “It will do a lot of things for us. It will give us the space to operate, it will co-locate everyone and it will help build our identity. But I think it’s also a statement of intent. When anyone arrives at the new HQ, the state of mind that I think it will produce from its location, the architecture, the scale of the undertaking, and the seriousness of the investment will then be reinforced by the team of people that they will meet as they pass over the threshold. It’s going to be an extraordinary boost in anyone’s belief in this team, and the ability of this island to win a trophy that was created by us 164 years ago, but hasn’t been won by us before.”