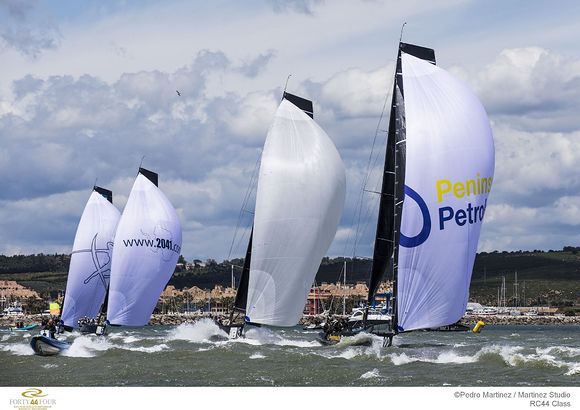 The RC44 Championship Tour enters its 11th season next week in Sotogrande, Spain 27 – 30 April, when eight teams representing five nations, and 64 of the world's finest sailors take to the water to compete in the opening regatta of the five-stop tour.

As the RC44 crews began to arrive the official press conference got underway (Tuesday 18 April) with guest speaker Juan Carlos Ruiz Boix, Mayor of San Roque, taking to the stage: “It is a privilege to host one of the finest circuits in the world once again,” he said.

“With no doubt, Sotogrande is the best port in the south Mediterranean and after our successful debut in 2014 the return of the fleet for the start of the 2017 season is a fantastic way to showcase our location, San Roque, as a venue for sailing, polo and golf events this year.”

Hosted by Marina de Sotogrande for the third time the event title had previously been lifted by Vladimir Liubomirov's Bronenosec Sailing Team in 2014 and Igor Lah's Team CEEREF in 2016, with John Bassadone's 'home team' Peninsula Petroleum reaching the podium but never quite clinching the win on both occasions.

But the appetite for a home victory is still strong within the Peninsula crew. Trimmer German Panei commented: “After a third and a second placed finish, of course, we are looking for the win this year – it is only a matter of time. We will be working hard to gain as much of a 'home advantage' as we can and will be training to ensure we can perform when it counts.”

However, after the most competitive season to date last year you can rest assured that the RC44 fleet is not going to give the title away. Amongst the line-up for the 2017 season, a few strong contenders return. Terry Hutchinson is back on board Team Nika after last leading the team to victory at the 2014 Oman Cup. Morgan Reeser joins Nico Poons' Monaco-based team Charisma and an all new crew for Bronenosec Sailing Team sees Cameron Dunne take on tactician duties.

Here's how the teams are shaping up for the start of the 2017 season:

Going into the 2017 season Team CEEREF is the hot favourite to dominate again. Reliable throughout 2016 this season CEEREF are one of only a few teams in the nine-boat fleet that return with the same crew line-up – the key to their consistent performance.

“2016 was a great year but we know we have to pick up from where we left off in Malta and keep looking for those extra metres here and there,” tactician Adrian Stead explained. “We have areas we know we can improve on for the season, some small tweaks on our tuning and sails, but our goal is of continual improvement to stay at the front.”

Missing out on last year's title by a single point Team Aqua, who have previously led the series with back-to-back wins, is expected to be the primary challenger in 2017. With many of their crew having raced together for the past ten years they are a formidable rival.

It's going to be a busy year for the Artemis Racing crew with the 35th America's Cup in Bermuda falling between the first and second event of the RC44 season. But, their all-star line-up uses the RC44 Championship Tour as an opportunity for team building and with a series of regatta wins and championship podiums under their belt they are comfortably confident for the season ahead.

Katusha made significant gains last year and promise further improvement in 2017 as they return to the fleet with the same crew. This season is going to be all about building on the lessons learnt and breaking onto the end of season championship podium.

Stepping into the role of tactician after several years as the team coach, Cameron Dunn explains: “We are excited about the 2017 season, but are also aware of the mountain we have to climb to be competitive in such an experienced, high calibre fleet. We are very much the 'new team' on the block and look forward to getting in amongst the fleet, learning quickly and seeing improved results throughout the season ahead.”

After a second-placed finish at the RC44 World Championship in Sotogrande last year, no team has a greater appetite to win than John Bassadone's Peninsula Petroleum. A few changes on board see experienced Italian RC44 sailor Flavia Tamiselli join trimmers Oliver Gongora and German Panei as offside trim.

After a decidedly inconsistent season in 2016 Team Nika is back with Terry Hutchinson calling the shots as tactician after he last lead the team to victory at the Oman Cup in 2014. Owner Valdimir Prosikhin, will be hoping for a return to the glory days of 2015 when the team won both the season and the world championship titles.

Stepping into the established crew on Charisma, American Olympian Morgan Reeser will take on the role of tactician and the challenge of converting the potential we have seen from the Monaco-based team into the results needed to climb the overall event leader board.

Racing kicks off on Thursday 27th April join us at www.rc44.com for all the action live.