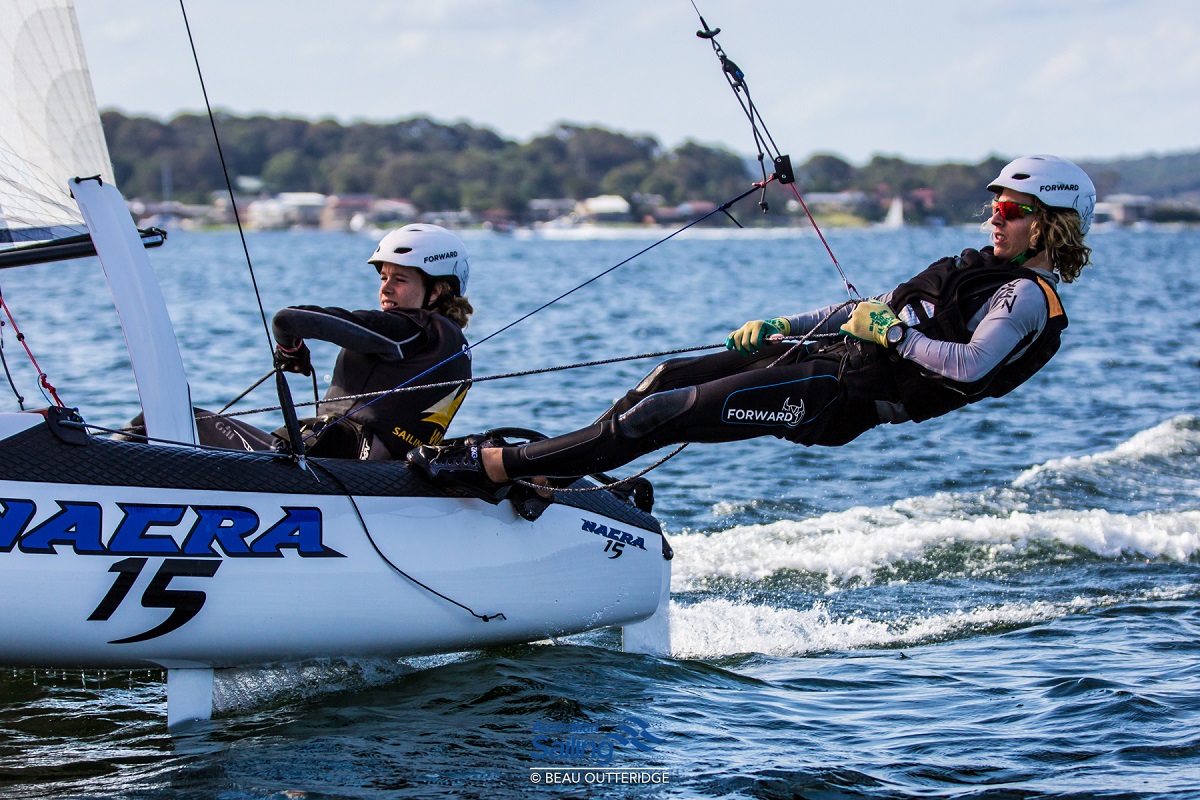 Former Optimist and 420 sailors, Shannon and Jayden relished in the conditions on Lake Macquarie, winning seven from ten races over the course of the regatta.  Having only spent the last four months training in the Nacra 15, the duo negotiated the light and tricky conditions on the Lake flawlessly.

“A lot of hard work has paid off,” said Jayden.  “No one has really had the boats long enough to train and be really prepared, so it was really good to just get out here and see how we went with everyone else.

“We have been training hard at both South of Perth Yacht Club on Swan River, and on the ocean in the lead up to this event.

“The regatta was really quite light and shifty, and the water was really flat which we are not used to.  We haven’t trained in the light breeze that much back home (Western Australia).”

Jake Liddell and Emma Jones from the Cruising Yacht Club of Australia flew the flag for the east-coast of Australia winning three races across the weekend to take out second place. Local Wangi sailors, Jed Fatches and Karma Randall, also capitalised on the conditions finishing the regatta in third place after posting consistent results across the four-day event.

“The Nacra 15 is a new multihull that youth sailors are climbing on board across the country to experience the speed and versatility that it offers,” Mark said.  “We’ve received comments both from experienced multihull sailors and those new to the discipline that this is a great balanced boat ideal for our youth sailors.

“The multihull is a great pathway option for junior sailors coming from Optimists, Open Bics, Sabots and the like, and the event on the weekend highlighted that with such a competitive yet diverse fleet background.”

Next stop for the Daltons will be the 2018 Youth World Championships to be hosted in China this December with their training as a part of the Australian Sailing Youth Team to commence shortly.

“Shannon and Jayden now complete the Australian Sailing Youth Team that will travel to Sanya in China,” Mark said.   “The other team members have been training in their home states since their selection earlier in the year and will come together as a team later in the year for training camps with the three appointed team coaches.”