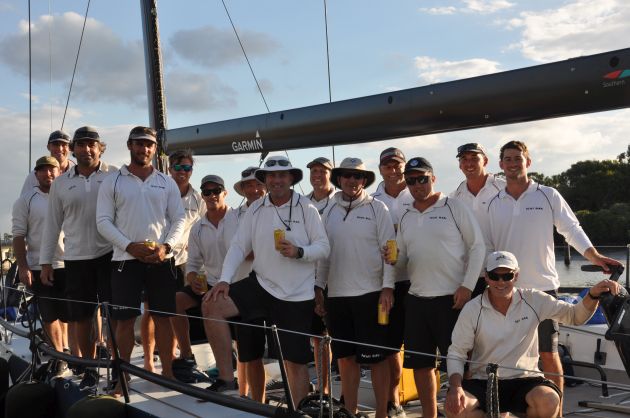 The mix of a fast finishing race combined with the revived Yachties Party resulted in a full yacht club when the winner of the 69th Brisbane to Gladstone Yacht Race was announced as President of Australian Sailing Matt Allen and his Ichi Ban crew.

Black Jack took second spot just missing out on being the only yacht to achieve the “trifecta” of winning three years in a row of both Line Honours and Overall. Despite taking the fourth Line Honours title in a row, Peter Harburg has committed to bringing a new, bigger 100’ Black Jack to next years race as he continues to chase the overall race record set by Skandia fourteen years ago.

Duncan Hine, skipper of Alive, joined the Race from his home base in Tasmania after a successful racing campaign in Asia in 2016 and had a strong showing in all the divisions including a win in the ORCi handicap category. “When the boat is in Australia, we think this is one of the glamour races. This year it was no different, warm, dry and with breeze and if we had champagne we’d have been drinking it too” commented Hine after the presentations “It’s great to have a race that coincides with full moon, making night time sailing easy. We have an enthusiastic team of sailors, which makes sailing FUN.”

Gladstone personality Wistari, sailing in her 49th race, had a dream run to win both of her divisions in IRC and ORCi but missed out on the treble; Flying Colours II trumped the fleet in PHRF.

In the Cruising Division, which continues to grow, Marriah took the spoils with a strong sail. This win helped cement QCYC’s second place in the Federation Cup Teams Trophy beaten only by CYCA thanks to the strong showings of Ichi Ban and Hollywood Boulevard.