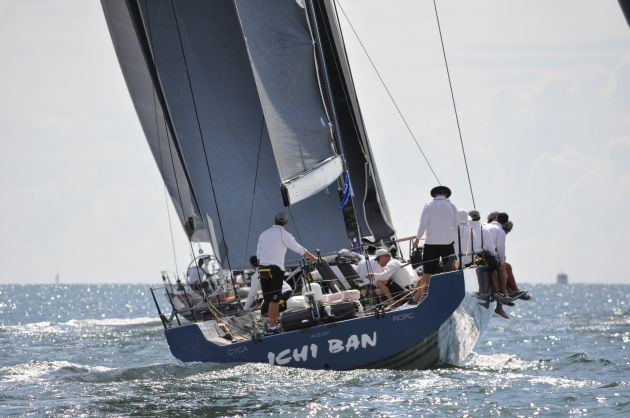 It has been a busy night in Gladstone with much of the fleet capitalising on the 15-20 knot winds throughout the evening and early morning hours and an incoming tide.

Mr Kite and Kerumba had been jockeying for position and fought it out right to the finish line. With less than two miles separating the two for several hours, Tam Faragher’s Kerumba valiantly held on to their marginal lead to finish ahead of Mr Kite.

But the excitement didn’t stop there, with increasing winds of up to 20 knots the fleet gybed their way up the coast line forming somewhat of a gaggle of boats fast approaching the finish line. The 4am period saw boats finishing in quick succession, some just minutes apart. Less than two minutes separated Mayfair and the first of the shorthanded division, Samurai Jack, with Graham Furtardo and his crew aboard Matrix just four minutes behind them.

Fans following on the Yacht Tracker as well as the SES volunteers at the finish line were on the edge of their seats watching what has to be this race’s closest finish times. A mere 17 seconds separated Scamp and Dry White, with Scamp finishing a breath ahead of Darryn Purdy and his team aboard Dry White.

Daylight has broken and those who have finished are settling in to their berth and are enjoying the hospitality of the Port Curtis Sailing Club while regaling their tales to each other.

The Courier Mail Cup is still undecided although the red hot favourite has to now be Australian Sailing President Matt Allen on his boat Ichi Ban.