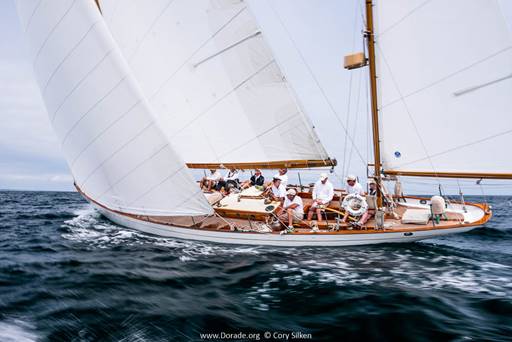 VENTURA, CALIFORNIA (April 20, 2017) — Over the past 86 years, the iconic Sparkman & Stephens classic yacht Dorade has sailed hundreds of thousands of nautical miles across open water and won more ocean races than any other yacht in history.  This year marks yet another milestone for the legendary 52-foot yawl, as she and her crew travel for the first time to the southern hemisphere for the “Dorade Down Under” campaign, with plans to race in seven events off the southern coast of Australia before taking on the 628-nautical mile Rolex Sydney Hobart Race in December.

“We’re looking forward to doing something that Dorade has never done before in a place that neither Dorade nor I have ever been to,” said Captain Matt Brooks who with Pam Rorke Levy purchased the classic yacht in 2010 to demonstrate that a classic racing yacht like Dorade, properly restored and sailed, could still be competitive in the modern racing world. “We have done a lot of offshore ocean racing with Dorade, and I know the yacht and crew are capable, but it will be a challenge nonetheless, especially the iconic Rolex Sydney Hobart which is well known for severe weather conditions.”

Designed in 1929 by 21-year-old Olin Stephens and built under his younger brother Rod Stephens’ supervision, Dorade’s revolutionary design – a deep keel with external ballast, an achingly narrow beam of just 10’3”, and a generous sail plan – took the yachting world by storm, quickly establishing the Stephens brothers as two of the sport’s most gifted innovators.

In 1931 the brothers raced Dorade in the Transatlantic Race from Newport, Rhode Island to Plymouth, England, competing against much larger boats owned by some of the world’s wealthiest sportsmen and crewed by veteran sailors. An upset victory that made headlines around the world, Dorade was the first boat to finish by a margin of more than two days.

In the decade that followed, she continued topping the charts in some of the world’s most renowned offshore events, including overall victories in the Fastnet, in both 1931 and 1933, and the TransPacific Race in 1936.

Like Dorade’s predecessors, Brooks’ spirit for adventure knows no boundaries; he had already accomplished momentous expeditions both on land and in the air; he is a gifted aviator, holding multiple circumnavigation speed records, and a seasoned mountaineer with many first ascents under his belt. His successful track record for organizing ambitious campaigns and recruiting a team comprised of the best people helped turn Dorade’s campaign into a reality. “Whether it’s scuba diving, flying, mountain climbing or sailing, my main goal when doing it is to enjoy the outdoors and always take the road less traveled.

“We looked at a lot of boats when we were planning to start campaigning and racing, and many may have been a better fit, but when we saw Dorade it was love at first sight, and we are grateful for all the places Dorade has taken us.” said Brooks, who with Pam Rorke Levy, spent a year restoring Dorade to its original condition before kicking off the “Return to Blue Water” campaign.

Their goal with the campaign was to repeat all of the major ocean races the yacht had won in the 1930s, matching or bettering her original performance in the Transatlantic, Newport-Bermuda, Fastnet and TransPacific ocean races. The campaign was successful beyond their wildest dreams, with the team not only bettering Dorade’s original times in all of the races, but also reaching the podium in every race and winning the 2013 Transpacific Yacht Race overall on corrected time, 77 years after Dorade won that race for the first time.

In 2015, the campaign wrapped up with stellar performances by an all-star crew, placing second in class in an exceptionally rough and windy 2,800-mile Transatlantic Race, followed by second in class in the Rolex Fastnet Race, where Dorade finished 7th overall out of 356 boats.

The “Dorade Down Under” campaign presents a new set of challenges in unfamiliar waters, with the Dorade team facing the heavy breezes and tricky conditions that prevail in southern waters, competing against a fleet of modern boats optimized for these conditions.

“The conditions are likely to be much rougher than what we’ve experienced with Dorade in the past, so we’re going to try and find conditions like that to test in and see where we can find improvements,” said Dorade tactician Kevin Miller.  After several months of updates over the winter, Dorade was transported to Ventura, California this spring to begin final preparations for racing in extreme conditions, including a series of races along the west coast of the US, before being shipped to Australia in June.

“Dorade has always proven to be a really strong boat, but this will be a tougher test of the boat than even the Transatlantic in 2015,” says Miller.  “We need to make sure the boat is bulletproof. We’re going to be dealing with volatile conditions and a serious wind-against-tide component when we get down there, so we need to work on our upwind speed in heavy air and make sure our instrumentation is perfectly calibrated. If our instruments are even just a tiny bit off, any information we get regarding the tide will be completely inaccurate.”