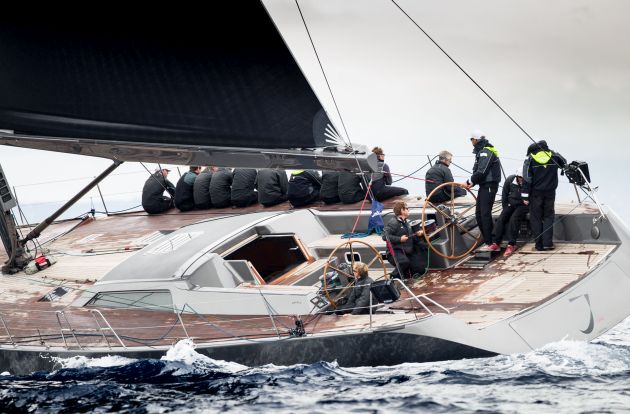 Over the four days of racing the winds might have been less regular and reliable than previous years but that kept up the tension to the end in most of the key classes.

The nine strong TP52s fleet, revving up for their racing season which starts in Italy in just over two weeks, had looked set to be a comfortable win for Quantum Racing. The 2013 and 2014 champions faltered with a sixth of seven finishers in the first race of the day. But a well executed comeback win in the seventh and final race of their series ensured Doug DeVos’ team secured the Palma title, complementing the Copa del Rey MAPFRE title they won in August last year.

A strong Wally class of 11 boats also went to the wire. Victory in the last race, contested in a lazy Sunday afternoon, shifty breeze, was enough for Jean Charles Decaux’s Wally 77 J One to win overall by a only one point from Philippe Ligier’s Wally 80 Ryokan 2. Under handicap time correction the Maxi class found the J Class Lionheart simply unstoppable, the crew headed by Bouwe Bekking winning all six of their races. And in the One Design classes the winners of the Swan 45 fleet was Christian Plump’s Elena Nova counting three first places and a second.

Beating the weather
The regatta delivered a good range of conditions, even if the sunshine and sea breezes did not prevail as they usually do on the Bay of Palma. Summing up the challenges and reasons the regatta exists, the Real Club Náutico de Palma’s Sports Director Manu Fraga confirmed:

“ We are pleased with the participation, over 110 entries from 17 countries turning out on the racecourse. For us it is very important that the international racers choose to come here and open their season here, with us at the Gaastra PalmaVela. This was a regatta born for the Maxi and Wally classes and it is still well supported by those fleets and the TP52s. And the response of the local fleet is also good.”

“ It is not easy to coordinate four racecourses, with boats ranging from 3 to 43 meters… We have to adapt the racing areas to the needs of each fleet: professional, amateur, adaptive sailing… But all in all, the things went well, considering the weather didn't help. Normally, May brings 70-80 percent of chances of sea breeze, but in the end that didn’t really happen for us all!
“ And then we had the rain… Even though, we have had better regattas I think the crews enjoyed racing this time.”

Wally: “We Loved It”
The Wally class title was wide open when the fleet went afloat this morning for their two scheduled windward-leewards. If the changeable, mainly light and sticky conditions made it tough for the big boats especially to hold their time allowance, the intensity of the fight between the Wally 77 and 80s undoubtedly helped them raise their level. Philippe Legier’s Wally 80 crew on Ryokan were the best scoring boat of the day with a first and second but J One’s Race 3 victory earlier in the regatta was as decisive as their triumph in the series’ final race.

J One’s tactician Jens Christensen smiled: “This is a big thing for us because several times we have been in a position to win and it did not happen because it was a big boat race. And so it is great for the owner and crew to win the regatta. We don’t feel we won by luck but because we sailed well. I think this has been the best Wally regatta we have ever participated in because of the closeness, especially with 80 footers. We loved it.”

TP52: Quantum Racing ride the roller coaster again but win overall
Quantum Racing clinched the Gaastra PalmaVela TP52 title with a victory in the last race, proving they are getting ever-closer to being ready for the 52 SUPER SERIES which starts in Scarlino, Italy in just under three weeks time. Azzurra, winners of this regatta last season, and the world and 52 SUPER SERIES champions served a salutary reminder to Quantum Racing – not that it is needed – of how close this year will be. The team which represents the Yacht Club Costa Smeralda won the first race today, leading off the start line. By taking fourth in the final race they secured second overall some six points off Quantum Racing’s winning score. Vladimir Liubomoriv’s Bronenosec finished strongly with 3,2 today to take third.

Ed Reynolds, the project Director for Quantum Racing: “We always want to win and so to do so here is important. But we came here to learn and to prepare and expose our weaknesses. So while it is a thrill to win it was important for us to be able to integrate new crew members into the team. We has some really good races and some tough ones. But I am absolutely confident we are in much better shape to go to Scarlino (the first 52 SUPER SERIES event) and win. The fleet is so close, so tight. I am amazed how even the smallest moment of misunderstanding or misinterpretation can mean losing two or three boats. It is that tight. All of the little things are so critical. But no one in this fleet is more driven to win.”

Maxi: Invincible Lionheart
Lionheart kept their unblemished winning record intact in the small Maxi class winning both windward leeward races. The ‘up and downs’ programme was a key reason for the J Class team’s decision to compete here, representing excellent training for their upcoming season and beyond. Tactician Bouwe Bekking remarked:

“Overall it was a good practice regatta for us and today it was good and important to sail the up and downs. This is a good regatta and it was great for us all to be back sailing in Palma.”

One Designs: Swan 45 Rivalry Rekindled, Elena Nova wins
An enduring all German duel at the top of the Swan 45 class saw Christian Plump’s Elena Nova do enough to win the class by finishing third in the one race sailed today. A crucial fight back proved vital to their overall victory, holding one point ahead of Early Bird.

Plump explained: “I am very happy about the performance of the boat and the crew. We worked well and have sailed together for many years, some of us for 15 years together. The crew work and the weight management and the manoeuvres are good. It feels smooth and easy. We know Early Bird well and compete against them all the time. Last year at Copa del Rey MAPFRE we won and here again. It is a nice rivalry and if they were not there we would need to invent them! At the worlds we were on the same points and they won by one point at the worlds.”

In the J80 Class five wins from eight starts is the foundation of overall victory for Javier Chacartegui Cicerol’s HM Hotels. Javier Scherk and his crew closed out their win in the Dragon class on Gunter and David Barber’s Fine Fettle won the Flying Fifteen class.

IRC and Singular Kitchen ORC: Music Turn It Up Loud
In the IRC Class Ruedi Huber’s Baltic 50 Music finished as they started on top of the class, winning by two points. In ORC Class 0 the victors are Dr Luis Senís’ Swan 45, in Class 1 Fyord Maverta, a Rodman 42. Class 2 saw Scott Beattie’s British crew on the J 97 Just the Job fight back from an OCS in the first race to win their class. The First 31.7 Sirpy triumphed in Classes 3-4.