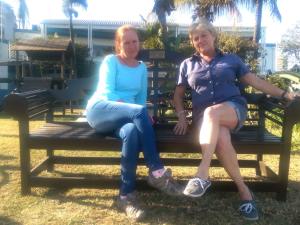 This story by Mphathi Nxumalo of the Daily News in South Africa gives a great insight into the trauma of a “missing at sea” situation for the relatives and emphasises the need to carry EPIRBs, satellite phones and other communication gear when embarking on a bluewater passage:

Durban – The discovery of a hull believed to belong to the missing Sunsail RC044-978 has opened old wounds for the families of the Moquini yachtsmen.

A hull, suspected to be the Sunsail, was spotted 600 nautical miles off Port Louis, Mauritius, about two weeks ago and, although it has yet to be conclusively identified, hope is fading for its crew, Anthony Murray, Reginald “Reg” Robertson and Jaryd Payne.

The Moquini went missing 10 years ago during the Beachcomber Mauritius to Durban Yacht Race. It was found five months later, in February 2006, but with no sign of its crew of six.

Gail Dickerson, who lost her son, Sheldon, and nephew, Mark, and Sandy Samways, who lost her husband, Kurt, on the Moquini, have shared some of their experiences of what they went through.

Speaking to the Daily News at Durban’s Royal Natal Yacht Club, they said they understood what was going through the minds of Vijay Naicker and Storme Robertson, girlfriend and daughter respectively of Reginald.