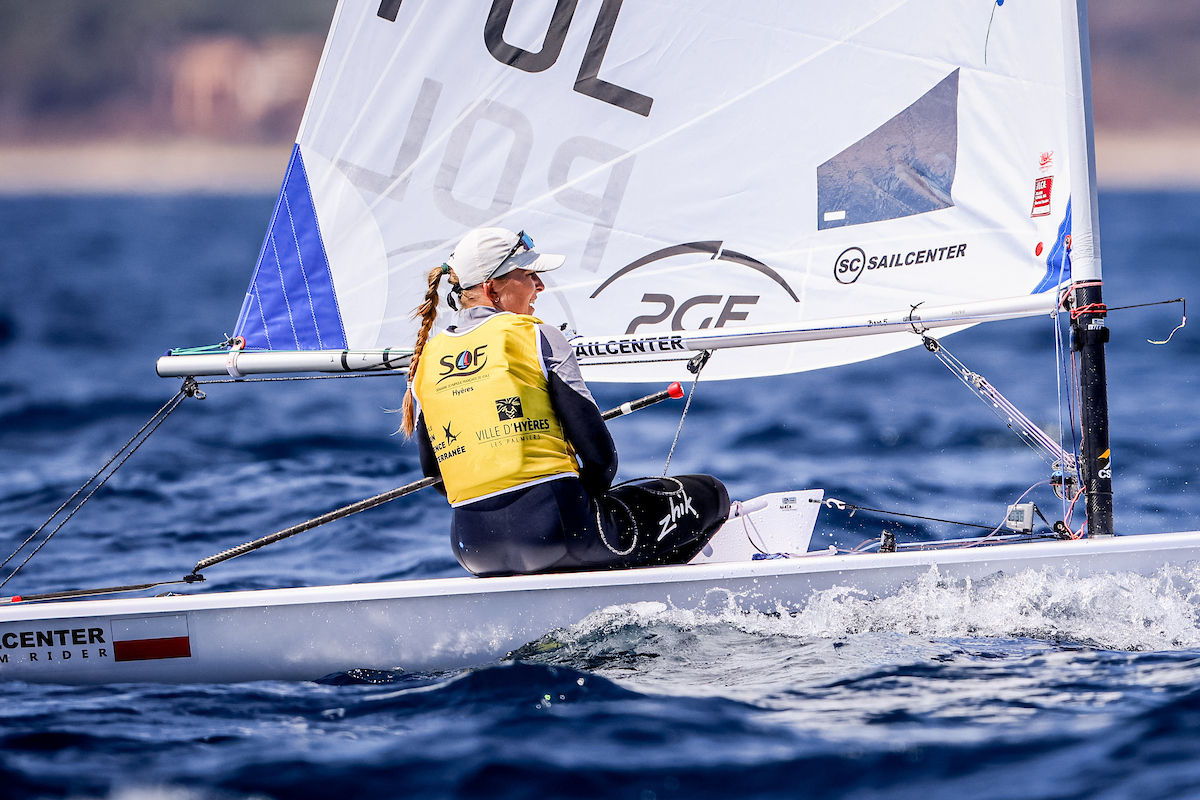 The 53rd Semaine Olympique Française de Hyères - Toulon Provence Méditerranée, is back from April 23 to 30, 2022. Once again, the Olympic sailing elite will be in Hyères for one of the most anticipated events of the season. For the first time in France, the SOF will bring together on the Hyères field of play the 10 classes that will be present in Marseille for the Paris 2024 Olympic Games. © Sailing Energy / FFVOILE

Poland’s Agata Barwinska took the first gold medal of the 53rd Semaine Olympique Française de Hyères – TPM with a mastery of light winds and match racing in the Women’s ILCA 6, while Dominik Buksak and Szymon Wierzbicki, who lead the 49er by 17 points should make it two gold medals for Poland tomorrow.

The men in the ILCA 7 (former Laser) will have a very different time in what promises to be the tightest Medal Race on Saturday.

It was another glorious day of unending blue skies in Hyères, but the shift right from 6-8-knot offshore northeasterlies to a bigger south-southwesterly breeze did not materialise and many struggled for consistency as they watched their podium places disappear.

Everyone in the Medal Races tomorrow will be eyeing the weather nervously with strong westerlies forecast for the afternoon after very light conditions in the morning, will they arrive in time for the racing?

Women’s ILCA 6
Poland’s Agata Barwinska has won Gold a day early. She leads France’s Marie Barrue by 21 points, so cannot be caught. In the Medal Race. Barwinska started the day with a 35-point lead and finished 20th and 14th in the two races of the day, as she was covering her rivals in both and did what she needed to do.

Belgium’s Emma Plaaschaert, fourth at the Tokyo Olympics, was 21st in the first race and Sarah Douglas, the winner in Palma, 30th. Then Barwinska moved on to Barrue.

Barwinska said, “It was an average day of results for me, but for me it was more about keeping an eye on the others because I had a big lead.

“In the first race I kept an eye on Belgium and Canada. In the last race it was all about keeping an eye on Marie Barrue. We finished very close, so that should be good, but for the final ranking.”

Men’s ILCA 7
After a tumultuous day in light winds, the leaderboard dramatically concertinaed with just three points separating four boats. It is a winner-takes-all battle for top three of Philip Buhl, Pavlos Kontides, level on points and Michael Beckett, two points behind.

Following his dispiriting Thursday, Britain’s Beckett fought back in fine fashion, winning both of his races and leaving some big names in his wake. And his fellow Briton, Elliot Hanson, finished 3-2 and is very much in striking distance, one point behind Beckett.

Philipp Buhl, Germany’s 2020 World Champion had his toughest day of the regatta so far, finishing 29-19. But Australia’s Olympic champion, Matt Wearn, could not take advantage with 14-15 results.

Wearn, the Tokyo Games gold medallist and silver medallist from Palma, has dropped to sixth place, 16 points behind Buhl. However, if the front four get involved in a match race, do not write Wearn off. Kontides, the first Cypriot to ever win an Olympic medal (silver at London 2012), and the most experienced of the quartet, will fancy his chances.

Michael Beckett: “I didn’t feel like I was doing anything particularly badly yesterday, I was just making small mistakes that turned out to be really costly. Today I got rid of those small mistakes and suddenly everything fell into place and it was fantastic.

“I was starting a bit better, I got to the windward mark in the top 10 both times. In the first race I think I was ninth and in the second I led the whole way round.

“It’s just so much easier at the front; worst case scenario you lose a few and you’re still coming fifth, whereas a couple of mistakes in 20th can see you in 40th literally just like that. It’s ruthless.

“I’m looking forward to tomorrow’s medal race. Elliott (Hanson) my team mate had an awesome day as well. I’ve been racing round with him all day.”

Philipp Buhl: “It wasn’t a great day, especially if your errors were right at the start. It helps to keep your lane for five minutes, or even two minutes.

“If you look at the results during the week it seems I’m dominating, but you know there’s another two races which are exactly as much value as the ones before. Knowing how quickly it can go wrong and you can do one and then two average to bad races, I was always quite realistic. Obviously, I was hoping to do better than one discard and one average.

“I guess I’m still having a good week and still in the game,” Buhl ended.

470 Mixed
With only one race possible, as the wind dropped off, Sweden’s Anton Dahlberg (Silver in the Tokyo Olympics) and Lovisa Karlsson held onto their lead but saw it cut to just three points ahead of France’s Hippolyte Machetti/Aloise Retornaz going into the Medal Race.

The Swedes were fifth in the race, the French third and Austria’s Lara Vadlau/Lukas Mahr won it to move into third place, seven points behind the Swedes. The big losers of the day were Germany’s Luise Wanser/Philipp Autenrieth, who after finishing 13th in the last race on Thursday, were also 13th on Friday. They are now 14 points behind the Swedes.

49er FX
Everyone has been looking over their shoulders saying: “The Brazilians are coming!” Well, on Friday they arrived to seize control of the leaderboard, finishing 2, 1, 2 in their three races, as their rivals splintered around them in the light conditions.

Brazil’s double Olympic gold medallists (Rio 2016 and Tokyo, Martine Grael and Kahena Kunze, look fully in control of their boat and the regatta now after the capsizes of the big winds on day one.

They lead by nine points from Vilma Bobeck/Rebecca Netzler (SWE), the overnight leaders, who finished 8, 5, 8 today. They may have a bigger battle to keep Silver. Stephanie Robe/Margaret Shea (USA) scored 6, 9, 7), so are three points behind the Swedes in third, with Wednesday’s leaders, Helene Noess/Marie Ronningen (NOR) eight points further back.

Martine Grael: “The Medal Races are normally a little bit tricky, because when it’s double points, it’s normally not just the first one behind you, you have to worry about the other ones as well. We have two boats that can still get us. It’s tricky, but we’re so happy because today was such a good day for us.

“We had a combo of good starts and good boat speed and that gave us choices on the race course, which today was quite important because it wasn’t fixed on one side. There were big pressure differences on both sides.”

Men’s 49er
Poland should claim a second gold tomorrow with Dominik Buksak/Szymon Wierzbicki maintaining a 17-point lead over USA’s Nevin Snow/Maximiliano Agnello, with the Danish unable to maintain their charge from Thursday.

The Poles finished 9, 23, 9 today, but because they have had such a solid week, they were able to discard the 23. The Americans were third and fourth in the first two in the light, tricky winds, but Buksak said they were watching them more closely in the in the last race where they finished 14th to leave them a mountain to climb.

France’s Erwan Fischer/Clement Pequin finished the last race in second, three points behind the Americans and should battle for the other two places on the podium as they are 16 points ahead of their fellow Frenchmen in fourth.

Buksak: “We didn’t want any fireworks today, but just to sail properly and we managed to be twice in the top 10 and we have a really low discard, so it was enough to stay in the lead with the gap we had.

“During the first upwind we just wanted to be ahead of the fleet because it’s most important in these conditions. But on the last upwind we were looking around at our main opponents and especially in the last race we tried to stay between them.

“It’s a comfortable lead and we are feeling really good in all conditions. We’re feel very confident.”

Kitefoil Men’s
Singapore’s European champion, 15-year-old Maximilian Maeder, finished top of the leaderboard after 3, 2, 1, 2 results in his four races on Friday and needs just one win in the Final Series tomorrow to take Gold (see format below).

Kitefoil Women’s
USA’s five-time and reigning world champion, Daniela Moroz, underlined her dominance before the Final Series with four wins out of four on Friday to make it 11 out of 20 this week.

Moroz finished 21 points ahead of France’s Laurianne Nolot, who was second in the last three races. That took her above fellow Frenchwoman Poema Newland and straight into the last race of Final Series tomorrow.

Final Series format:
The top 14 in the overall ranking go through.

Semi-finals: Two separate races for the riders ranked 3-14. They carry more points into the race depending on where they finished (1pt for the third and fourth place in the overall ranking; 6pts for the 13th and 14th). The riders with the lowest score from the overall ranking added to their ranking in the semi-final race will go through to the final.

Nacra 17 Mixed
Italy’s Olympic champions, Ruggero Tita/Caterina Banti, the coolest cats on the Cote D’Azur, look to have another Gold in the bag with a 14-point lead over Britain’s John Gimson/Anna Burnet going into the Medal Race.

However, even the Italians found the conditions tricky and finished 1, 6, 4 in their three races, but the British duo could only close the overall gap slightly with 3, 5, 1.

Finland’s Sinem Kurtbay and Akseli Kiskenin struggled with 9, 1, 10 and are 16 points behind the British. But the podium is set with the New Zealand boat in fourth 27 points behind.

Tita: “We will try to do our best, have a good start and be on top. It’s doesn’t feel easy , as you can see today, we made some mistakes at the start and of course we paid for it. It’s a competitive fleet, for sure we have a little advantage in the foiling upwind, but this is going to disappear soon because everyone’s training hard and will find their speed.”

iQFOiL Men’s
France’s World and European champion, Nicolas Goyard, has been completely dominant all week and is guaranteed a medal tomorrow, but only Gold will interest him. Goyard added two more wins (in the only two races possible in light winds) on Friday to make it 11 wins in a row, finishing 29 points clear of fellow Frenchman Clémont Bourgeois.

The Final Series (see format below) gives everyone in the top 10 a chance to fight their way through to one grand winner-takes-all final with three riders.

iQFOiL Women’s
Hélène Noesmoen has been as dominant as her compatriot and fellow World and European Men’s champion, Goyard. She won both her races yesterday, making it 12 wins out of 16 this week, to finish 24 points clear of Poland’s Maja Dziarnowska, herself 17 points clear of third.

Final Series format:
The top 10 in the overall ranking go through.

Semi-final: One race. Four riders. The top two from the QF compete against 2nd and 3rd overall. top two go through.

Final: One race, three riders. The top two from the SF compete against the 1st overall to decide the podium places.