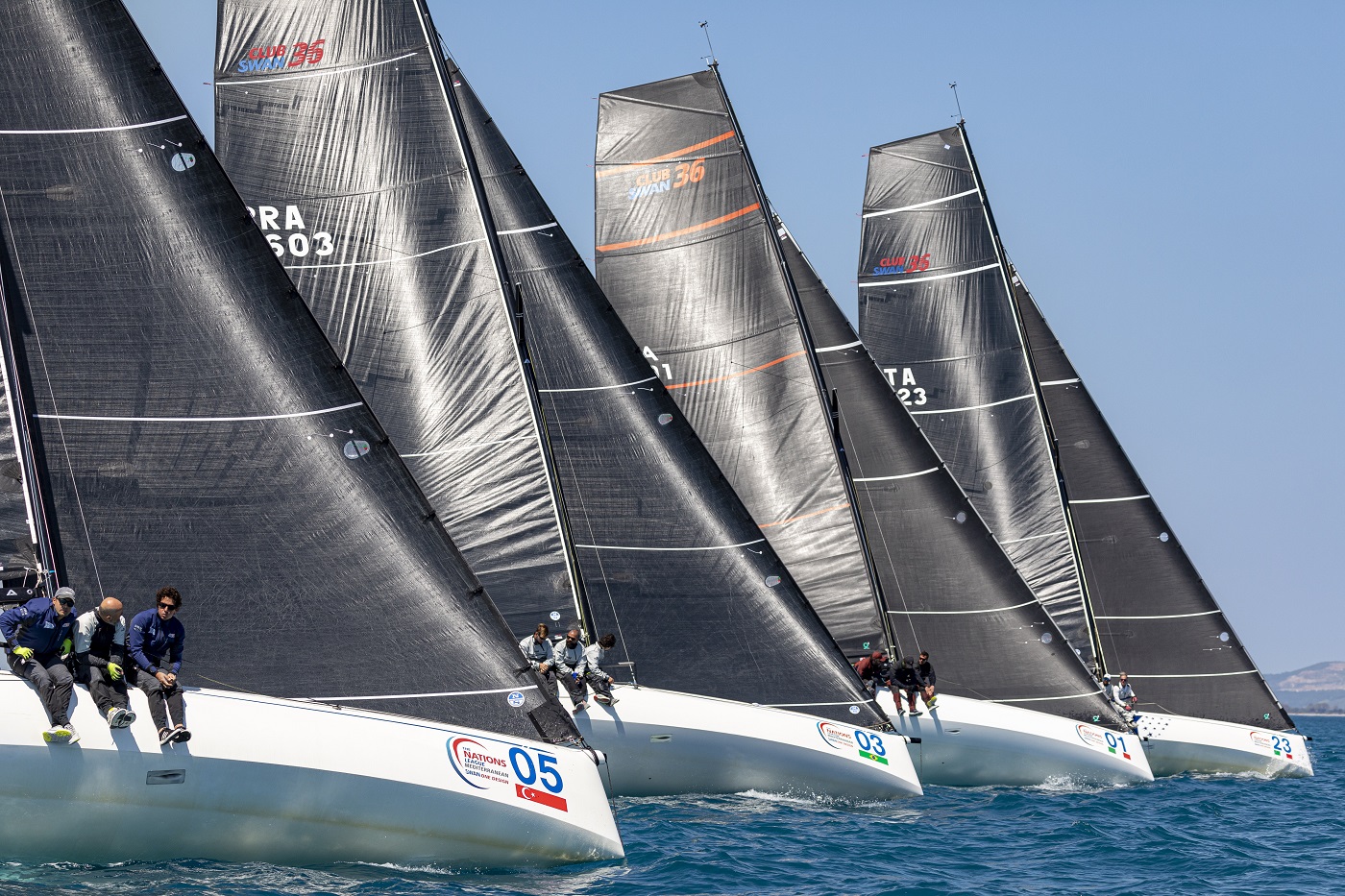 Racing away on the penultimate day - Studio Borlenghi pic

Another round of competitive racing at the Swan Tuscany Challenge today resulted in race leads and class leaders changing and then changing again as the ClubSwan Racing teams battled it out for places and points on the Gulf of Follonica off Scarlino.

With the final day looming, the pressure was on to gain a foothold at the top of the leaderboard, though the results revealed that consistency was hard to maintain given the level of competition in the evenly balanced one-design fleets.

In the first ClubSwan 50 race, Graeme Peterson’s Moonlight added her name to the winners’ roster. Meanwhile, Marcus Brennecke’s Hatari moved to the top of the table, thanks to her second place, although only on countback she is on level points with Cuordileone.

The next race almost delivered a new winning team, only for Alberto Franchi’s Giuliana to be pipped at the post after leading the fleet around the course by Stella Maris. It was a third win for August Schram’s crew at the Swan Tuscany Challenge, returning them to the top spot.

As if to highlight the varied fortunes at the heart of one-design racing, in the next race both earlier winners – Moonlight and Stella Maris – started early and had to go back to restart. Their luck returned when a major wind shift meant the race was abandoned.

After the restart, the variable wind meant the lead changed several times. This time Giuliana held off Balthasar and Stella Maris to take a well-deserved first victory when the course was shortened at the top mark.

“Today was a great day for all the crew. We have the set-up of the boat right now, and we have found solutions on how to win races,” Franchi said. “It’s a fantastic class and very competitive.”

Stella Maris ended the day at the top of the table, though only two points clear of a consistent Hatari, which delivered a 2-3-4 scoreline. Cuordileone, helmed by Leonardo Ferragamo, is in third spot going into the final day, a single point ahead of Giuliana, whose 5-2-1 results made her the day’s top boat in the ClubSwan 50 class.

In the ClubSwan 36 class, the leading trio are split by a single point, with Haakon Lorentzen’s Mamao – the third occupant of the top spot in three days – level on 23 points with overnight leader, Giangiacomo Serena di Lapigio’s G-Spot, after an impressive 2-1-2 scoreline.

“The only surprise is that we are doing so well, and I didn’t know we were at the top,” said Lorentzen, who has raced with his largely Brazilian crew for 10 years. “But every day is a different day, so we’ll see tomorrow.”

Mehmet Taki’s Turkish-flagged Facing Future is just a point behind, with a nine-point cushion back to Edoardo Pavesio’s Fra Martina and John-Christian de Champs’ Cuordileone, tied on 33 points apiece.

Off the water, the main attraction of the evening is the Crew Dinner Party, held in the Il Tarantella pool bar and sponsored by Banor Capital Ltd, a partner of the ClubSwan Racing 2022 One Design circuit.

The party will also include wine tasting courtesy of Ferrari Trento, the event’s Official Sparkling Partner.

At the daily prize-giving, prizes were presented by Randstad, with a special award from Ferrari Trento, both ClubSwan Racing partners.