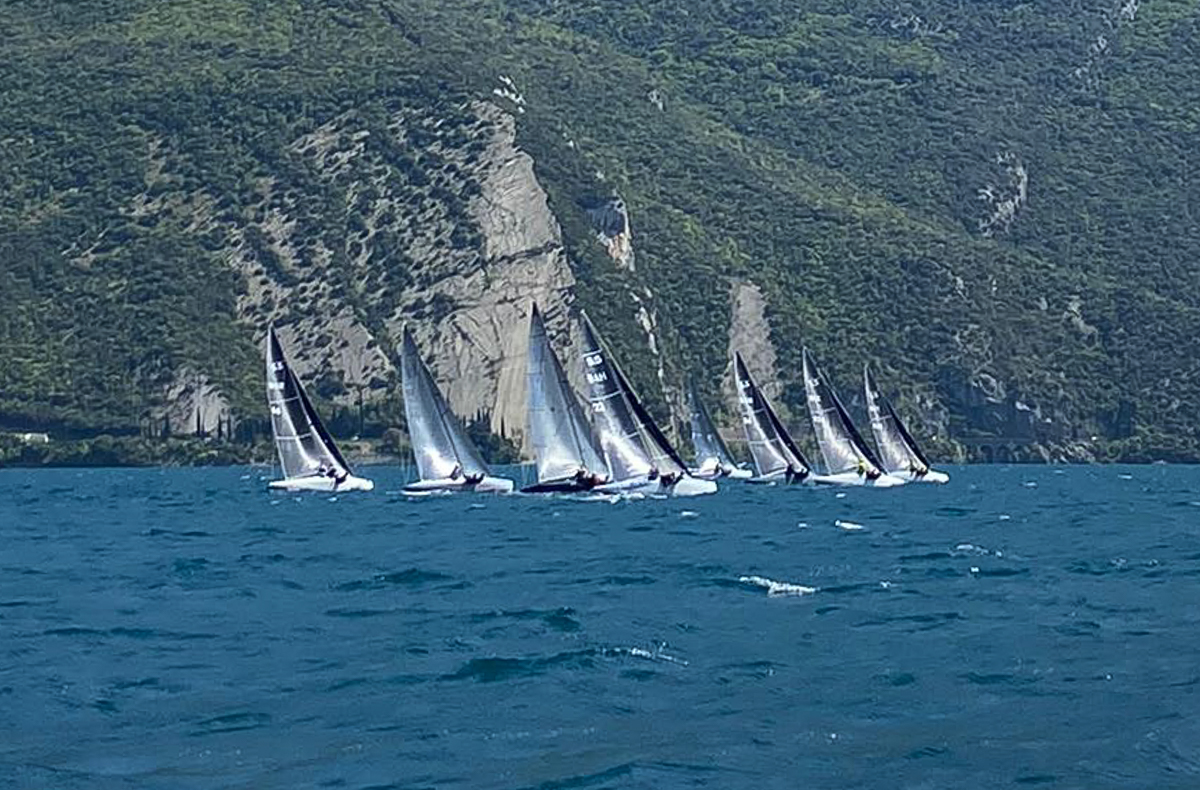 It was another classic Garda day with a building breeze and a favoured right-hand corner.

In Race 4, Helly Hansen won the boat end and was first to tack to the right, rounding ahead of Jean Genie and Aspire. There was a close battle between the top four, but Helly Hansen extended a few lengths on the first downwind and held off the pack to finish first.

Jean Genie led Race 6 from start to finish in the windiest race of the day. They stretched their legs and took another convincing win from Helly Hansen and Aspire to make it four wins from six races.

Race 4 winner, Kristian Neergard, said, “It was a beautiful day with no clouds, 14-22 knots, really, really nice when you get sailing like that on Garda.

“We had good starts, pretty much favoured to the right, especially at the end, though early on you could go a little to the middle and still hang there, but approaching the top mark, it was about staying on the right up on the layline.

“The downwind was a little skewed, so gybing at the top was the thing, and there were a couple of Chinse rolls from some boats, but it was a great day.”

The team is sailing a new boat this weekend having taken delivery of Dieter Schon’s Momo to replace the older Artemis XIV.

“I couldn’t tell any difference between the two boats in these conditions. They feel really similar, but we will see in the other conditions,” said Neergard who is looking forward to this year’s Scandinavian Gold Cup and World Championship at his home club in Hankø, Norway.

“With the two training camps we did in Cannes and going to Glucksberg for the German Open in June, I think all of that will be good training and a good tune up for the Championship. Being on the home course could be seen as an advantage, but Hanko is not like that and so it’s going to be challenging, but we are really looking forward to it.”

As the skipper on board regatta leader, Jean Genie, James Howells is sailing his first 5.5 event and really enjoying the experience. With extensive experience in the Etchells he is impressed with the standard in his new class.

“I’ve sailed an Etchells for 20 years and this is my first time in a 5.5 Metre and I am thoroughly enjoying it. I’m slightly surprised with the depth and breadth of talent and expertise through the class. The number of Olympians, Star sailors and other good sailors in the class is spectacular, even perhaps better quality than the Etchells fleet.

“But the joy for us is having GBR 42, the Hollom boat, which seems to be incredibly competitive, certainly in this wind range, which is what Morty had it built for. Between 10 and 16 knots and in the slight chop on Lake Garda it is a fantastic boat and copes with all that really well.

“I think we have a speed edge over the Schmidt boats, which was everyone’s goal and given the amount of resources and people that have come together to make this happen, it’s great and I am super pleased for Morty that it’s worked out. I am sure it will be going even faster when he gets his hands on it.

“Today, we again found that in the classic Garda conditions GBR 42 has a competitive edge, despite some conservative starts we managed to find good lanes to the favoured right-hand side and allowed the new design to show its pace.”