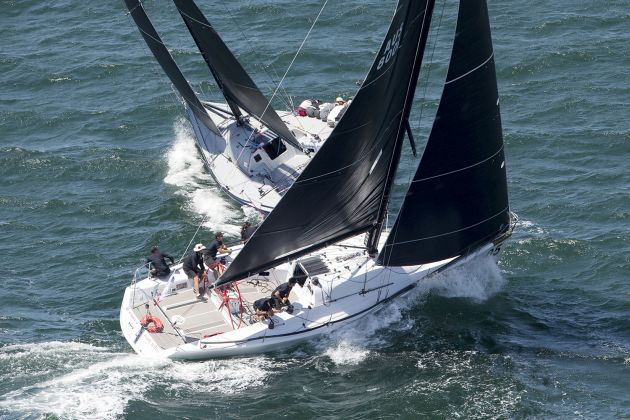 Plenty (Alex Roepers), the 2014 world champion, held onto the lead with 18 points from 1-5-3 placings, by a point from 2012 world champion Flash Gordon (Helmut and Evan Jahn), which scored 3-1-2 placings for 19. Another point away is 2011 World Champion Transfusion (Guido Belgiorno-Nettis, on 20 from 1-5-3 placings.
Royal Sydney Yacht Squadron race officials took the option of moving the racing into the harbour because of the lumpy sea conditions on the preferred offshore course.

The south-east breeze in the harbour varied from 14-18 knots for the four-lap windward-leeward races, started in Chowder Bay with the windward marks in the southern end of Rose Bay, noted for its tricky wind shifts.

For the last race of the day, the regular Wednesday afternoon social sailing keelboat fleets and the 18ft skiffs warming up for a heat of the J.J.Giltinan international championship, were added distractions.

The international jury granted Struntje Light 5.2 redress points for an incident, which leaves her on 31.2 in fourth place on the scoreboard.

Plenty led from start to finish in race four, first of the day, by 1min 2sec from Transfusion. From a good start, leading the pin end bunch, Plenty took two short tacks to consolidate her lead over the fleet and then stretch out, with great upwind speed and smooth crew work.

In race five Flash Gordon 6, second around the first windward marks to Struntje Light, gained the lead on the second windward beat and went on to win from Struntje Light and Transfusion. Plenty recovered from a poor start improved from seventh at the first mark rounding to finish fifth.
Transfusion bounced off Steel Point in a pressure gust on the first leg of race six to take the lead going into Rose Bay and hold it comfortably around all marks to the finish to win from Flash Gordon with Plenty third, recovering from a dead-last start after being recalled as a premature starter.
Plenty's owner-skipper Alex Roepers reviewed the day: “In race four we really got off the line well, we had a lot of speed upwind, hit the shifts really well and we extended. In race five we had a poor start and didn't get up on the line very well. In race six, we had a really great start but were over by a hair and got called back. We went back quickly, got to the right side of the course and got a lot of boats back. It was the second day of the regatta and hats off to Flash Gordon and Transfusion and we are pretty happy about where we are.”
“Evan Jahn co-owner and skipper with his father Helmut Jahn of Flash Gordon, who steers the starts and upwind legs while his 76-year-old father steers downwind, said: “It's a tight regatta it's going to be very close right to the end.”
Guido Belgiorno-Nettis said: “We are always trying to do better but are happy with today's 3-2-1 score. “It has put us back in contention. We think we can give Plenty and Flash a run for their money.We are in good shape now. It can easily come down to last race.”
~Bob Ross