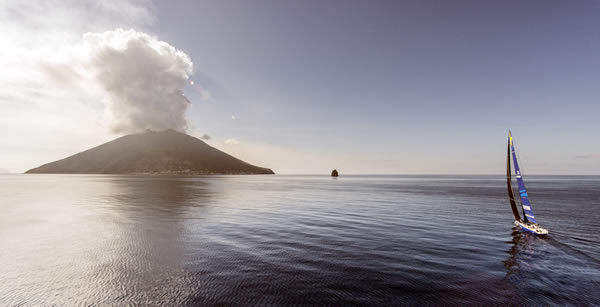 Offshore racing crews will get to experience one of the world’s most exceptional race courses when they take part in the Volcano Race 2016, off the west coast of Italy over 16-22 May.

Organised by the International Maxi Association (IMA) in conjunction with the Yacht Club Gaeta EVS, the annual Volcano Race will see competitors leaving Gaeta (80km northwest of Naples) and then sailing south across the Tyrrhenian Sea to the Aeolian Islands, off northeast Sicily. These islands include Stromboli and Vulcano, which are two of only three active volcanoes within mainland Europe. During night time roundings, crews get to experience Mother Nature’s own firework display.

The fleet then returns north to Gaeta to complete the 460 mile course, passing mainland Europe’s third active volcano – Mount Vesuvius – on the way.

Before and after the event, the fleet will be based in the heart of Gaeta, at the Base Nautica Flavio Gioia.

The program kicks off with a warm-up, practice race off Gaeta on Tuesday, 17th May, with the start of the Volcano Race itself on Wednesday 18th May. The first boats are due back into Gaeta on Saturday, 22nd May.

The Gianfranco Alberini Challenge Trophy, established in tribute to the late Secretary General of the International Maxi Association, who set up the Volcano Race, is awarded annually to the crew showing the best ‘sportsmanship’. Last year it went to Yacht Club Gaeta President, Vincenzo Addessi, skipper of the Mylius 60, Fra Diavolo.

Andrew McIrvine, Secretary General of the International Maxi Association, commented: “We are looking forward to the sixth edition of the Volcano Race, which will be the first offshore race for Maxis in the Mediterranean this season.

“The sensational course for the Volcano Race makes it a favourite among Maxi owners, so last September the IMA elected to include it as the second event in the brand new 'Mediterranean Maxi Offshore Challenge', which comprises the Mediterranean's four most famous offshore races.”

Registration for the 2016 Volcano Race officially closes on 1 April. There are discounts on entry fees for boats registering before 1 March.

The Notice of Race and Registration Form can be found on the International Maxi Association website and on that of the Yacht Club Gaeta.