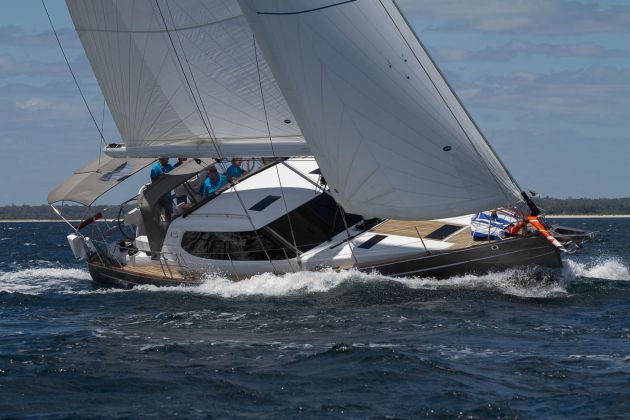 With only the final day’s passage race remaining, leaders in both divisions 1 and 2 have established a three point buffer over their nearest rival, suggesting that David Walling’s The Next Factor, helmed this week by Peter Ahern, will take out the big boat IRC gong and Laurie Flynne’s Dynamic should wrap up the Division 2 IRC contest over sister ship Mind’s Eye, despite a disqualification in one of today’s three races.

After Tueday’s marathon, when a promising early breeze faded to nothing, today’s 15 to 20 knot south easterly had everyone smiling when results were announced at the Port Geographe Marina.

The little Corsair 6000 Wide a Wake finally had the opportunity to demonstrate its capability and registered a solid first on handicap. The little trimaran also surprised many of the big cruiser racers in Division 3 with her downwind speed. Tony Carter’s First 40 Just Cruisin took out line honours. Second and third on handicap were Barry Brown’s Electric Tram and Albany’s Michael Cameron in Easy Tiger. Doug Lawler’s Twist and Shout hold the series lead by four points and would be unlucky to lose the overall title from here.

Craig Hansen’s magnificent Buizen52 Napea had all the crew on the windward rail for the first time in the regatta. The big boat powered to a line honours win and surprised the skipper when it also scored first place on handicap. Local yacht Catfish sailed by Doug Kelly leads the points table ahead of Ron Meyers’ Hornet’s Nest by only two points so the title is still up for grabs.

A third in today’s race maintains Leonie’s place on top of the Jib and Main fleet with a three point buffer over both French Kiss and Heaven Can Wait, so once again the series will be decided by tomorrow’s results.

Forecasts for the last day of the regatta suggest good breeze again, though not as strong as those on the course today.