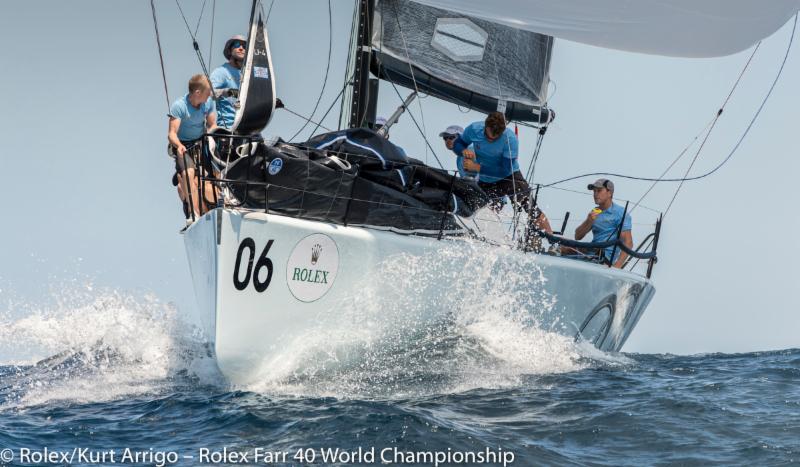 Plenty (Alex Roepers, USA) extended her points lead from one to four in the Rolex Farr 40 worlds today after three races in difficult wind and sea conditions on the offshore course, set north-east of the entrance to Sydney Harbour and conducted by Royal Sydney Yacht Squadron.

A light 10-12 knot breeze backed from south-southeast to east-southeast and held big differences in pressure. But the biggest problem for the fleet was the big, sloppy swell left over from the fresh southerlies of the previous two days, which made accurate steering and sail trim difficult, upwind and down.

Plenty, after 1-7-3 placings today, is on a total 29 points from nine races, followed by Flash Gordon (Helmut and Evan Jahn, USA), which had 4-5-5 placings today and Australian champion Transfusion (Guido Belgiorno-Nettis), 4-5-5 today, leaving them equal with Flash Gordon on 33 points.

Fourth on 38.2 points is Struntje light (Wolfgang Shaefer), which top-scored for the day, from 2-4-1 placings, to set aside the disappointment of a non-finish after an incident with a non-racing boat on the last race of the previous day, to still be in the running with the final two races of the 11-race series to be sailed tomorrow.

Plenty from a good start took the lead on the first beat of race seven, the first of the day, was passed by Flash Gordon which found better pressure on the second beat and regained the lead on the run to the finish with better-judged gybe angles and by working the waves well.

Flash completely misjudged her final gybe to the finishing line and dropped to fourth, behind Struntje light and Transfusion.

Boats more lowly placed on the scoreboard dominated race eight, finding better pressure to the east after the four points score leaders kept watch on each other sailing mid-course up the first beat.

Struntje light led around all marks to win race nine from Transfusion, with Plenty recovering from eighth at the first windward mark rounding to finish third.

Alex Roepers (Plenty): “In race two and race three, staying in pressure on the course was extremely important. Sometimes you had it and sometimes you didn't. In race two, we were sailing with our top contenders and boats behind tacked off into more pressure to the left. We had to bail out recover from 10th to seventh, which was not bad. In the final race we found a shift with pressure and came back from eighth to third on the second windward leg.”

Wolfgang Schaefer (Struntje Light): “Our boat speed was good although it was not easy to keep the speed up and down in the big waves.”

Helmut Jahn (Flash Gordon): “We are still in the running. Today was difficult not because of big shifts but pressure differences. You pick the left and suddenly you get pressure. In the first race we were well out in front and could have crossed the fleet at that point on the layline from the right when the pressure built on the left and five or six boats crossed us and we dropped to seventh. So the conditions were difficult, worse than when it blows 25.”

Guido Belgiorno-Nettis (Transfusion): “It was hard work but we managed to salvage a reasonable scoreline to keep us in touch and we are equal second with Flash. Hardest was the big swell, both upwind and downwind; trying to keep the boat powered up all the time. Plenty managed to sneak away so it's all on tomorrow and anything can happen.”