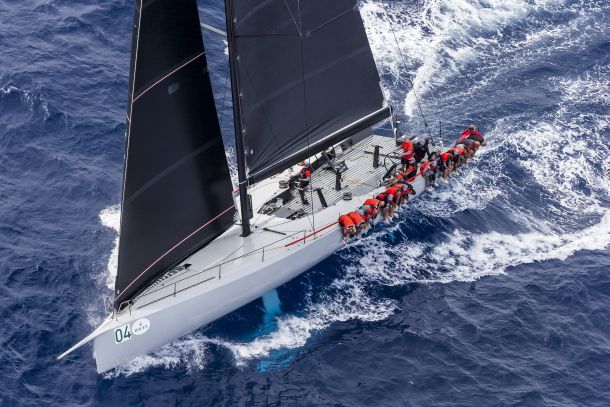 Indicative of how tight competition is between the 40 boats, lead changes again proliferated on day three of the Maxi Yacht Rolex Cup and Rolex Maxi 72 World Championship, organised by the Yacht Club Costa Smeralda and the International Maxi Association.

With a similar lumpy sea to yesterday, the northeast wind started at around 20 knots, but steadily dropped to sub-10 knots. The Maxi 72s and Wallys returned to racing two windward-leewards directly off Porto Cervo, while the remainder sailed a similar 38 nautical mile course to yesterday around Arcipelago di La Maddalena, only in the reverse, clockwise direction.

Florio, who earlier this year competed in the International Maxi Association’s Volcano Race, said: “Today we came second, but we are very pleased with the performance of the crew and of the boat. The conditions didn’t suit us, but we expect over the next days to regain first place.” On board Grande Orazio Pioneer Investments, Florio races mostly with friends and family, including his brother Francesco, and the odd professional such as Volvo Ocean Race sailor, Alberto Bolzan.

In the Rolex Maxi 72 World Championship, the big winner was German Dieter Schön’s MOMO, which claimed both today’s races. Moving her into the lead, she is just 1.5 points ahead of Hap Fauth's Bella Mente, in turn a quarter point ahead of Roberto Tomasini Grinover's Robertissima III.

Schön was satisfied with his team's performance on what is the Maxi 72 class’ latest boat: “We made some good starts and when you are coming out quick then you have a good chance to be first at the first mark.” However he found today’s conditions hard: “For me it was difficult to steer, because of the waves – it was super choppy.”

Schön relishes the closeness of the competition, where tiny errors are penalised heavily. In fact MOMO led today after winning the pin in both races. As tactician Marcus Weiser observed: “If you could get off the pin with good acceleration you had all the pace to go where you wanted to, because the boats behind were tacking on each other. You could just sail your own race and stretch away.”

“It wasn’t bad, today, but we had a few issues – the spinnaker released early and then we lost electrics on the mainsail,” advised Dubens.

Spectre is a special boat with ultra-low freeboard, a reverse ‘Dreadnought’ bow and canvas seats rather solid benches in her cockpit. She is quick too – yesterday hitting 19 knots.

“It is nice to see a St Tropez day sailer, coastal racing,” continued Dubens, competing in his first Maxi Yacht Rolex Cup. “The concept was that we have a house in France so we can take the family out for the day but also to do regattas.”

This seems to be the pecking order in the Wally class, maintains Alberto Palatchi, the Spanish owner of the Wally 94, Galma: “We were fifth today and are sixth out of 13 – so in the top half. We have been improving every day and our objective is to finish fifth. In front of us the two Centos defend their handicaps well and are the latest generation. Y3K is well sailed and J One is 20 years old but can still win any race.”

Like many owners, Palatchi, who runs the annual Menorca Maxi regatta (now into its second year), will be attending tonight’s International Maxi Association dinner at the Yacht Club Costa Smeralda. “I am delighted to be part of IMA,” said Palatchi. “I am the only Spanish maxi owner and I’m very pleased to be here. It is a privilege to be among all these experienced sailors.”

Contrary to the schedule, racing will continue tomorrow with the Race Committee having moved the layday on to Friday when the forecast indicates there will be no wind at all.