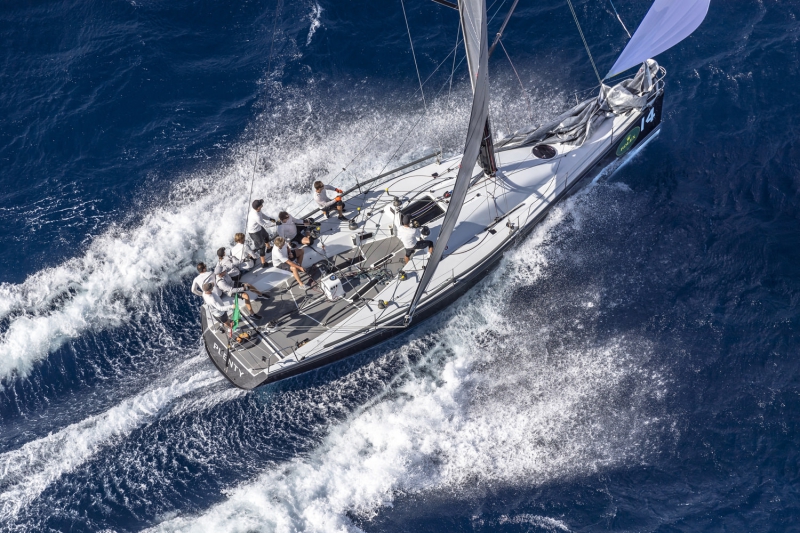 Porto Cervo: Being patient paid off at the end of the second day at the Rolex Farr 40 World Championship, organized by the Yacht Club Costa Smeralda with Title sponsor Rolex and the Farr 40 Class Association, but it was a long day of waiting, both on the part of the teams and on the part of the Race Committee, for the strong Mistral breezes to die down.

The Race Committee kept a close eye on the situation in the hopes of getting a race in. Finally at 5:00 PM, in the warm light of the late afternoon, the Farr 40 fleet headed out of port. The winds were at about 23 knots but built during the race making the competition a real thrill both for the teams participating and for the spectators watching the Farr 40s planing downwind at up to 20 knots.

The American team aboard Plenty (Roepers/Hutchinson), the defending world champions, were the day's pick to win, but all the teams, even the Corinthians, were out there to do their best.

Plenty and the Turkish team aboard Asterisk (Gencer/Rogers) got good starts at the centre, while Flash Gordon (Jahn/Reeser) and Enfant Terrible (Rossi/Vascotto) started well on the pin. The Turkish team got a penalty for crossing Enfant on port tack while Flash was in the lead at the top mark.

As often happens in conditions with gusts at up to 30 knots, trouble was in the making on the downwind leg.

The Australian team aboard Zen (Ketelbey/Chapman) broached and slipped back. Flash Gordon had problems with their spinnaker and Pazza Idea (Rossi/Ivaldi) took advantage. This team got a slow start, but sailed well.

Alex Roepers, owner/helmsman aboard Plenty: “It was a fantastic and spectacular day in the waters off the YCCS. We're very happy because the race went really well and it was also lots of fun, one of the most fun days I've ever had on a Farr 40.

“Conditions were tough, wind speed from 22 to 31 knots, boats speed at up to 17.5 knots. We sailed well upwind with a J four and downwind we were just ripping. Good gybes and good manoeuvres. The secret is a very good crew, good harmony and lots of experience on the boat. We have all sailed together in Sydney and it's just a pleasure.”

Racing should get underway tomorrow, Saturday June 15th, at 11:00 AM in light northerly breezes. The Race Committee will try to run up to four races a day in the final two days of racing to make up for the races abandoned due to conditions.