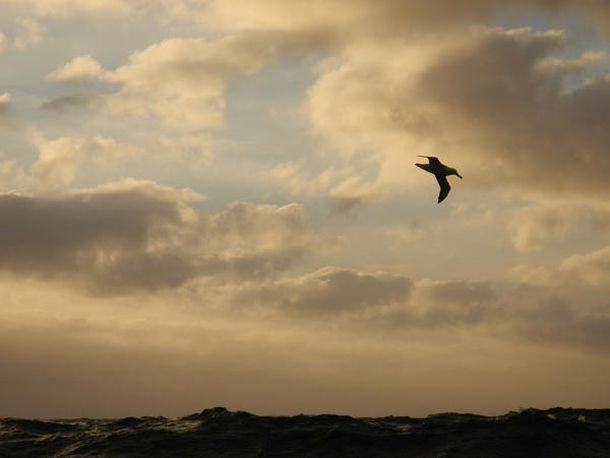 Four weeks after the Barcelona World Race started on a warm, sunny afternoon off the Catalan capital, just hours before 2014 became 2015, and the fleet is now well spread over very nearly 3000 miles of ocean. Bernard Stamm and Jean Le Cam on Cheminées Poujoulat are pushing on well in the relatively moderate conditions of the South Indian Ocean, teasing their margin out today beyond 200 miles once again, ahead of Neutrogena, Guillermo Altadill and José Munoz.

GAES Centros Auditivos, Anna Corbella and Gerard Marin, remain constant in third place, at 600 miles behind the leaders. Indeed the mixed duo have pulled back just under 10 miles this afternoon on the leaders.

Between the two leading IMOCA 60s, Cheminées Poujoulat and Neutrogena, the different strategic approaches remain immediately evident. Stamm and Le Cam maintain their very direct easterly course. Their line is now less than 100 miles north o f the course of Altadill and Munos, but the Spanish-Chilean duo are still locked into a sequence of regular gybes, bounced back north by the Antarctic Exclusion Zone for short 50 miles hitches, before turning east again on the making gybe. The Swiss-French leaders who have three solo round the world race podium finishes between, them have been quickest throughout today, making averages over 17kts in the W'ly 20-25kts breezes.

Munoz, partner to Altadill on Neutrogena, remains very much the 'quiet man' of the leading three duos. The 42-year old has been a professional sailor since the age of 18 and is now Chile's best known and most successful ocean racer. A past winner of the Class 40 Global Ocean Race, the two handed race with stopovers, Munoz has aspirations to launch a Chilean IMOCA 60 programme in the future. And while he has sailed tens of thousands of deep ocean miles, he is also a very accomplished inshore, short course round -the-buoys sailor, racing IMS and one design racers, lately including the Soto40.

He lost his long time sailing friend and Global Ocean Race co-skipper to a plane crash. Felipe Cubillos died in an accident near the archipelago of Juan Fernández in 2010.

Cubillos worked with the Desafío Levantemos Chile (Rebuild Chile Challenge) which he founded to promote the rebuilding of the areas affected by the tsunami which hit the country on February 27th 2010.

“It was a huge loss. We started off together in Algarrobo and I'd been sailing with Felipe for 11 years before teaming up with him for the Global Ocean Race,” said Munoz before the start in Barcelona.

Munoz was born in Algarrobo, Chile in April 1972. Something of a Chilean nautical paradise, it was in his hometown that he came of age as a sailor and that's where he continues to live with his wife and two daughters. He started off in a rather unconventional fashion, taking to the oceans at a very young age:

“I started off in the Algarrobo Yacht Club and at ten years old I was already offshore sailing with my father. At 18 I got into professional sailing in J-24s and shortly after I took on a few crossings of the Pacific Ocean”.

Call it one third of the race sailed. In real terms, on the water, up until last night 27th January, race tracking supppliers Geovoile tell us that leaders Cheminées Poujoulat had sailed 9079 miles and Neutrogena 8937 miles on the water. That should still equate to more than one third of the 23450 miles theoretical course distance. Short-handed and solo racers are known for taking one day at a time, one watch at a time. But keeping the view long term is also essential for motivation.

Passing Cape of Good Hope, albeit 575 miles south of it, was an important milestone for the fourth placed Renault Captur duo Jorg Riechers and Sébastien Audigane, but it is still to the medium and long term, some eight days down the line that the German co-skipper is looking. He predicts that GAES Centros Auditivos will run into lighter breezes in a high pressure ridge which might be their opportunity to pull back some bigger miles on Corbella and Marin. For sure he and his French co-skipper still have grand designs on third place.

We Are Water making miles and making a difference

Fastest boat on the water over the 24 hours up until this morning was the Garcia brothers on We Are Water. Bruno and Willy, like Southern Ocean rookie Riechers, have yet to experience the real ferocity of the Big South, but the brothers have been racing ahead of a front in 30-32kts of breeze – conditions 'like wet cold trade winds' according to Bruno today.

They have their small electrical problems which are not hindering their performance, but the Garcias have taken a few small miles back on Renault Captur. They have a growing level of global support and interest for their mission to publicise the work of Roca's We Are Water foundation. (http://www.wearewater.org/en/tracking-we-are-water to follow as they pass key projects). To date they have passed a water, sanitation and hygiene in schools project in the region of Tombali in Guinea-Bissau. This re quired €20,000 to improve drinking water, sanitation, and to deliver education on good hygiene practices for 10,000 children and 9,000 adults. And the second project they have passed the longitude of is in Zabazugu Northern Ghana. There a well building project is due to offer positive benefits to 3,000 people, building 10 wells.

“To be honest we have not yet had the conditions which are typical of the Southern Ocean. Up until now we have only been reaching winds which are quite strong, not too much rain and some clouds, but no front as yet. To be honest we are very excited to be here, it is the first time we have been here, we wanted to be down here at least once in our lives. So we are happy.”

Jorg Riechers (GER) Renault Captur: “We have nice weather, 20 knots of wind, not too cold, sunshine. It is perfect. It is less tough than I thought it would be. The waves are pretty high, we have had between 20 and 30kts of wind all the time, but it is not cold yet. Two days ago it was much colder so at the mome nt the Big South is in holiday mode, it is quite pleasant sailing right now. We are reaching with the reacher up, we are about 500 miles GAES Centros Auditivos but we hope in the next eight days we can close the gap a little bit. We think they will run more into the high pressure system than us. So I hope we can catch up a bit, and get back into the match for third place would be nice. At the moment it is quite pleasant.”

Sébastien Audigane (Renault Captur): “We have had three days with a lot of wind, it has died down a bit today, we took the opportunity to do some cleaning up and rest. The wind is expected to build and back later today.”

Is the exclusion zone more containing than ice gates?

“We feel it is because we have been running along the southerly wall for a while. In few days we will hit a big anticyclone which will stand in our way. If there were gates maybe it would have been simpler. Now it is what it is and we accepted that as a rule, it does not bother us too much, we will take stock after the race.”

The Cape of Good Hope will be special?

“We do not really think or talk about it but this is a special moment. One of the three important milestones is the tip of South Africa and getting down to the 40s. It means we are going into the more hostile regions and where there are not many people. For three days now we ahve been the 40s, the Albatross follow us and the seas are big.”