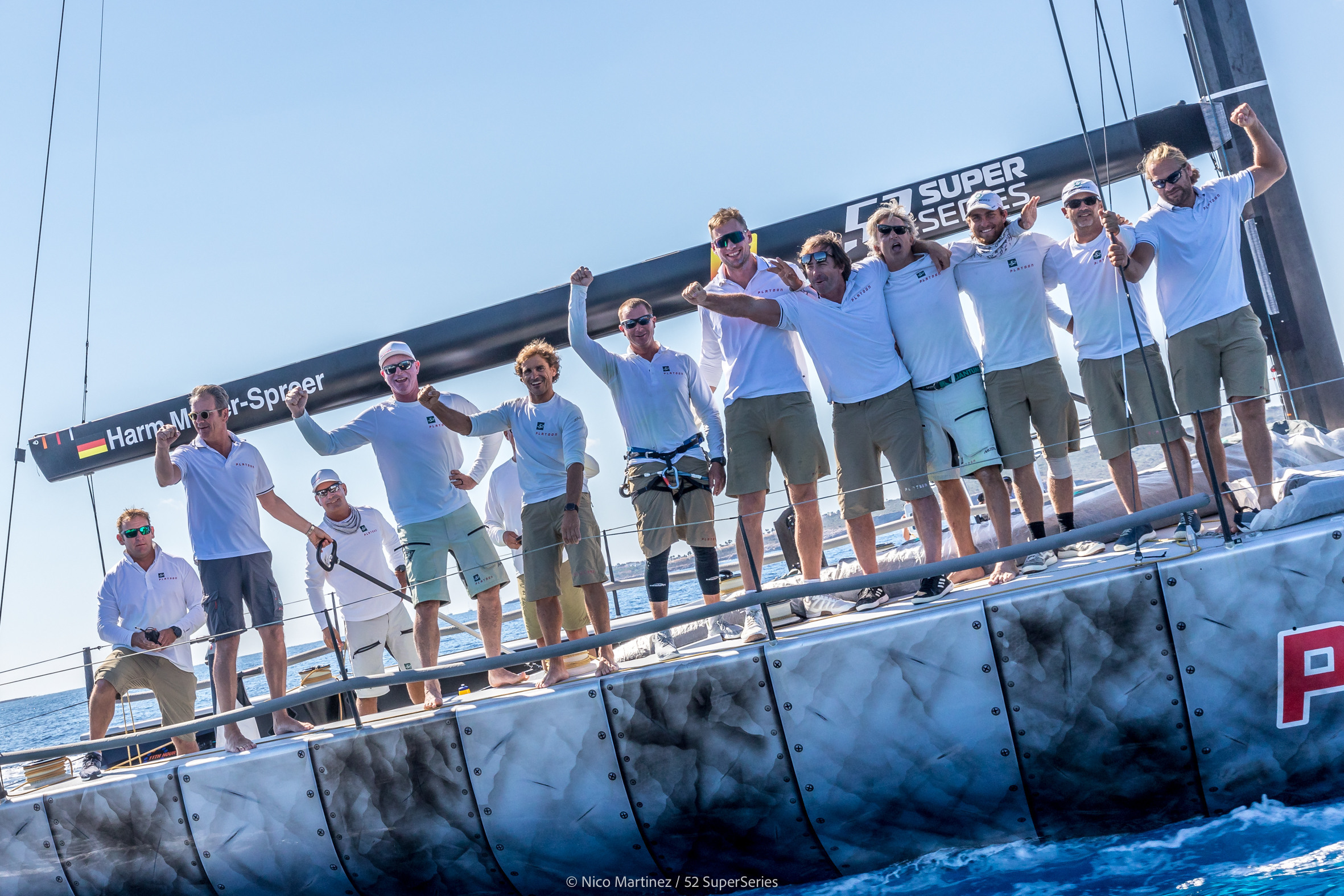 Platoon crew - we are the champions

Harm Müller Spreer’s can point to a consistent series as the reason his German flagged Platoon team won at the Menorca 52 Super Series Sailing week for the second time in a row.

The double world champions cut out the costly errors, such as the three Red Flag penalties, which ruined their possibilities of collecting the Mallorca title last month in Puerto Portals when the 52 Super Series opened.

With John Kostecki and Jordi Calafat combining on tactics and strategy for owner-driver Müller-Spreer, the Platoon team finished with a tally of 4,3,6,4,1, to win by a couple of points from Andy Soriano’s Alegre.

Owner driver Müller Spreer smiled as he said, “It is a bit strange to win here the second time in a row, but we had so many different conditions, especially the two days with a lot of wind and big waves, they were really tough conditions.

“The class is so close. At least five different boats could have won here. It is really, really hard when you make a small mistake. It is very demanding here; shifty and the wave patterns are difficult, especially when the winds are dropping and the waves are still there. It makes it hard to steer the boat fast over the whole race course.

“Right now, it is so close, but five boats are certainly in the frame for the overall title.“

Alegre opened the regatta with a trio of bullets, unprecedented in the event’s nine-year history, but on Day 3 they slipped. Although They were happy with second overall, as were Doug DeVos’s Quantum Racing and Vladmir Liubomirov’s Bronenosec with third and fourth. when the last two windless days meant no further racing was possible. But the trio would have loved the chance to complete more races.

Quantum Racing started badly with an 11th before going 4,4,2,2. Bronenosec, with Vasco Vascotto calling tactics, took the heaviest penalty, for a collision at the start of Race 2, the resulting 14 points dropping them fourth.

Platoon wins the Royal Cup, one of the class’s most prestigious trophies. Designed by the famed Bulgari, it was donated by King Harald of Norway, Pasquale Landolfi, Willi Illbruck and Yannis Costopoulos.

It was originally a challenge trophy for IMS50 racing, at that time the world’s premier level rating class. Past winners of the Royal Cup include Landolfi’s Brava Q8, as well as Peter de Ridder’s 50-footer Mean Machine.

As the 52 Super Series heads to Palma de Mallorca and the Rolex TP52 World Championship over the first week of November, the circuit standings could not be tighter. Platoon lead on tie break from Quantum Racing on 46 points while Alegre and Takashi Okura’s Sled are tied one point behind.

Circuit Standings after 2 of 3 regattas: