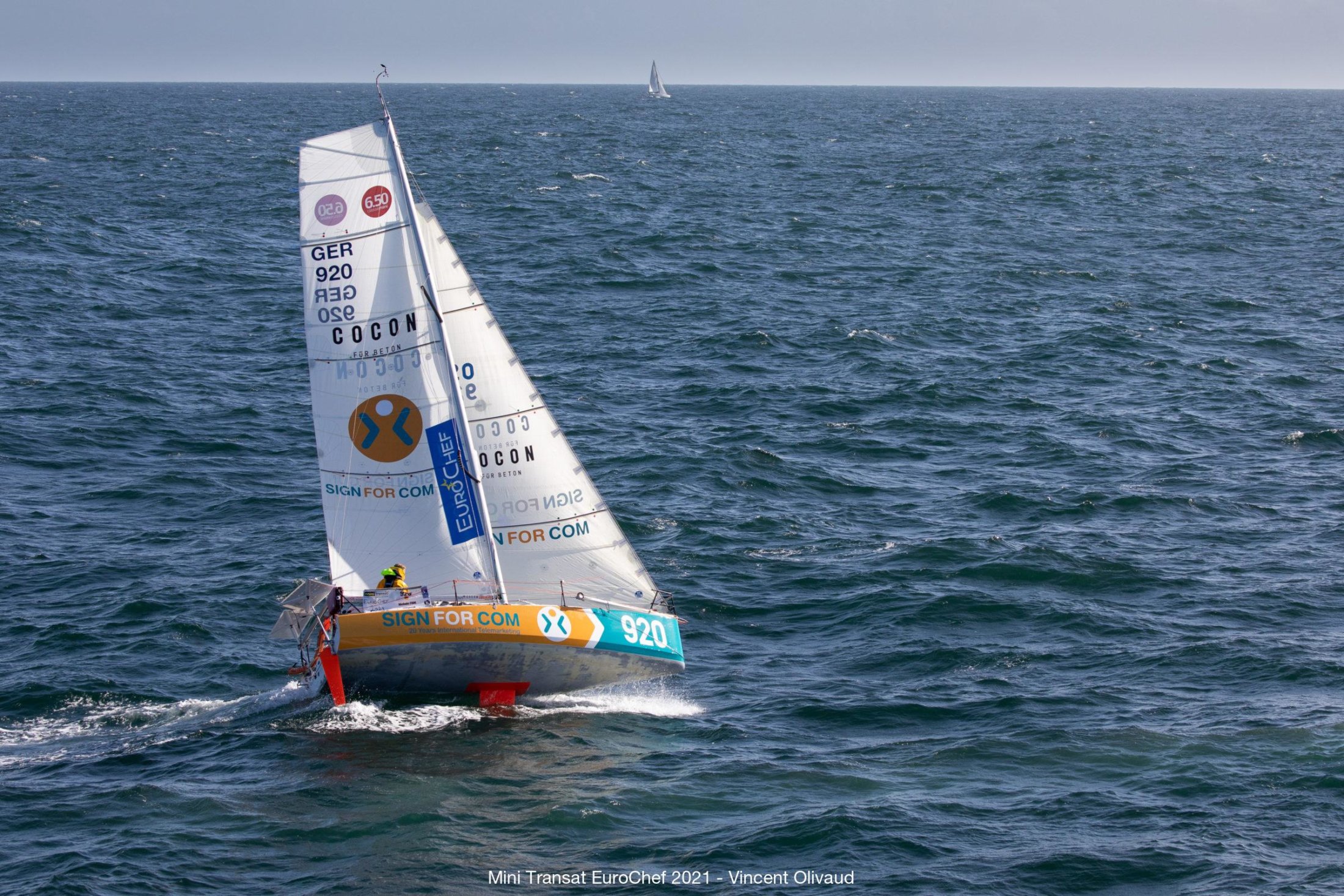 Alerted to the issuing of a severe weather warning affecting the areas of North Finisterre and South Finisterre, all but a few competitors in the 23rd Mini Transat EuroChef have taken the decision to take shelter – and for one, that decision may be beneficial.

This Saturday local time, besides the four leaders in the prototype category who are continuing to drop down towards the Canaries at high speed, only Briton Piers Copham (719 – Voiles des Anges), Frenchman Georges Kick (529 – Black Mamba) and German Melwin Fink (920 – SingForCom) have made the decision to stay out on the racetrack.

For Melwin Fink, the gamble might well pay off – in spectacular fashion. Although the youngster will have to deal with some bracing conditions tonight, once he comes out the other side, he may well have a lead of around 30 hours over the rest of the competitors in the production boat category in this first leg.

The conditions forecast for tonight in the Bay of Biscay and then offshore of Cape Finisterre are shaping up to be particularly meaty, with up to 50 knots in the gusts on heavy seas.

Most of the Mini Transat Eurochef fleet have decided to err on the side caution and seek shelter. In this way, some 82 skippers have headed into a series of different ports in Galicia and Portugal: Baiona, Muxía, Portosín, Camariñas, Viana do Castelo and La Coruña.

All are hoping to set sail again as soon as they can tomorrow morning once the cold front has rolled through. They won’t be able to hang around, as they will quickly get scooped up by a north-westerly of 20-25 knots, which is forecast to back round to the west and then south-west over the course of Monday.

At that point, the boats will have the wind on the nose, their skippers having to put in a series of tacks, which obviously won’t make their progress towards the Spanish archipelago very fast.

Meantime, the three Mini sailors who have decided to continue racing, may well be able to rack up some precious miles for the next stage of the race, especially Melwin Fink. The young German, aged just 19, could well pull off a veritable heist in terms of positioning on the leader board.

Having passed Cape Finisterre as 17th production boat at midday Friday local time, the skipper of SignForCom might well have amassed a lead of nearly 150 miles over his fellow rivals in 24 hours’ time.

However, to do so, Fink will have to succeed in preserving his gear as best he can as the front rolls over the top of him. The latter will be less violent over the race zone he’ll be navigating (between Vigo and Porto), whilst further north the wind is set to gust to 50 knots with 4.5-metre waves.

That said, it is still likely to be a boisterous night with gusts of up to 40 knots forecast between 17:00 hours this evening and 01:00 hours on Sunday morning, as the wind shifts around between the south-west and the north-west.

Further towards the front of the pack, at the latitude of Gibraltar, the top four prototypes in the fleet are continuing their descent downwind. Still propelled along by a fairly shifty north-easterly of around 15 knots, they are naturally focused on trimming and steering their steeds.

Leading the way, Pierre Le Roy (1019 – TeamWork) has seen his lead shrink considerably over the past 12 hours. He has gone from a cushion of over 45 miles ahead of his three closest rivals yesterday afternoon to a lead of just 8 miles over Tanguy Bouroullec’s (969 – Tollec MP/Pogo).

Positioned around 30 miles or so further east, the latter is coming back strongly and getting the very best out of his foiling Pogo. Behind him, Fabio Muzzolini (945 – Tartine sans Beurre) remains in ambush 37 miles back, but Irina Gracheva (800 – Path) has now dropped off the pace a little due to having an older, and above all, less powerful boat than those of her rivals.

They are likely to finish the leg from Monday morning local time in La Palma. The good news is that the trade winds will continue to accompany them pretty much all the way to the line.