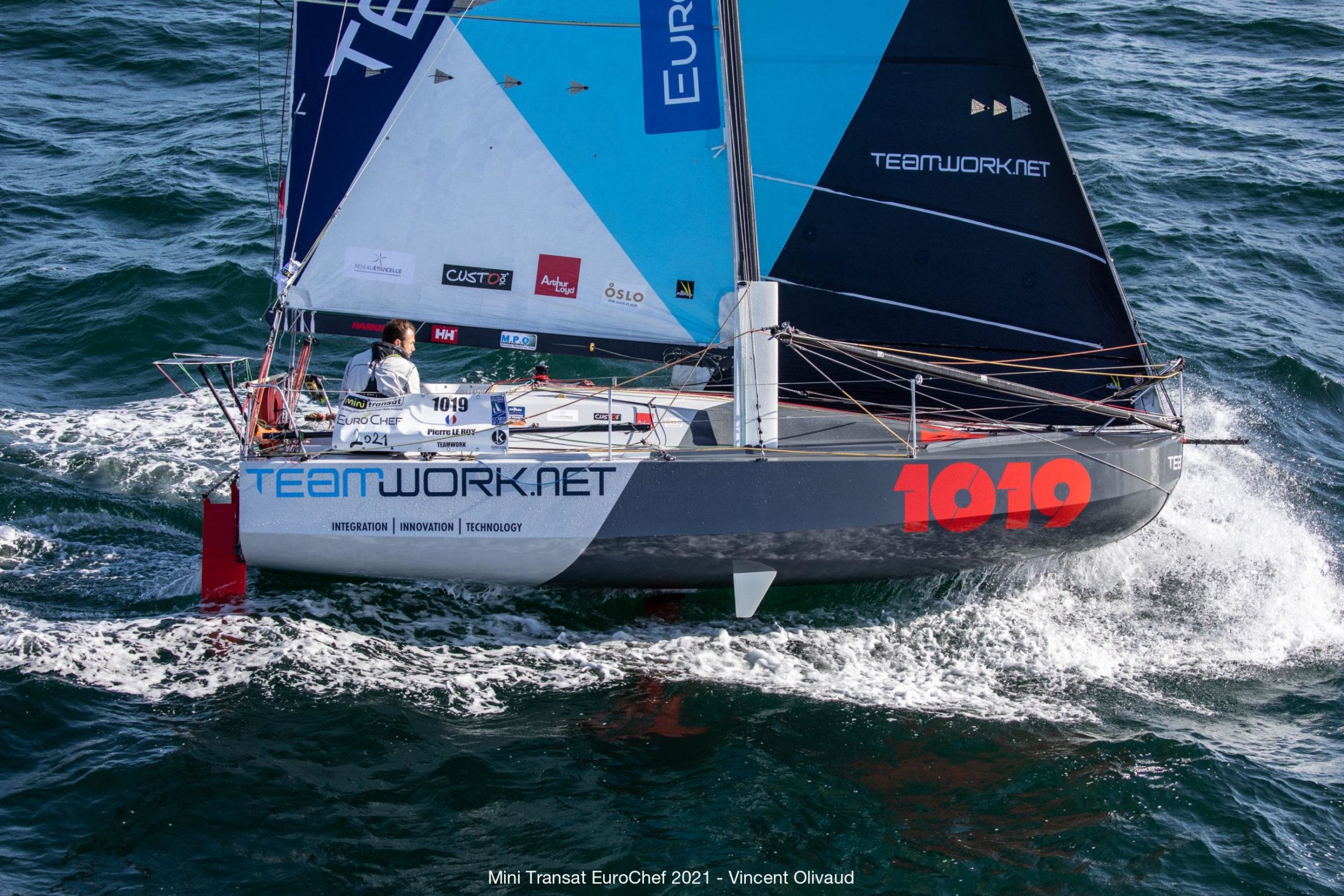 TeamWork is leading and out of harm's way - Vincent Olivaud pic

While the top four prototypes in the Mini Transat EuroChef are continuing to power along in the Portuguese trade wind offshore of Nazaré, and Cape Finisterre now in the wake of the first production boats, a large part of the fleet is pulling out all the stops to seek shelter in anticipation of a rather nasty low-pressure system.

The pressure system is looming over the Bay of Biscay and around the north-west tip of Iberia and a 30 knot south-westerly, gusting to 50, is forecast in these areas from tomorrow.

The ports of Baiona, Camariña and La Coruña seem to be the sites favoured by the competitors who have chosen to demonstrate good seamanship and put their race on hold temporarily.

Though the top four boats in the Mini Transat EuroChef are lapping up perfect conditions to rack up the miles at high speed offshore of Portugal, the reverse is true in the Bay of Biscay and offshore of Cape Finisterre, where conditions remain sluggish and shifty this Friday.

However, a drastic change of pace is announced from tomorrow, with the forecast turning especially violent on Saturday night through into Sunday due to a serious deterioration in the weather.

In fact, Dantean conditions are expected in these zones, with gusts of 50 knots on difficult seas. A severe weather warning has been signalled. Race Management has transmitted it to all the competitors, together with the advice to demonstrate good seamanship and consider seeking shelter.

Since receiving the message, a large number of competitors have seen reason and opted to put their race to one side to guarantee their safety and that of their boat. This is evidenced by the numerous boats courses which are gradually converging towards land.

The ports of Baiona, Camariña and La Coruña seem to be the destinations of choice for the sailors who are at risk of being the most exposed to these difficult conditions. The skippers most impacted by the situation are likely to be the latecomers, but things look complicated across the board for all who are still located to the north of the latitude of Porto by tomorrow evening.

Though escape is an option being taken by a great many skippers, fortunately it is not a necessity for the whole fleet. Indeed, the lead boats in the production boat category look set to escape the worst of the wind. For the time being, offshore of Cape Finisterre, they’ll gradually hook onto more consistent conditions, having spent 30 hours battling to make headway in light, erratic airs.

With regards to the rankings, the past 24 hours have seen Gaël Ledoux sail an absolute blinder. The skipper of Haltoflame-Ilots.site, positioned in 13th place some 14.6 miles shy of the leader yesterday afternoon, took control of the fleet at midday thanks to a daring trajectory closer inshore.

The sailor from Saint Malo is currently 3.6 miles ahead of Basile Bourgnon (975 – Edenred) and a small group of nine sailors led by Julie Simon (963 – Dynamips) around 5 miles back.

Among the prototypes, the small band of four mentioned above, comprising Tanguy Bouroullec (969 – Tollec MP/Pogo), Fabio Muzzolini (945 – Tartine sans Beurre), Irina Gracheva (800 – Path) and, most notably, Pierre Le Roy (1019 – TeamWork) – who is really flying and today boasts a lead of over 45 miles in front of his closest rival -, has clearly got a taste for speed.

These escapees are continuing to lengthen their stride, propelled along by the Portuguese trade wind. This trade wind is not very strong and relatively fluky, but it’s been enabling them to make headway at an average speed of between 8 and 11 knots over the past 24 hours. Their arrival in Santa-Cruz de La Palma is still expected late Sunday, or in the early hours of Monday, at least two days ahead of their pursuers.

Other news to note from today? Firstly, the successful tow of Franck Lauvray’s boat completed by the trimaran belonging to Adrien Hardy, a sailor and rescuer of boats in distress.

The prototype Alice, which suffered a dismasting on Tuesday night through into Wednesday, made the port of Lorient at around 01:00 hours local time last night, which means the skipper and boat have been made completely safe before the storm hits this weekend.

Furthermore, Lilian Geolle (616 – Aora) has managed to repair her mast wand. However, the situation is slightly more annoying for Camille Bertel (900 – Cap Ingelec), who hasn’t been able to repair the electronics and is continuing without an autopilot. She’s sailing alongside Pierre Legendre (994 – AKKA), who is helping keep her spirits up and providing a source of motivation.