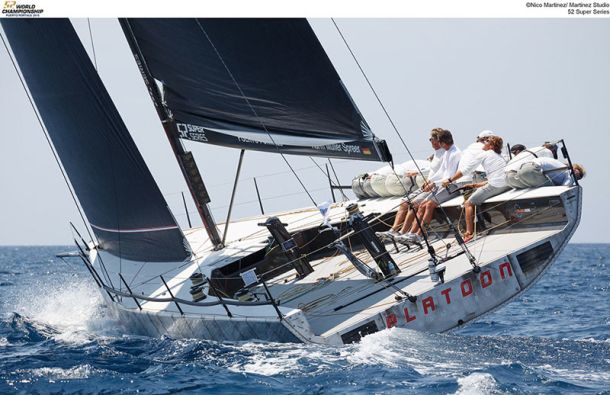 Harm Müller-Spreer’s German flagged Platoon team sit on top of the leaderboard after the first day of racing on the Bay of Palma for the TP52 World Championship Porto Portals. A gun to gun win in the opening race of the five days regatta, the first race win so far for the Platoon, was paired with a solid fifth in the second contest to leave them just one point up on the second placed Sled.

Takashi Okura’s Sled crew matched sixth to their victory in Race 2, their third win of the season, to sit two points clear of a trio of boats – Azzurra, Alegre and Rán Racing which all aggregated nine points today.

The opening day of the world championship sees the fleet at its highest level yet for the 52 SUPER SERIES. The return of Phoenix to the fleet arithmetically represents one more boat on the water, but from the outset they show themselves again to be a tough, talented top level team.

The mid fleet battles are intensely tough. There are no easy passes, no automatic right of recovery and it is very, very easy to end up right back in the cheap seats when the closing titles roll and the finishing guns sound.

And, with 12 boats racing, a double digits score is heavy ballast to go forwards with. World Champions Quantum Racing and Porto Cervo winners Azzurra both had rollercoaster days – Azzurra marginally better with a 2,7 but Quantum Racing’s 3,11 opening salvo is not the start to their title defence they wanted. And there are other high quality teams feeling the pain of a double dip day.

A win is important to Müller-Spreer. But, as is often the case on this race arena it was easy won after they gained the prime spot, at speed on the gun on the pin buoy end of the line. Their game plan was executed precisely and from there it was plain sailing, extending to win comfortably ahead of Azzurra which was second to the left, second at the top mark, and second at the finish. Credit to Quantum Racing and Phoenix which both gained big time on the second beat, working left to take four or five boats. Eduardo de Souza Ramos’ crew lost third to Quantum down the final run, the world champions just slightly quicker running in the 6 to 8 kts of light sea breeze and boiling sunshine.

In fact Müller-Spreer and tactician Marcus Wieser were both prouder of their second race fifth.
“We sailed better then. The first race was easy once we had the pin and the left.” Wieser said conclusively. Platoon were the first of a cluster of boats to be closed out when vying for the pin end start and had to gybe away. That left them close to last, taking sterns up the first beat. But they gained on each leg to cross fifth, a result which ensures they lead the regatta.

He is enjoying working with French ace Seb Col – a winner on Bastille Day – as strategist:

“For me working with Seb Col as strategist it works very well because he is very analytic and I am much more about what I see and feel. The combination is good. But Porto Cervo was a tough week for Seb. I have known Harm for many years, I know how he thinks and I can look after him, you have to control him. He is a great helm and such a nice guy but he has his emotions and I have to manage that and expectations. But expectations are elevated now and so it is not easy. The standard is so high, there are some professionals driving the boats too and you can’t just come into the circuit and think you will be a top, top three boat. He did not sail for the last four or five years.”