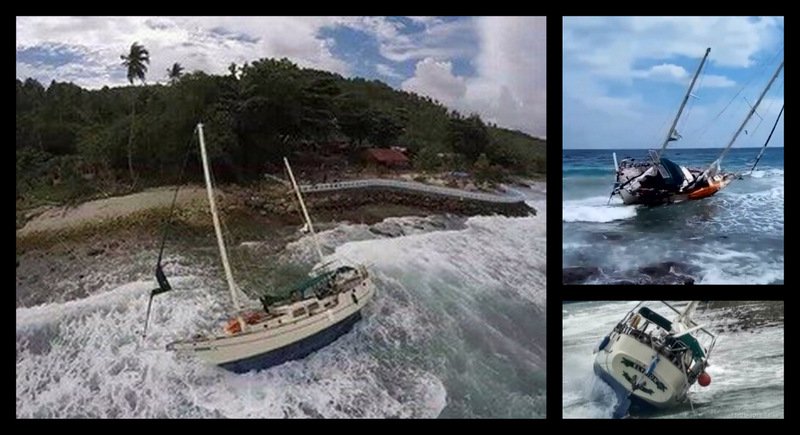 The skipper was forced to abandon the yacht 'Elysion' while en route from Phuket to Langkawi. Images: TMBA / Facebook

PHUKET: The skipper sailing a yacht from Phuket to Langkawi, Malaysia, that washed ashore unmanned in Sabang, Indonesia, has been safely rescued by a passing cargo vessel off Sumatra.

“Anyone missing a yacht?” said the original Facebook post, which noted that a small Thai flag was tied to the yacht’s the mast. Any persons with information about the yacht were urged to contact “iis dodent (Iskander)” via email to kutidhieng@yahoo.com.

A video of the yacht being toppled by waves onto the beach marked that the yacht washed ahore – alone and unmanned – on Saturday (Jan 13). (See video here.)

“I sailed Elysion, a Belgian-registered yacht, from Phuket (Thailand) to Langkawi (Malaysia) but had to abandon the vessel about 40 nautical miles west of Koh Lipe on Jan 1,” Mr Isacker reported.

The skipper was forced to abandon ship due to several failures, notably a broken boom, engine failure, a broken backstay, and more, he noted

“I was safely rescued by a passing cargo ship,” he added.

The Phuket News has yet to confirm any efforts underway to rescue the yacht, which has been pushed onto the beach at the small island.