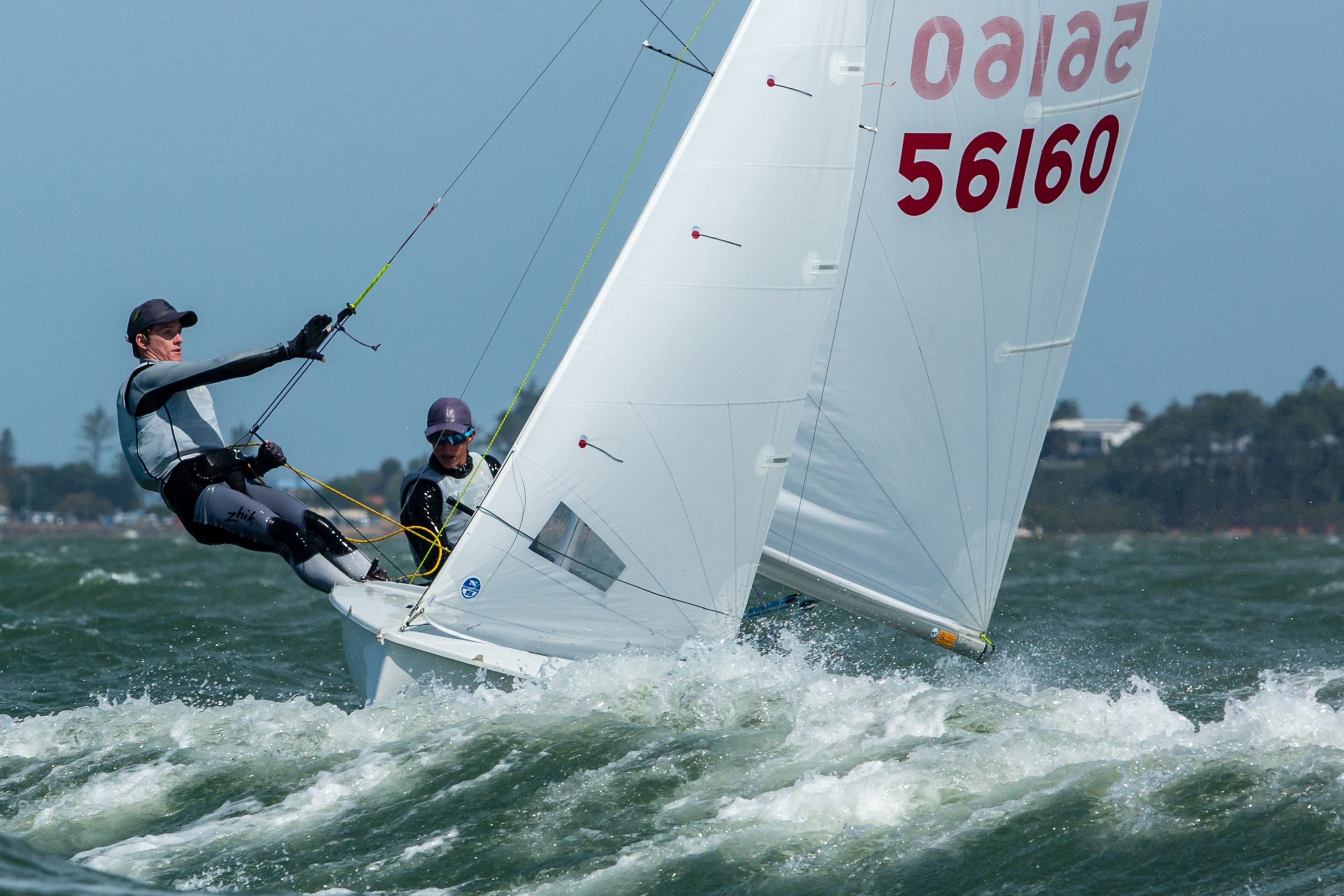 The Laser Radial class was hotly contested with Tom Needham sneaking home by two points from Sam King in the boys’ division and Paige Caldecoat winning by four points over Maddie O’Shea in the girls’ division.

Paige said she felt “a massive weight” had been lifted off her shoulders. “I was one point in front of Maddie, so it was a bit nerve-wracking knowing that I had to stay in front. But I managed to pull it off and couldn’t be happier,” she said.

Tom said he was “super happy” that the hard work had paid off. “I really enjoyed the race today. Whilst it was super-shifty and the wind was going all over the shop, the tension was actually was pretty good fun.”

Otto Henry and Rome Featherstone made it back-to-back national titles in the 420s. After winning at the Youth Worlds in China last year, the boys said they were keen to keep learning and improving.

“I was so focused last year on doing well at the Youth Worlds I didn’t really think about anything happening this year at all,” Rome said. “I barely even knew we were going to do this event.”

Otto said: “I’m kind of just relieved to get the spot again. Usually these small events with not many boats can be a bit tricky.”

Melbourne twins, Matilda and Lily Richardson took out the girls’ 420 title and said their hard work at training was the key.

“We just had to manage mainly the other girls’ boats to try and stay in front, which we managed to do,” Matilda said. “We’ve done a lot of training with a really good coach, Adrian Finglas. He’s helped us a lot. He’s great.”

Lily said: “We’d like to thank our parents for paying for everything and always being there.”

The 29er class was won by Henry Larkings and Miles Davey, who pipped 29er World Championship runners up, Max Paul and Lachy Brewer.

“We sailed pretty well,” Henry said. “We had clear starts all the time and it was perfect regatta sailing, really.”

Miles said it had been nine weeks since he’d been home. He said he looked forward to sleeping and eating in more familiar territory, as well as seeing friends.

Alice said final day conditions were tricky, with gusts, lulls and unusual winds from the south.

Dervla said: “It’s our first regatta together. We’re really happy to come out on top. It’s been really tough, the conditions, obviously, have been really challenging. But overall it’s been an awesome regatta and a great learning experience as well.”

Will Cooley and Evie Haseldine backed up their Nacra Class Nationals win with first place at the Youth Championships.

“Today was a long day,” Will said. “We just started it like a normal day and it worked out in the end.”

Evie said “getting as much rest as possible and going out there thinking you’re always strong” was the secret to their success.

“I think everyone’s really excited,” she added. “I’ve been sailing for ages and not gotten too far. Then I jumped into the Nacras and really worked hard. It’s good that it’s paid off.”

“I came back from China with a pretty serious infection,” Hailey said. “My immune system has suffered from it and I’ve just been struggling to eat for the past four days. So my strength has really been down. I got through it though.”

Kiwis Max van der Zalm and Veerle ten Have dominated in the Bic Tecno PLUS fleet with Max winning the Oceania Championship and Veerle the first female. The pair was also competing for Bic Techno PLUS Youth Olympic Games selection which will be finalised later in the year.

“I really enjoyed racing at the Youth Champs and I’m proud to have won both the Nationals and Youths,” Michael said. “Now I’m just looking to prepare for the Worlds and transitioning into the Radials.

“I would like to thank the race committee for setting up racing in a variety of conditions, which provided some really close races and a really great experience.”

Sylvie Stannage was the first female in the 4.7s to top off a huge summer sailing schedule.

“It was my third time at Royal Queensland including nationals,” Sylvie said. “I really liked the conditions, really fun really competitive fleet, such an amazing regatta, best one so far to top off the season.”

The 2019 Australian Youth Championships will be held at the Royal Yacht Club of Tasmania from January 10-14.