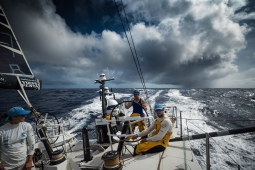 Team Sun Hung Kai/Scallywag skipper Dave Witt says the next 24 hours are the most vital of Leg 4 as they close in on an historic victory in their home town of Hong Kong.

Witt’s crew were sitting almost 100 nautical miles in front of their closest rivals Vestas 11th Hour Racing on Wednesday with just 840 miles to the finish line.

Despite the healthy buffer, Hong Kong is still 36 hours away, and Scallywag’s experienced sailors know better than to start celebrating just yet. To get to the finish they must first thread their way in between Taiwan and the Philippines, some 400 miles ahead. There are some patches of light wind in the area that need to be avoided.

According to Witt, the 24 hours leading up to this point will decide whether they can hang on to the top spot all the way home.

“For me the biggest concern is from here to the top of the Philippines,” he said. “Once we get around the corner of the Philippines to Hong Kong it’s pretty easy, I don’t think we can get passed there. The most danger lies between here and there so the next 24 hours are the most important.

“If we can get through the next three scheds without a loss there won’t be enough runway for anyone to catch us. We’re going to push really hard for the next 24 hours, and hopefully ‘sign the deal’.

“Basically the only way we are going to lose it is if we park up and stop, and I’ll make sure we won’t do that.”

A moment of panic set in when Scallywag hit a patch of light airs, halting progress. But thankfully for them the breeze that was forecast to fill in ahead of them materialised, and by 1300 UTC they were back up to speed.

“I don’t think anyone really understands the magnitude of this if we manage to pull it off,” Witt added. “There are so many firsts: first Hong Kong team ever, first time to Hong Kong… hopefully we will have plenty of time in Hong Kong over beers to let it sink in – but we have to get there first.”

Second-placed Vestas 11th Hour Racing were seemingly sitting pretty thanks to a 70-mile gap between them and team AkzoNobel in third on the leaderboard today.

However Dongfeng Race Team had been in third place some 50 miles behind Vestas before opting to go in to stealth mode, hiding their position from the fleet for 24 hours.

Charles Caudrelier’s crew will reappear on the tracker at 1900 UTC – and only then will anyone know what strategy they’ve been employing and whether they’ve closed the gap at all.

Sixty miles behind AkzoNobel were overall race leaders MAPFRE, with Team Brunel in fifth and Turn the Tide on Plastic in sixth.

Brunel skipper Bouwe Bekking, the most experienced Volvo Ocean Race sailor in the fleet, admitted his team have struggled for speed.

“Everybody is giving a 100 per cent, there is no doubt about that, but at the moment that’s just not enough,” he said. “We’ve made a mistake twice, once at the beginning of the leg and once in the Doldrums.

“With lower wind speeds and when we’re sailing closer angles to the wind we do alright, but when it’s like this, with more wind and coming more from the back, we barely manage to keep up with the rest of the fleet. It’s frustrating, but the only thing we can do on board is remain positive and trim and steer the boat as well as possible.”

The stopover, which is situated on Hong Kong's Kai Tak Runway Park, marks the first time that the boats have visited the region – and with local team Sun Hung Kai/Scallywag currently leading the Leg 4 fleet, the excitement is tangible

Following the ribbon-cutting, the guests were given a tour of the Race Village. The facility was already full of local school kids enjoying the interactive and immersive activities and structures. Over 12,500 local students will visit the Race Village during the festival period as part of the Schools Programme.

The latest ETA for the leading boat – SHK/Scallywag – is early afternoon on Friday, UTC (Friday night in Hong Kong).