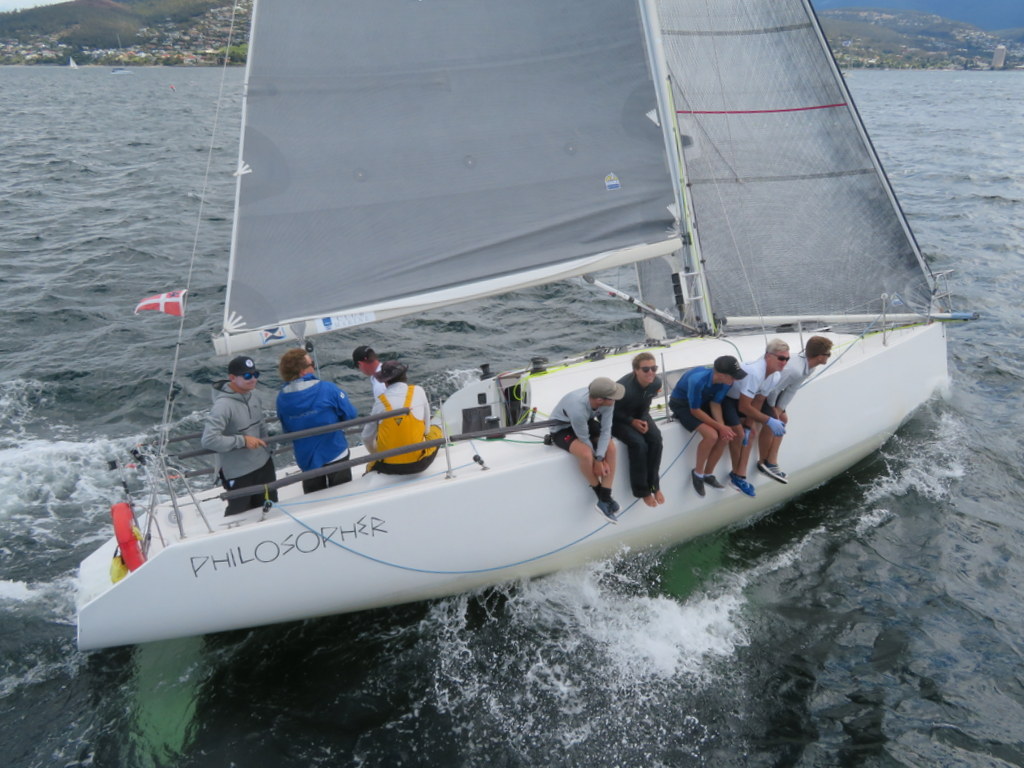 Philosopher powers to windward in the King of the Derwent. Photo Michelle Denney.

For 40 years, Hobartians have enjoyed one of the great sailing spectacles on the River Derwent – the King of the Derwent.

The Derwent Sailing Squadron introduced the KOD (as it known among yachties) to give locals an opportunity to test their skills against visiting ocean racing boats in the Sydney Hobart, the Melbourne to Hobart and for the past decade, the Launceston to Hobart.

The KOD has seen some exhilarating sailing ‘around the cans’ (buoys) on the river,  with line honours sometimes going to supermaxis from the Sydney Hobart.  There have also been collisions and dramatic spinnaker broaches.

Yesterday’s 40th  Derwent Boat Sales King of the Derwent yacht race was no exception:  a three-way duel for line honours in the 32 boat fleet,  some rollicking downwind spinnaker runs and broaches as the nor’wester gusted to 25 knots, and a brilliant, second successive King of the Derwent victory by former Australian yachting champion Philosopher. Fortunately, no collisions!

Philosopher is crewed by a real youth crew,  ex-dinghy sailors with an average age of 25 – except for owner/skipper Shaun Tiedemann the self-styled PBO (poor bloody owner).

But only after a hard-fought duel with local harbour racer X&Y (Toby Richardson) and Tilt (Peter Cretan) whose crew managed to repair the torn mainsail which forced their retirement from the Launceston to Hobart.

However, honours on the day certainly went to Philosopher, a Sydney 36cr which Shaun Tiedemann bought 18 months ago from former Sydney 18-footer champion Peter Sorenson.

The boat was then named The Philosopher’s Club and won an Australian IRC championship at Hamilton Island.

Tiedemann hopes to repeat that victory later this month when he sails Philosopher to Melbourne for the Australian Yachting Championships on Port Phillip.

Philosopher’s race helmsman is Shaun Tiedemann’s son Sam with the young crew largely made up of former International Cadet and Laser sailors, with noted Sydney tactician David Chapman again joining the crew for the King of the Derwent.

“We got a brilliant start, excelled sailing windward and were second around the top mark,” Shaun Tiedemann said after the race. “From there on we protected our position and won the KOD by a convincing margin.

Many of crew, including Chapman and Elliot Noye, today will be sailing in the SB20 world championship regatta starting on the Derwent.