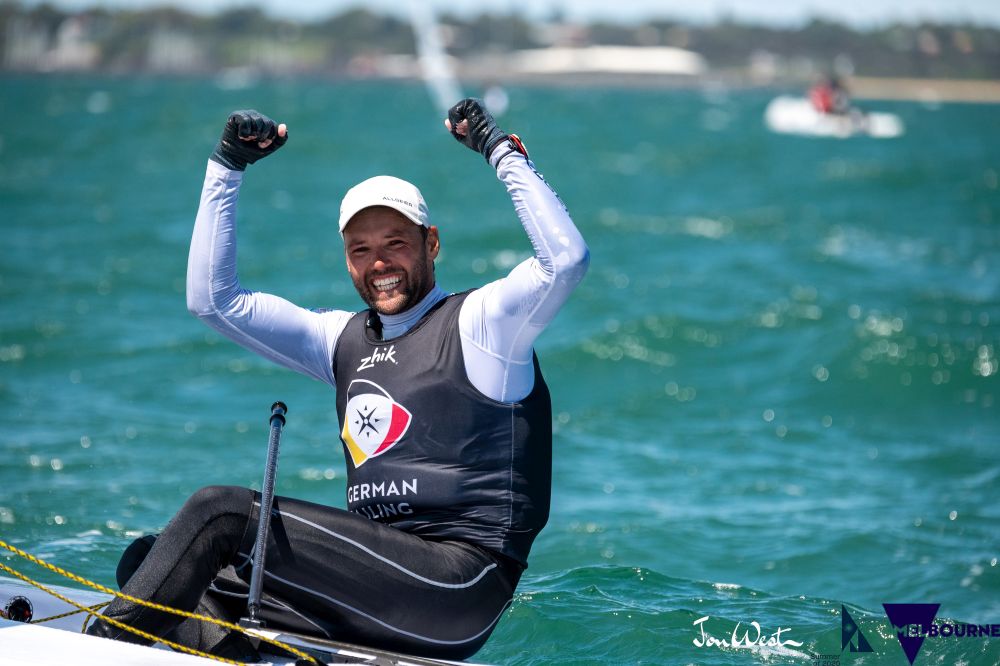 Buhl recorded four straight wins during qualifying and finished with just one double-figure score – a 10th in the penultimate race, which he was able to discard.

After being showered with champagne by his supporters on the beach, Buhl said it was hard to describe the winning feeling. “The week just happened,” he said. “When I got the two firsts on the second day, that gave me good momentum, but I knew anything could happen up until the second race today (when he knew he was unable to be beaten). I had good first beats, good downwind speed. It all came together for me this week.

“I’ve come close to a world championship a few times before. It’s so incredibly hard to make it happen. I think the Laser is the hardest class to win a World Championship. I’m just so happy!”

Matt Wearn (AUS) also put together a single-figure card to take the silver. Wearn didn’t win a race, but had five second places and dropped an 11 from qualifying.

“Obviously I would have liked to have won,” he said. “But I’ve still got a fair bit to work on so I’m happy to take second in a World Championship. This level definitely tests the form and I’ve been working on a few things all week. I’m still making silly mistakes here and there so I’ve got to iron those out and move one step up the podium (in Tokyo).”

Jean-Baptiste Bernaz challenged Buhl during the qualifying stage of the regatta, but a Black Flag in race 7 and a 32nd place in race 10 ruined his chances. To the Frenchman’s credit, he bounced back to win the next race following both those high scores. With six race wins in total from the 12 race series, he finished fourth, just two points behind Stipanovic.

Defending champion Tom Burton (AUS) has been racing in the Moth and other classes after learning he had not been selected for Tokyo 2020 and his lack of time in the Laser showed. Burton finished in 15th place after being U-flagged in the final race.

The 2014 and 2015 World Champion, Nick Thompson (GBR) also had a regatta he would prefer to forget, finishing in 19th place and probably missing his country’s nomination for Tokyo after compatriot Elliot Hanson finished 5th. However, Team GB does not have specific selection criteria, so both sailors will have to wait for the announcement.

It was a similar story for New Zealand, where Rio bronze medallist, Sam Meech, was the leading sailor in 8th but must wait to hear if he has done enough to get on the plane to Tokyo.

This championship did decide the fate of Hungarian brothers Benjamin and Jonatan Vadnai, however. By finishing in 23rd, Ben will attend his second Olympics and his younger brother must wait another four years for his chance.

This was probably the last World Championship for Laser legend, Robert Scheidt, who qualified for Gold Fleet and finished in 42nd place after becoming ill and failing to sail on the final day. The 47-year-old, who won gold in the Laser at Atlanta 1996 and Athens 2004 and silver behind Sir Ben Ainslie in 2000, showed he can still compete with men half his age.

The championship was raced in a wide variety of conditions, with winds from all points of the compass. However, the best sailors seemed unfazed, even when three races were held in cold and miserable weather yesterday.

There was considerable praise for the race management team and the host, Sandringham Yacht Club, who produced a well-organised regatta which included fast launch and retrieval of the 124 boats, a chef-cooked post-race snack for all competitors and various environmental initiatives such as a supply of chilled potable water to refill the sailors’ bottles.

The International Laser Class Association is expected to announce the venue for the 2021 World Championships later this year.