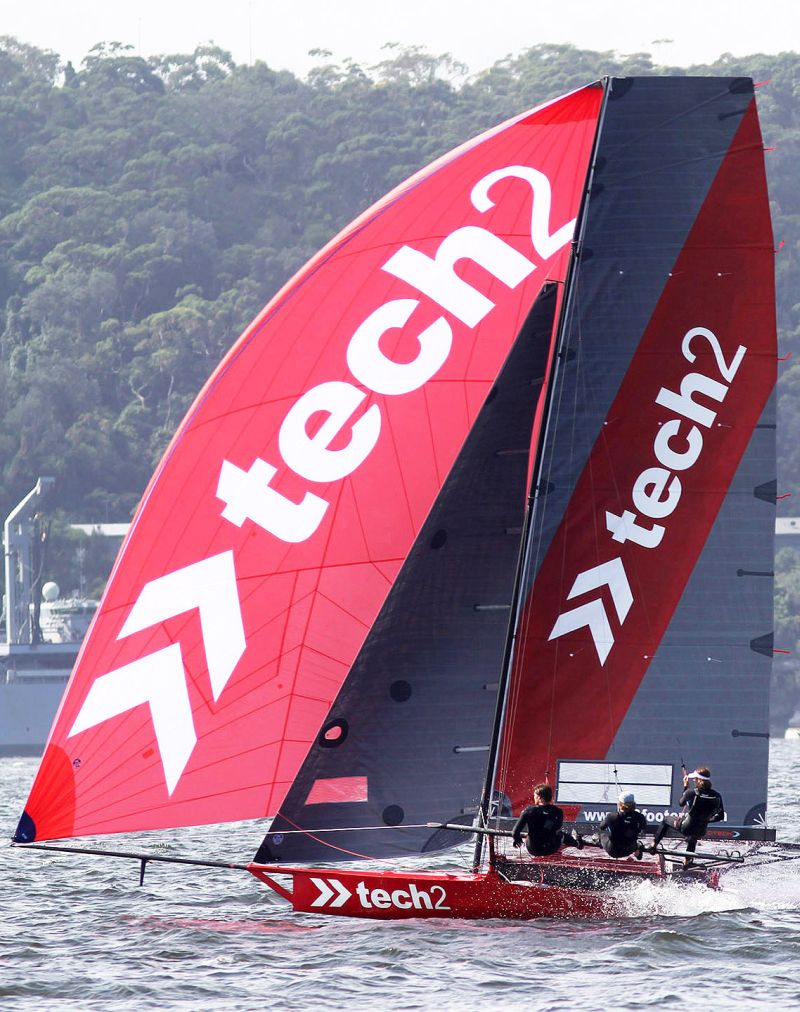 17/02/2020
Two spectacular wins by Jack Macartney, Charlie Wyatt and Trent Barnabas on Tech2 in Races 6 and 7 of the Australian 18ft Skiff Championship on Sydney Harbour today has given the team a nine points lead in the series with just two more races to be contested.
The Tech2 team had to come from behind in both races but showed outstanding crew work over the entire day and thoroughly deserved their victories and lead in the championship.
Pointscores to date have Tech2 on 16 points, followed by Finport Finance on 25, The Oak Double Bay-4 Pines on 34, Shaw & Partners Financial Services on 35, Noakesailing 37, and Appliancesonline.com.au on 41.
A steady SE wind provided good racing conditions on the harbour and spectators weren't disappointed with the action and spectacular capsizes.
In Race 6, the first of the day's two races, Tech2 scored a 44s victory over a fast finishing Noakesailing (Sean Langman, Ed Powys, Nathan Edwards), with just a further 10s to Shaw & Partners Financial Services (Michael Coxon, James Dorron, Tim Westwood) which also finished strongly after being further back in the fleet in the early stages of the race.
The Marcus Ashley-Jones R Marine Pittwater team took an early lead and sailed well to lead the fleet to the halfway point before Tech2's speed grabbed the lead.  R Marine Pittwater was still in second place at the final windward mark but couldn't hold off the Noakesailing and Shaw & Partners final downwind bursts and had to settle for a solid fourth place.
Smeg (Micah Lane) was near the lead throughout the race and finished fifth, ahead of another consistent performer, Appliancesonline.com.au (Brett Van Munster).
Finport Finance (Keagan York) went into the day as championship leader but a series of mishaps over the day's racing saw the team lose the lead with placings of 10th and 4th in the two races.
In the latter race, the John Winning Jr. led Winning Group grabbed the early lead and dominated the race to the final windward mark where the team still held a 35s lead over Tech2 and a comfortable victory seemed certain before they capsized after a collision with another competitor.
Tech2 had worked her way back into second place after a slow start and grabbed the opportunity before going on to score a 31s win from The Oak Double Bay-4 Pines (Aron Everett, Courtney Mahar, Charlie Gundy) with the much improved The Kitchen Maker-Caesarstone (Jordan Girdis, Lachlan Doyle, Tom Quigley) a further 21s back in third place.
Finport Finance was back to something like her true form to come home in fourth place, ahead of Tom Clout's Bird & Bear, Yandoo (John Winning) and Noakes Blue (Yvette Heritage).
Race 8 of the Australian Championship will be sailed next Sunday.
Spectators can see all the teams while they are rigging, then follow the racing on board the club's spectator ferry, which leaves Double Bay Wharf, alongside the rigging area, at 2pm.
Book online through the club's website www.18footers.com
AeroMedia Live Broadcast team will be out on Sydney Harbour to capture all the action.  For those who can't make it onto the water, live streaming is available at www.18footers.com and clicking on the '18 Footers TV' link.
– Frank Quealey/18 Footers League