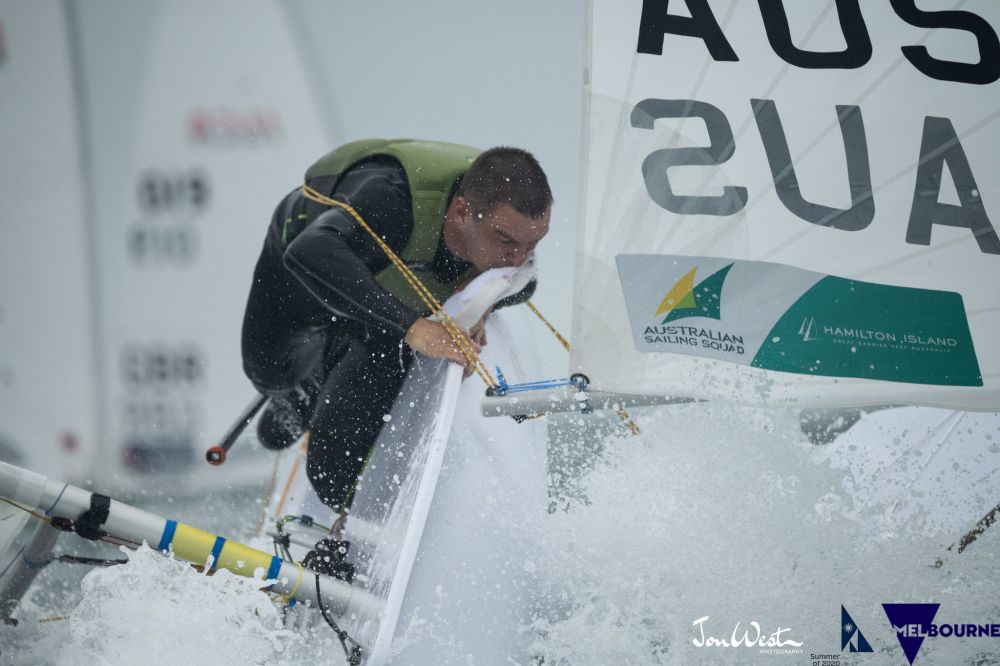 Two Olympic medallists and the sailor who holds second place overall made it tough for themselves in very testing conditions at the ILCA Laser Standard Men’s World Championship today.

With all sailors able to drop their worst race from their overall score, it hasn’t yet ruined their regatta. But they know they can’t afford another bad one.

It was a cold, wet and windy day in Melbourne, with the pressure slowly building from 18 knots to around 25 knots by the end of the afternoon, blowing from the south. No sailing was possible yesterday, so three races were sailed today, making it physically and mentally demanding for the sailors.

One man who appeared unfazed by the weather and the pressure was competition leader Philipp Buhl (GER) who had scores of 2,3 and 5 to go with his four race wins from previous days. Buhl has extended his lead over Bernaz to four points, but the Frenchman now has the spectre of the 42 point black flag to carry into the final day. He knows that one bad race will drop him out of medal contention.

“I was disappointed when I saw that I had been black-flagged,” he said. “I thought I was OK, and we will ask (the race committee to review the tapes). I know which race will be my drop now. I just had to get two good results in the other races and I did that.”

Buhl echoed the comments of other sailors, who said that it had been a very tiring day. “It was extremely exhausting,” he said of the three race program. “But I am pretty happy with how things went.”

Australian Matt Wearn has moved into third place after another solid performance. Today he was 4th, 8th and 2nd to be 11 points behind the Frenchman but a clear 10 points ahead of fourth-placed Briton Elliott Hanson, who would appear to have done enough to secure his first Olympic team spot.

“It was hard work,” Wearn said of the day’s sailing, “Made harder when you miss the shift off the start in the first two races. I had to work harder than I’d like to get back into it.”

This had been an extremely close championship during qualifying, but the gaps are now starting to appear. Three more races are scheduled for tomorrow’s final day, with conditions likely to be similar to today.

Those who are able to recover best from today’s gruelling workout are likely to top the leaderboard, while further down the fleet there are still man-on-man battles to decide who goes to the Olympic Games.