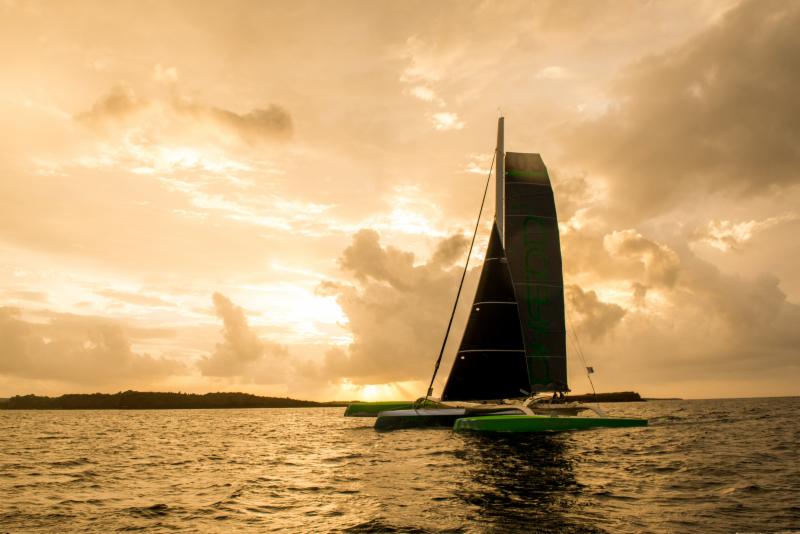 No need for pistols at dawn as Lloyd Thornburg's mighty green MOD70, Phaedo3 crossed the finish line off Quarantine Point, Grenada this morning, completing the RORC Transatlantic Race at UTC 10:56:03 in 5 days 22 hrs 46mins 03 secs. Waging a 'Master and Commander' style battle from the start in Lanzarote, Team Phaedo held onto their lead, finishing less than two hours ahead of Tony Lawson's MOD70, Ms Barbados (Concise 10) and taking Line Honours victory in the second edition of the race.

Ms Barbados (Concise 10), skippered by Ned Collier Wakefield was the second boat to finish at UTC 12:36:44 and the friendly rivalry ceased as Team Phaedo3 welcomed their transatlantic match racing partners alongside the dock.

Despite the dawn arrival, Phaedo3 had a huge spice island welcome in Grenada after over 3,500 miles at sea from the RORC Race Team, CEO of the Grenada Tourism Authority, Rudy Grant and General Manager, Glynn Thomas and his team from Camper and Nicholsons, Port Louis Marina – all there to greet the crews on the dock following much anticipation and excitement in Grenada for the first arrivals.

“It was a fantastic race. What could be better than two great islands to start and finish in (Lanzarote and Grenada); it is a really good race course and we had a great competitor in Concise! It's a fascinating course with different sections, through the Canaries and a leg to Cape Verdes (for us) and then the downwind section across. It was a great match race across the Atlantic and we were never more than 70 miles apart. That's only 2½ hours at the speeds we were going, equivalent of 20 miles apart on normal boats. We also did nearly 678 miles in one day and we averaged 28.3 knots which is fantastic. After champagne and a few cold beers, the whole team jumped into the pool and Phaedo3's Co-Skipper, Brian Thompson raved about the race:

“The last 18 hours were quite tense because when we were going south, our Satcom wasn't working so we had no idea where Concise was. You always think they are about to overtake you and it was only really an hour before the finish that we realised where they were. The last night was really quite hard as we were going through lots of squalls with gusts of 34 knots. Up until then we had it quite easy with very few squalls. Everyone shared the driving equally, so we had six really good drivers and then had three on each watch and when we needed to manoeuvre, we'd wake another person up or sometimes we'd wake everyone up. So it was quite a small team but it worked really well.”

“This was better though,” continued Brian Thompson. “Warmer water, great scenery and a longer course. “It's not like that every year of course and for some of the other competitors like Zed 6 who are really far north, they've got a totally different race to the rest of us. We are pretty happy with our southern course. It's a fantastic race and more boats should join.”

After a great welcome from Team Phaedo on the dockside, Skipper of Ms Barbados (Concise 10), Ned Collier Wakefield said it was a massive learning curve but he was pleased with his race:

“It was incredible, these boats just blow my mind. They chew up miles and they are relentless. It was pretty full on but it was really nice for us be able to stay in touch enough with Phaedo3 and to 'play' across the Atlantic. It was tough really as we had these grand ideas that we would be in shorts and t-shirts and that it would be a typical tradewind race, but it was full dry seal smocks, 20-28 knots of boat speed non-stop, and even though it was only for six days, it felt as though we'd been at sea for about three weeks!

“We had the most amazing welcome from Grenada and having the Team Phaedo guys here and Sam (Goodchild) here on the dock to greet us too, was great. Sam and I have tried to do a few Transats together and haven't got far what with boat failures etc, so to have him here was really nice and the welcome we got from Grenada was amazing. We had cold beers and we jumped in the pool. What place to rock up! We will do it again for sure. We re already setting up our programme and I spoke to Brian in the Canaries and we are going to make it next year.””At the start, we got pretty schooled by Brian (Thompson) and we struggled to keep up for ages. It took us a little while to get into it and then we found our rhythm. The big tactical decision was going down to the Cape Verdes and we decided to go further east and it paid off a little bit. To be honest these guys (Phaedo3) were really quick. Every sked they were 0.7 of a knot quicker, so we had it all to do, but it was nice not to be too far behind for sure. It was a massive learning curve for us. We wanted to learn from Phaedo and sort of do a two boat test across the Atlantic. Having a years less experience in the boat, that was very helpful because we could really work on our modes a little bit more and try and glean as much info out of them as we could.