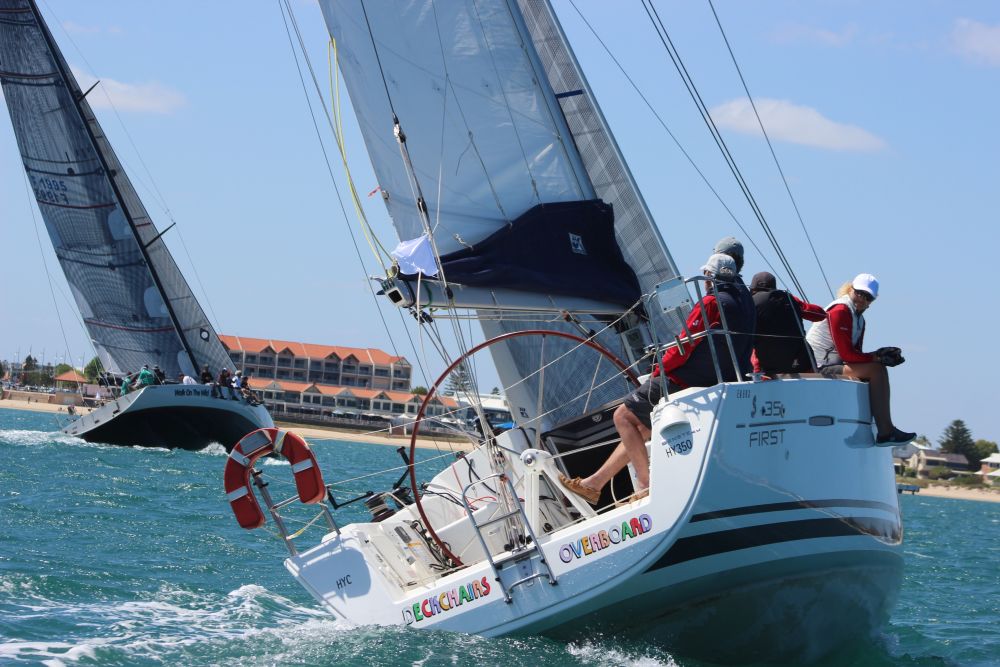 The Cockburn Sound Regatta is a four day event held between Boxing Day and New Year’s Eve on the beautiful and protected waters of Mangles Bay off Rockingham.

The Kwinana Industries Council Race to Rockingham is the feeder race for any metro based yachts and this year 20 made the 14 nautical mile trip down to join the rest of the fleet.  The race was won by Jeremy Kerr’s Farr 9.2, The Black Smoke, with Ross Taylor’s Marten 49 Optimus Prime taking line honours.  Greg Hill’s Pescott Firefly 850 catamaran provided some entertainment for the spectators by finishing both sides of the finishing mark and taking the flag with him.  He then had to do a 360 turn in front of the club which must have felt like an age.

Fifty boats were divided into six fleets and the regatta proper got underway the following morning in a building southerly.  Division 2 and the Multihulls were scheduled to have their long passage race to the northern tip of Garden Island and back and by the time they returned, the wind had built to over 25 knots and a strong wind warning was issued for the area.  This was to prove the pattern for the ensuing three days and the Race Committee lead by Neil Mason, was forced to cancel the afternoon’s racing each day.  Usually the pattern is for gentle easterlies in the morning followed by an afternoon seabreeze of up to 20 knots so this was disappointing for everybody involved.  Nevertheless, up to seven races were able to be completed for each Division and the racing was close and competitive.

Division 2 was won by David Atkinson sailing on Igawa by 1 point from Keith Thompson’s S80 Brio.  The Thompson T750 Turnham Green, skippered by Guy Skinner, showed a huge turn of pace to take line honours in 6 out of 7 races.  Division 3 was owned by Danny O’Byrne’s little Swarbrick 20 Rush, which showed the way home in most of the races.  In fact, the river based clubs gave the local boats a lesson in how to handle the conditions.  He may have won more convincingly had his father not decided to go for 2 swims in one race.

Jib and Main were divided into three fleets and it was Wendy Harrison skippering Deckchairs Overboard to the overall win in JAM 1.   The Harrisons brought a large contingent of boats from Hillary’s Yacht Club, all seemingly determined to enjoy themselves both on and off the water.  JAM 2 was dominated by Ryan Binedell’s S97, Low Flying Duck.  Hard Evidence and Huckleberry were 2nd and 3rd respectively on equal points.  Mark Barrett turned the tables on The Black Smoke by sailing his Spacesailor 27 Pegasus to the win in JAM 3.  There was some damage to 2 of the catamarans who unfortunately had to pull out, leaving the way clear for Ron Stokes’ Corsair 750 Sprint to win a close Multihull series from Louisa sailed by Ken Wood.

Onshore, the Cruising Yacht Club of WA was lively and buzzing with a variety of entertainment organised by Regatta Chair, Sonia Mason.  The highlight of the entertainment was no doubt a performance by The Lost Quays, a 9 member group singing some old sea shanties and getting everyone involved, prior to dining on a magnificent seafood buffet.

The overall Regatta Champion was determined by a formula taking into account a boat’s point score and the sum of the total numbers of boats starting in each race in each Division.  It was very close between Rush and Low Flying Duck but in the end it was the latter who prevailed.  If Danny had managed to convince his father to stay with the boat a little more often, he may well have turned the tables.