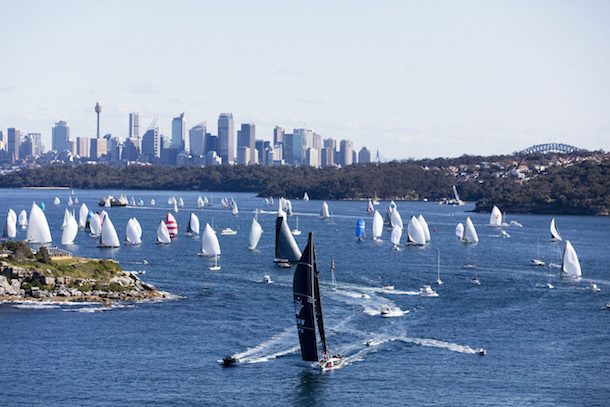 While Anthony Bell (Perpetual Loyal) continues to lead Peter Harburg’s Black Jack a merry dance for line and overall honours in the 2015 Land Rover Sydney Gold Coast Yacht Race this afternoon, most, if not all of the 62-boat fleet, has found the parking lots on the course.

With just over 55nm to make the finish line at Main Beach, Southport, the 100-foot Perpetual Loyal is around 31 nautical miles ahead of her main rival. She is also the current overall leader of the Cruising Yacht Club of Australia’s 384 nautical mile race, with Black Jack playing bridesmaid again.

Although the going is slow, with the super maxi grinding out the miles in accordance with the light breeze, Bell is comforted by the thought that his yacht is doing the job.

“I couldn’t stress enough how happy I am with our performance,” he said from the race course today. “We are very happy with the boat since it had its latest modifications – it’s working very well in all conditions. Last night we clocked up a top speed of 27 knots.

“The breeze went soft this morning and we’ve been averaging 7 knots and less. It’s a great race, an interesting race. We’re all working hard to keep the boat moving and enjoying every minute,” said Bell who expects to make the Main Beach finish line after 9pm this evening.

At different times during the day, most yachts have had a ‘park-up’, found the holes in the course, of which there have been many, pulling the yachts up to a dead stop as the wallow and even go backwards and sideways at times, but as the saying goes, ‘that’s yacht racing’.

The 1981 built Quikpoint Azzurro (Shane Kearns) hasn’t suffered too much, continuing to flirt inside the top five throughout the day – now holding her own in third place overall. It is incongruous to think that an old S&S34 is up in the top placings alongside the two largest yachts in the fleet. Next best placed is Michael Selby’s Cyrene 3, a 12.5 metre Niels Jeppesen design.

The best placed Queensland boat is Tony Horkings’ Lee-Way, in fifth place overall. The Northshore 38 is representing Southport Yacht Club, the race’s finishing partner. One of the smallest yachts in the fleet, at 11.6 metres, Horkings says that “despite a modest budget and a 22 year-old boat, we are still are in it to win it.”

From Wild Rose, navigator Jen Wells says: “Roger’s chirpiness has served us well during a frustrating day – frustrating for most I assume! The going is slow, we need to stay positive.”

Wild Rose has dropped to 17th overall from her lead position of this morning, but Hickman and his crew know the ropes. “Everyone knew in advance that Sunday was going to be the tough day,” he said earlier.

Paul Clitheroe, owner of Balance, has left his TP52 in the hands of Mike Green and crew while he celebrates his 60th birthday in Europe. However, the ‘Money Man’ still takes an interest in the race and his boat’s progress, as he has done in the past.

“Well the good news is I am not on top of Mount Kilimanjaro as I was in 2011 and 2013, as Balance races to towards Southport,” he emailed. “This time, as Mike Green skippers her in the Land Rover Sydney Gold Coast race for me, I am in an Irish bar in Killarney, pint of Guinness in hand and doing a spot of Irish jigging. Mind you, as usual, they seem to do better without me, so…”

Clitheroe had checked his yacht’s position out before going to bed – and before the wind dropped. Now Balance has dropped to 37th place overall. It is closing in on 7am in Ireland, where Clitheroe will be rubbing the sleep out of his eyes before seeing the latest news.

For all information on the Land Rover Sydney Gold Coast Yacht Race, go to: http://goldcoast.cyca.com.au/