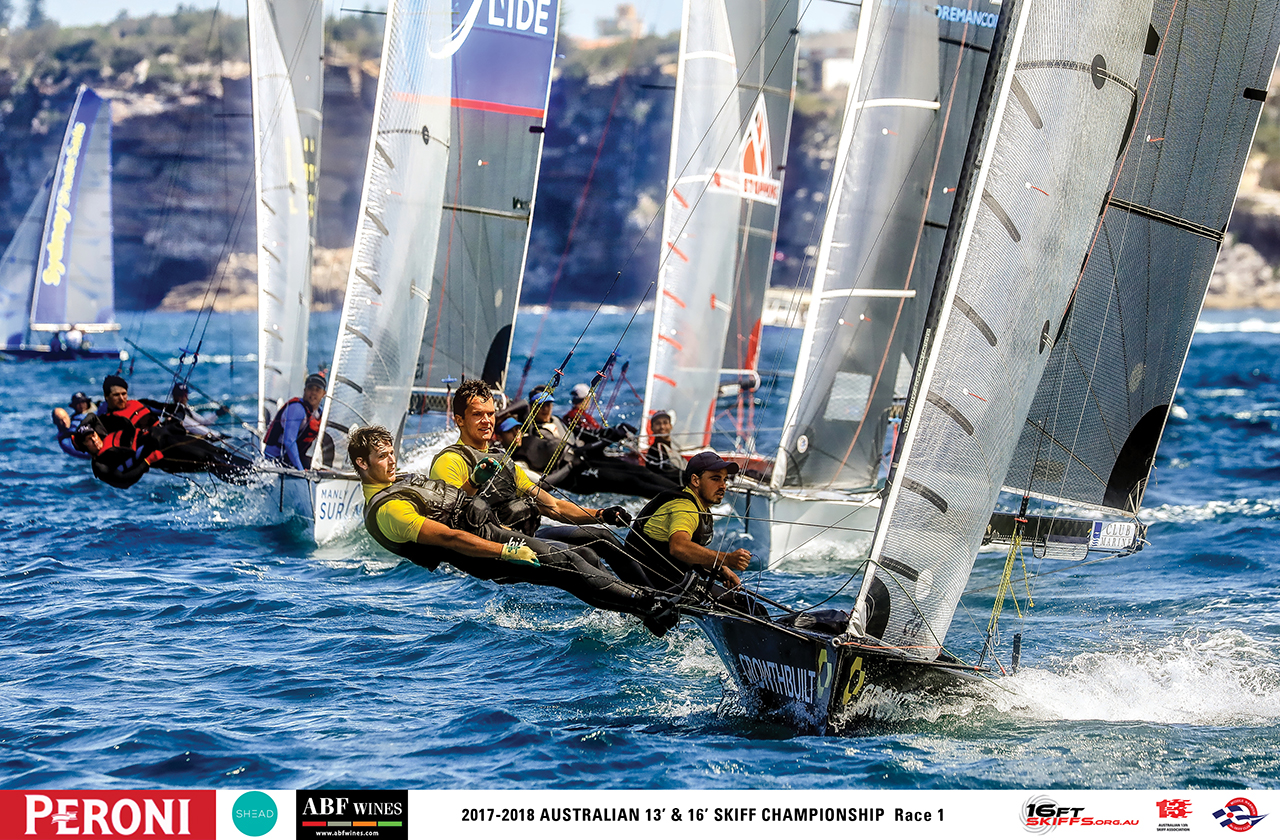 Just as the first race of the Formula One Season generates – powerful machines being launched onto the track, horse power ready to explode. A lot of chest beating amongst the gladiators.

Now move it forward to the first heat of the Peroni 16 and 13 foot Australian Championships.

Setting the scene … in the mighty Sydney sound boarded by North and South Head the thoroughbreds gathered in a 14 knot ENE sea breeze, still enough to get the flying machines to weave their magic.

Like eager colts out of the blocks heat one started with two general recalls as each boat tried prove their dominance; then the evil black flag at the third start cooled their heels and it was all go. Clean start.

Adopting for the first time in Australian 16 and 13 skiffs history, a true Olympic style course concept of windward leeward with a double bottom gate has been adopted. The flying machines launched from the start; many decided on the left favored side of the course and others tried their luck by going right hoping for the card of luck, sadly to no avail.

At the top mark there were a few favorites but a few ‘bolters’ as well. Leading the pack was Belmont’s Southern Beaches Rugby [SBR]. Rounding the top mark a critical decision to either run or gybe set proved to be the difference at the bottom set of gates; those who ran to the west won out. However 200 metres from the bottom gate one the leaders “GrowthBuilt” lost crew member overboard and having to return to pick up the crew member they had to weave between the rest of the fleet screaming into the bottom marks – wasn’t pretty to say the least.

Over the remaining laps the lead changed at least five times with different boats taking momentary glory however SBR still held on. BUT the breeze started to drop and tactics opposed to raw speed came into play.

Ex national champion Byrdens started to make its run with veteran sheet hand Peter Mackie pumping their machine; be it with a most unusual style. They were ready to pounce.

Korman Marine Composites [KMC] ground their way thru fleet to round the next top mark second but it was a hot parade the followed close behind.

From further back than full back Sutech made its charge down the run, picking the shifts and gusts with perfection.

The quiet achiever was Manly Surf n Slide [MSS] and down the last run it became the battle of the brothers Turner – Sutech V MSS. Gybe for Gybe we were in for a fantastic finish. In the wash up it was big Bro [Sutech] inching out his younger sibling with just 7 Secs splitting the warring family rivalry.

SBR flew home a mere 40 secs to grab third, and the ever lurking Brydens less than 30 secs behind.

All in all it is definitely game on as the photographs from the legendary Michael Chittenden will attest to. Heat two today and we’ll see what the mixing bowl of thoroughbreds will bring us.

In the 13 foot class it too was a close battle, with just less than 4 mins covering the first 6 competitors. Again seconds spilt these flying machines between marks. At one point the driver of the Short Marine chase boat noted that a 13 completed a downward leg faster than some of the ‘big brother’ 16’s. In the end it was girl power that prevailed with Jordan Ferguson, daughter of ex 16 legend Graeme prevailing. Her forward hand Ollie Parker who was the Knox Grammar Sailing team captain I’m sure brought in some very useful teams racing tactics when required. It was great to see the feeder class performing so well alongside the bigger brothers.