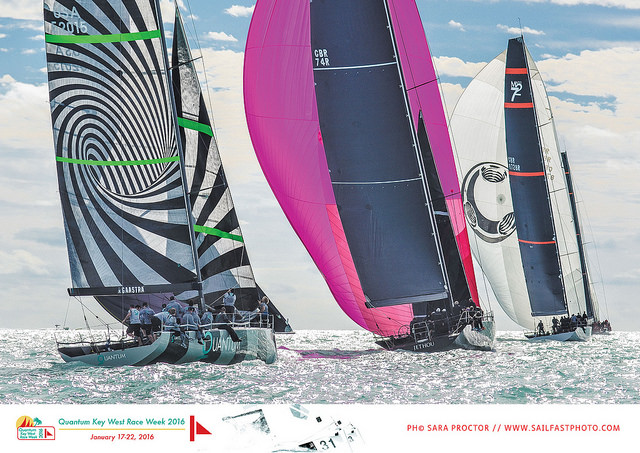 Key West, FL, USA — Quantum Key West Race Week 2016 got off to a rousing start on the City of Key West Day with strong winds welcoming the 133 boats in 12 classes and organizers getting in three races on all three divisions.

While the tourists enjoyed Martin Luther King Holiday by strolling Duval Street, sailors from 16 countries took the azure waters off the southernmost point of the United States and found ideal conditions – northeast winds that exceeded 20 knots for Race 1 and diminished slightly for the subsequent starts when the sun broke through and brought out the azure seas so famous in Key West.

It was a bumpy day on the water with three to four foot waves rolling through the course areas, giving a challenge for all teams. There was some drama on Division 3 with the GP 26 Rhumb Punch getting hooked on the starting line pin boat and the FarEast 28 Eagle's Eye suffering a starboard lifeline failure that sent three crew members overboard.

Rhumb Punch needed about five minutes to work itself free and head up the course while the mostly junior crew aboard Eagle's Eye did a fine job of recovering its crew within less than 10 minutes, under the watchful eye of the event's rescue team.

Ken Legler (Boston, MA), longtime principal race officer on Division 1, set a leeward mark a half-mile further downwind for the Maxi 72 class in order to give the four biggest boats in the regatta more of a runway in deep water. Skipper Alex Schaerer (Mreihel, Malta) and his crew on Caol Ila R enjoyed a strong opening day – winning Race 1 then placing second in Races 2 and 3.

“The boat and crew were going really, really well today. It was a struggle to get off the start line, but the guys did a great job of digging out of a hole and putting up three good results,” said John Cutler (Auckland, New Zealand), tactician aboard Caol Ila R.

Bella Mente (Hap Fauth, Minneapolis, MN) recovered from a fourth in Race 2 by winning the final race of the day and was one point behind the leaders in the overall standings. Caol Ila R has undergone extensive modifications – installing a new rig and lengthening the keel to the maximum depth – and Fauth said the boat's speed is clearly improved as a result.

“The boats are very, very even. Only three clicks separate the whole fleet so it's almost like one-design racing,” Fauth said. “It was very good sailing today, very fun sailing. All the boats are faster since the last time we saw them, which we expected. In this class, if you're not going forward you are going backward.”

Quantum Racing emerged from the first round of fighting atop the standings in IRC 1, which features three TP52 designs going against a Botin 44-footer. Skipper Doug DeVos (Ada, MI) steered Quantum to a strong line of 3-1-2 as the boat representing the regatta's title sponsor took an early one-point lead over Gladiator (Tony Langley, Great Britain).

“I thought the crew did a nice job in challenging conditions today,” said Quantum Racing tactician Morgan Larson, (Santa Cruz, CA). “We didn't overstand any marks and we never got stuck on the wrong side of a shift.”

DeVos is sailing with the core of the crew that helped Quantum Racing finish second in the 2015 TP52 Super Series. Larson is the most notable newcomer and said on Monday afternoon that he is still getting acclimated to the team.

Skipper Andrew Weiss (Mamaroneck, NY) and his crew on the Sydney 43 Christopher Dragon got off to a strong start, winning two races and placing second in the other to take an early two-point lead over the J/125 Double Trouble (Peter Krueger, Reno, NV).

Peter Wagner is a first-time skipper in Key West and made an impressive debut, winning all three races in J/111 class – earning City of Key West Boat of the Day honors aboard Skeleton Key. Wagner (Atherton, CA) is a San Francisco Bay sailor and is thus accustomed to big breeze.

“That's our home turf so these are conditions we are certainly very familiar with. That said, this venue is very different from San Fran,” said Wagner, who has another Bay area sailor – Seadon Wisjen – aboard as tactician.

Wagner took delivery of his boat last May and this is only the fifth regatta for his team. He called Key West Race Week a “legendary regatta” and admitted he's been remiss in not previously attending.

“We got off the line clean and stayed in phase. We didn't try to make it too complicated,” Wagner said. “We're not going to get too excited about one day. It's a long regatta and I'm sure the other boats will have their moments.”

In the J/70 class, Carlo Alberini (Pesaro, Italy) and the Calvi Network crew picked up where they left off last year – posting a pair of bullets and taking third in the other race. Calvi Network captured class honors at Quantum Key West 2015 and earned Boat of the Week honors as a result.

Tim Healy and his team on Helly Hansen got the gun in Race 3 to move into second place, five points astern of Calvi Network and just one ahead of Flojito Y Cooperando (Julian Fernandez Neckelman, Mexico City). It is no surprise to see those three boats atop the leader board since they finished 1-2-3 at the J/70 World Championship.

“It was a great day on the water. I'm glad we got three races in… real happy the race committee decided to do that,” said Healy, whose team overcame a broken spinnaker halyard. “It was breezy and a real bumpy – a lot more than I remember. We're pleased with how we did on the first day.”

And the Corinthian Boat of the Day winner was Luis Bugallo's J/70 Marnatura from Vigo, Spain, on the strength of earning a 13-12-13 scorecard today in the 54-boat class.

Elsewhere on Division 2, John Brown and the Blind Squirrel team seized the lead in Melges 24 class on the strength of a 2-1-1 score line. Kevin Jewett is calling tactics for Brown, a Philadelphia resident.

C&C 30 has a one-design start at Quantum Key West 2016 for the first time with Walt Thirion (Annapolis, MD) and the Themis team setting the pace on Day 1. Annapolis-based tactician Geoff Ewenson is helping get the team around the courses this week, and is looking to improve on their second places earned in the only other two C&C 30 one-design regattas held to date.

Thirion said the Themis crew had to repair two genoas that suffered damage prior to the first race. “I'm just glad we were able to sail,” he said. “I give the crew a lot of credit for working together to overcome the obstacles we faced today.”

Some of the closest racing of the day came in the two ORC classes competing on Division 3. Teamwork and Orion, a pair of J/122's, chased each other around the course all day and wound up separated by just one point. Skipper Robin Team steered Teamwork to results of 1-2-1 while counterpart Paul Milo (Leesburg, VA) led Orion to a 2-1-2 score line.

“Just as expected, we really mixed it up with the Orion boys,” said Team, who hails from Lexington, NC. “We had a real nice tacking duel on the last upwind leg of the third race.”

The ORC system also seems to be working well among the sportboats in ORC 2, where Mike Beasley's GP 26 Rattle N Rum has a slim 2-point lead over Henry DeGroot's J/80 Wired. This is only the second day this Kiwi transplant to Annapolis has had in the boat, but he had high praise for its performance, while realizing there's more to come as they learn their boat.

“The boat is really stiff upwind, so we kept loading up the runners and going faster and faster until the blocks broke. But we got the rest of the rig tune right, and the boat is really fun off the wind: we learned you need to go fast and high, which is where we made our biggest gains on the course. We're absorbing more and more, and the boat is rewarding us as we learn.”

Mike Bruno got the gun in Race 3 after placing second in Race 2 and is atop the eight-boat J/88 class by three points. Rob Fear is calling tactics for Bruno, a resident of Armonk, NY.

Tomorrow's forecast is for big breeze of 25+ knots to return in the night and into the morning, suggesting a possible delay to the start of racing as the forecast indicates diminishing wind through the rest of the day.

Complete results, photos from Max Ranchi and Sara Proctor, and videos from T2P.TV are available on the event website at www.keywestraceweek.com.