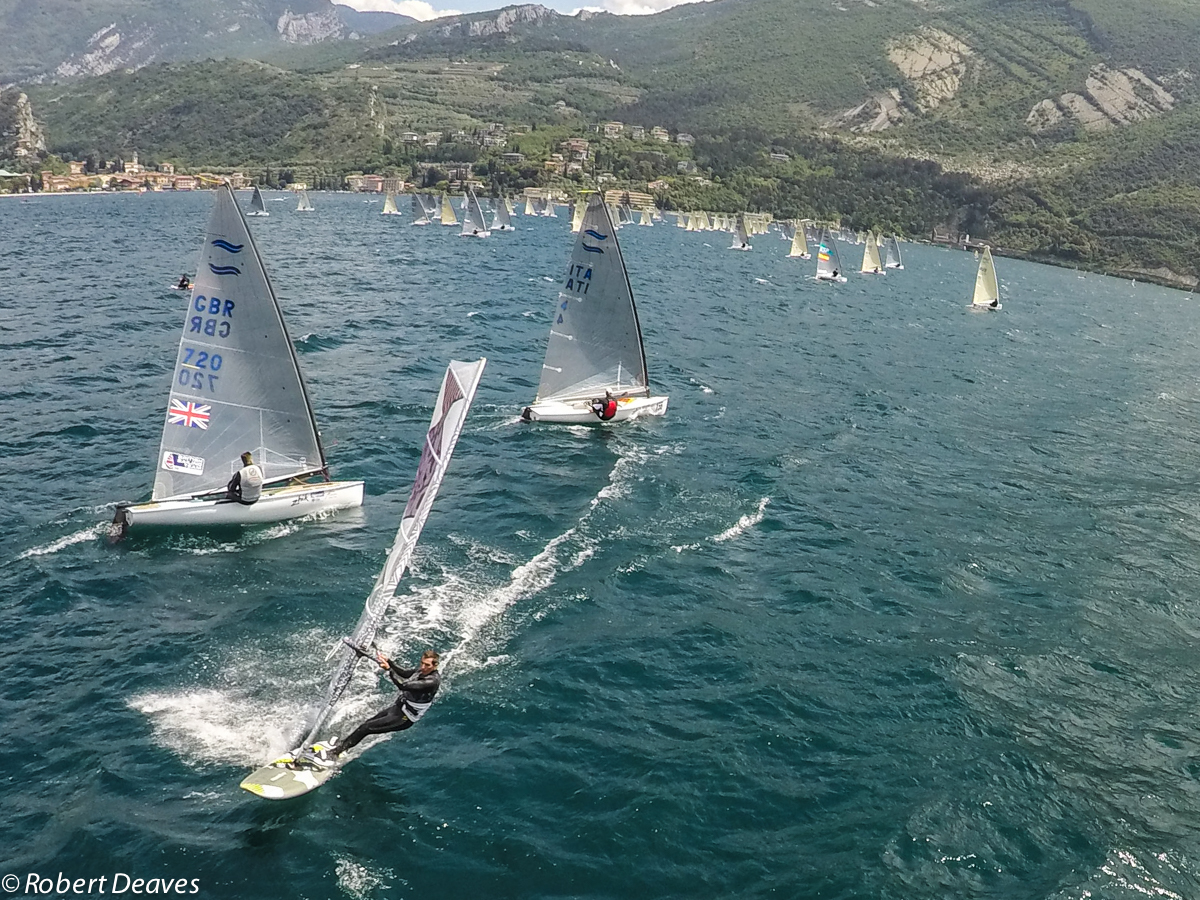 Risk management was the deciding factor on the second day of the Finn World Masters in Torbole as local knowledge and Garda geometry meant that there were many changes in position through the four groups as the 355 Finns battled against strong, cold and remarkably shifty winds all day. Rafael Trujillo (ESP), Vladimir Krutskikh (RUS) and Mike Maier (CZE) all recorded a perfect score with two race wins each, while other race wins went to Harles Liiv (EST) and Yuri Tokovoi (UKR).

After a week of non-Garda like conditions, the pattern seemed to be restored this morning with a northerly wind on the lake in early morning. True to form the breeze died during the morning to be replaced by a strengthening southerly that rose to around 20 knots for most of the day, though with some sizeable calmer patches passing down the lake catching out the unwary, or just the unlucky.

Many of the top sailors increased their points score today with now only Trujillo and Krutshikh on minimum points. The random fleet allocation software randomly decided that these two would not meet at any point until the medal race, so if there is to be a showdown it will have to wait until Friday.

Piet Eckert (SUI) was dominant upwind in his group but couldn't hold off Krutskikh downwind and Luuk Kuijper (NED) led one race for a while before being reeled in by Maier downwind. Vasiliy Kravchenko (RUS) led round a top mark before Trujillo recovered from a poor start and motored through to the lead. The stories from the day are endless.

While the championship is only at its half way stage, there is still a long way to go with just three points separating the top four. The top four are all former Olympians, but Trujillo is showing the greatest speed of all of them so far, and for many, remains the favourite.

After nearly fifty years of competition, the Finn World Masters remains one of the most important events in the International Finn Calendar. A quarter of a century ago the event name was changed from the Veteran Gold Cup to the Finn World Masters to reflect this. The Masters has been often copied but never matched. It has survived because of the camaraderie and support of large numbers of Finn sailors worldwide who just enjoy racing a great boat together with friends made through a lifetime of involvement in the class. Many of those who raced in the early Veteran worlds are here this week, attracted by the spirit of the class and the intense competition. No one gives away an inch in a Finn race and that is as true today as it was half a century ago, at all levels.

Racing on Garda continues until Friday. There is a maximum of four races left, three fleet races and then the final race and medal race on Friday.

Sailing continues on Wednesday, when in a change to the programme, two races have been scheduled from 14.00 after the Annual Masters Meeting in the morning, where among other matters, the venue – Marsala, Sicily or Balis, Spain – for the 2018 Finn World Masters will be decided.