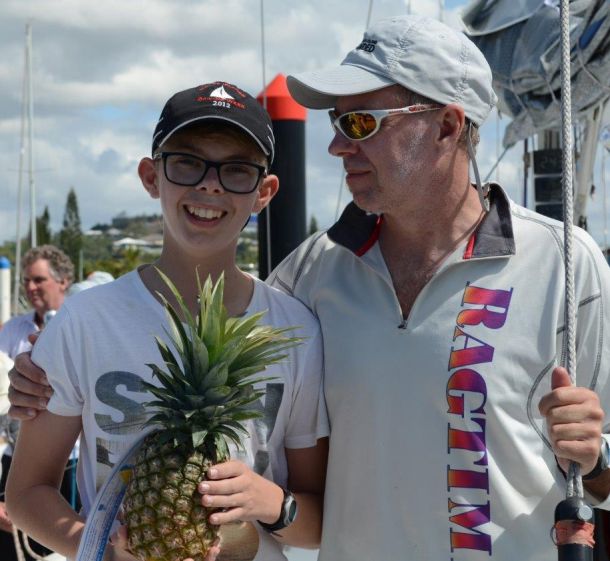 Austin, who turned 15 the day the race began on Thursday July 30, and his dad David joined the team on Peter Kruger’s Archambault 40 Broadsword and this afternoon they motored into Keppel Bay Marina after three long days at sea.

“It was really enjoyable,” said Zack. “I was lucky it was very light, the perfect first ocean race to get me started. I’d love to do another one! I leant new knots, some new terms …. “and some new language from Phizzle [Phil Houghton],” David chimed in.

A highlight for Zack was being two boat lengths away from a whale at Breaksea Spit off the north east Fraser Island coast on Saturday, August 1. “The whale had its flipper up almost like it was waving at us. I have some pretty cool stories for the guys back at school.”

Zack was on the opposite watch to his dad and David acknowledged the effort of that group, which included many sailing mates from his time living in New Zealand, to make his son feel part of the team. “The guys looked after him like he was their own son. Zack was great on the boat, you only had to tell him things once.”

Owner/skipper Peter Kruger called a crew meeting at 7am this morning to look at the forecast and decide whether to continue racing. “We looked at the forecast and how long we had to travel and we could have taken another day. We have several international guys on board with planes to catch tomorrow, and Zack has school. Disappointing as it was, we thought we’d motor the final 40 miles to at least get in for part of the festivities.”

Now that Robbo Robertson’s Corrobboree from the Royal Queensland Yacht Squadron has a finish time, the IRC division 2 overall top score goes to Todd Anderson’s Mumm 36 Corum. Anderson said the key was not to get impatient. “It was about looking at the elements around you and lots of discipline, and keeping your cool. We are very pleased.”

Like Corrobboree, Corum is going on from Keppel Bay to Hamilton Island for the IRC Australian Championship that has drawn 40 of Australia’s best IRC boats.

Skipper of the Southport Yacht Club based Olsen 40 She, Philip Bell, the last yacht due to finish later this evening said the crew knew the wooden spoon award was theirs. “Morale is terrific on board and the joke telling hasn’t been too bad. We have plenty of food and water and we are OK for making our flights out,” said an upbeat Bell.