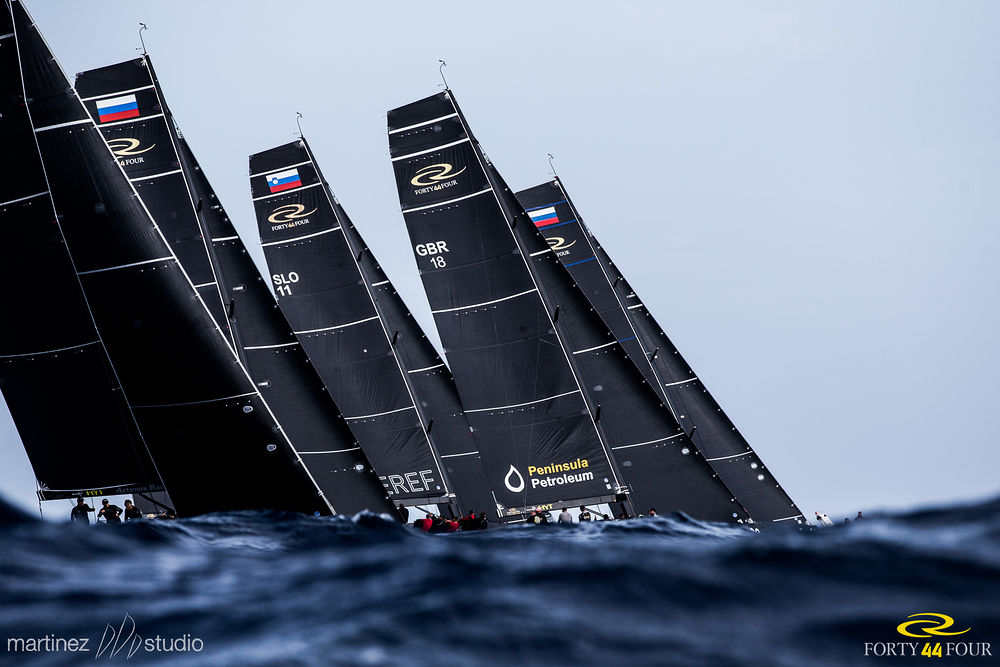 Chris Bake seemed to light the touch paper on board his Team Aqua during the second day of fleet racing at the RC44 Valletta Cup. The longest serving team in the RC44 class' 10 year history was in a different league, achieving a perfect score line in today's three races, despite challenging conditions off the Maltese capital.

“With the fleet as tight as it is, to be able to pull that off feels good,” said a beaming Bake once ashore at Valletta's Excelsior Marina. “We managed to sail the boat really well and everyone was on point. I think Cameron [Appleton] did a superb job with the tactics, because it was shifty and up and down, requiring a lot of gear changes. It was a really fun, strong day.”

A foreboding forecast had predicted a 20+ knot wind, dropping and shifting right dramatically. In fact the southeasterly was more benign, peaking at 17 knots, although a long cross-swell made life difficult on port tack, heading towards the Valletta shore.

In the first race, Team Aqua tactician Cameron Appleton found a good lane off the start, quickly tacking off to the favoured right and kept it simple, continuing to the starboard tack layline – which he called perfectly – allowing Team Aqua to lead into the top mark ahead of Katusha. From there the crew defended well with Artemis Racing Youth pulling up to second on the first run.

Race two and the right was less favoured. With teams playing the middle it was Frenchman Hugues Lepic's Aleph Racing which fought to round the top mark first. But Team Aqua was close behind, rounding alongside Nico Poons' Charisma. While Aleph Racing gybed immediately, Team Aqua left it longer and took the lead, rounding the leeward gate ahead of Charisma and Torbjörn Törnqvist's Artemis Racing, positions which were maintained to the finish.

Chris Bake's team performed a similar feat in the final race of the day with the wind now down to 12 knots and boats disappearing in the troughs of the long swell. This time Vladimir Liubomirov's Bronenosec Sailing Team was first to the weather mark, but once again Team Aqua was on the leader's transom. Behind, the fleet got gridlocked attempting to round the mark simultaneously. On the run, while Bronenosec continued on starboard, Team Aqua was first to gybe and managed to find a lower mode causing her to roll the Russian team and take the lead. The final run turned into a three horse race with Team Aqua successfully fending off advancing Team CEEREF and Team Nika.

According to Bake this is not the first time Team Aqua has managed a perfect scoreline, but it took some doing: “It is pretty full-on, but I think as a team we respond well to pressure and then some success – we build on that. Everyone stayed focussed and it was a good day.”

Bake admitted finding conditions harder the lighter they got. He paid tribute to his crew: “They did a really great job and I kept my head down and kept the boat going – it was tough in these conditions, but it was tough for everyone.”

Clearly having Bake on board Team Aqua was good motivation for the crew. “It was a tricky day and he did a fantastic job,” said Cameron Appleton. “He had the boat going really well upwind – locking in on those was where we established ourselves. The cross swell was throwing the boat around on port tack, but that was where you made the gains. Chris being able to put us into a good mode and being locked in and fast, was key. Linking up the puffs downwind was my challenge…”

Otherwise today consistency was difficult even for top teams. Team Aqua picked up just three points, while the next best scoring boat, on 14, was Nico Poons' Charisma, winner of last year's RC44 Valletta Cup. Poons said they would have done better today had it not been for race three: “In the first two we did quite well, with a fourth and a second, but the last race turned out to be eighth but the finish was so close it could have been second as well. Yesterday we had a terrible day so things seem to be getting back on track more.”

Thanks to her performance today it is no surprise that Team Aqua is now overall leader in the RC44 Valletta Cup with a nine point margin over Artemis Racing and Katusha with two days of fleet racing left to go.