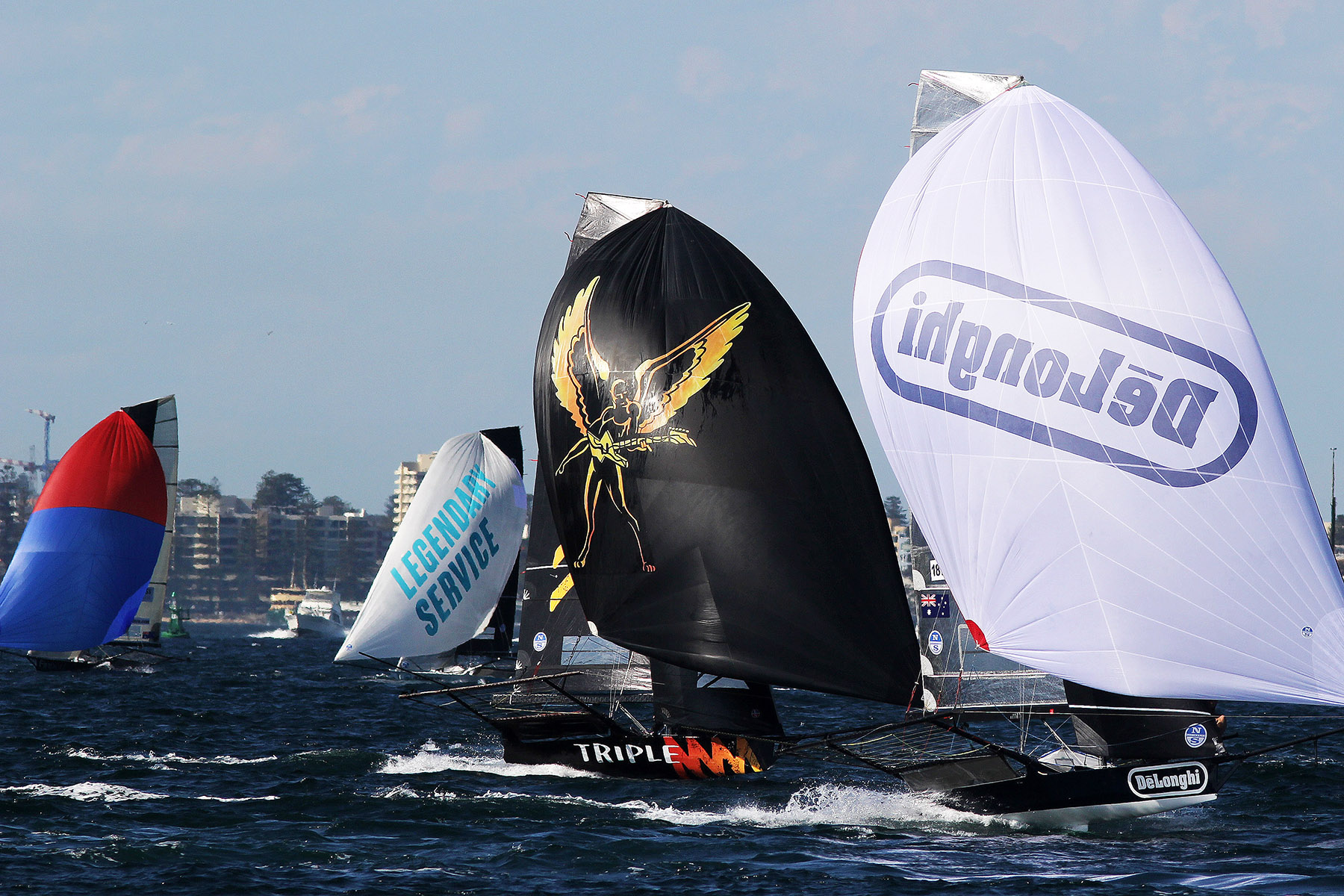 30/10/2017
After three weeks of light, flukey conditions, the 18ft Skiff fleet was blessed with a perfect 15-knot Nor'Easter wind for Race 4 of the Australian 18 Footers League Spring Championship on Sydney Harbour today.
The breeze brought with it some great racing and resulted in victory for the experienced De'Longhi crew of Simon Nearn, Grant Rollerson and Brandon Buyink.
De'Longhi's team grabbed the race lead on the second windward leg of the three lap race and withstood a strong challenge from Triple M (James Ward, Adam Gillson, Huon Oliver) to take victory by 18s. The Kitchen Maker (Stephen Quigley, Tom Quigley, Sam Ellis) was always in or near the lead throughout the race and finished a further 34s back in third place. Finport Trade Finance (Keagan York) was fourth, followed by Appliancesonline.com.au (Brett Van Munster), Yandoo (John Winning), Coopers-Rag & Famish Hotel (Bryce Edwards) and backmarker Smeg (Lee Knapton).
After four races in the seven-race Spring Championship, the points lead is shared by three teams Triple M, Coopers-Rag & Famish Hotel and Yandoo on 22 points. Finport Trade Finance is fourth on 24 points, followed by Quality Marine Clothing (Aron Everett) on 26 and Appliancesonline.com.au on 27 points.
The Kitchen Maker won the start at the windward end of the line and staged a battle with Finport, Triple M and De'Longhi on the first windward leg to the Beashel Buoy marks. These three skiffs were prominent down the spinnaker legs past Shark Island to the bottom mark off Clark Island.
Triple M grabbed the lead (despite a near miss with a Finn class boat) but Finport with her bigger #1 rig had moved up into second place ahead of The Kitchen Maker and De'Longhi.
De'Longhi was making inroads into the lead and took over as the fleet completed the second windward leg of the course. The Kitchen Maker was in second place, followed by Triple M, Appliancesonline, Yandoo and Panasonic Lumix (Jordan Girdis).
Once again, racing was close right through the fleet and the championship outcome will go right down to the wire.
Race 5 of the Spring Championship will be sailed next Sunday. The Australian 18 Footers League's spectator ferry will follow all the action.  The ferry leaves Double Bay Public Wharf (alongside the clubhouse) at 2.15pm.
Live streaming is also available through www.18footers.com.
Commentators include former 18 footer champions to explain everything that's happening in detail.