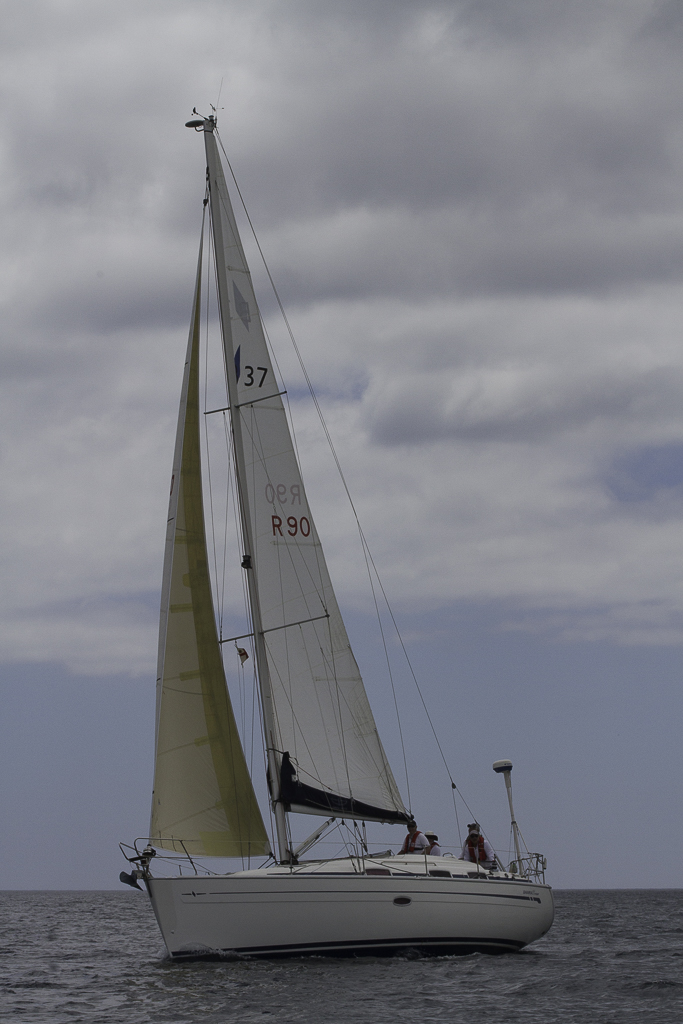 After awful conditions on Monday, when sea mists and heavy rain combined with minimal breezes, day 3 was spectacular. Bright sunshine and a delightful, steady 10 to 12 knot breeze made racing a joy for all divisions.

The Viper fleet completed its race program with the last three of their windward and return races. Rod Beurteaux consolidated his strong position by winning all three races to win the overall regatta with a perfect score of 7 points after dropping a brace of second places. Michael Navarro’s Fizz was runner up on 13 points and John Park’s Velocity finished in third place. The series proved a very good test for skippers in all conditions. Strong winds on the first day threatened to derail the start of their regatta, but once racing started it proved exciting for competitors and spectators alike. By contrast, light winds and heavy rain on the second day were challenging for quite different reasons so today’s breeze made for a perfect conclusion to their program and a great precursor to their World Championship which will be held on the Swan River in February next year.

Royal Perth Yacht Club commodore Mike Campbell put aside a forgettable second day, when he had the misfortune to collide with another yacht, to post a good victory in Division 3’s passage race. Barry Brown and Greg Simpson, both local sailors, were next in Electric Tram and Conrad Todd rounded out the podium in Stand Aside. With one drop in the scoreline, Ken Waller’s Let’s Dance heads the points table from Laurie Flynne’s Dynamic.

Denys Pearce had another good day with a win in the IRC division ahead of La Premiere and enjoys a comfortable lead on the leader board with 3 points, ahead of Dynamic with 6.

Another clear line honours victory for David Clifton’s Thirsty Work was only good enough to earn the boat ninth place on corrected times. Peter Sims steered Fidra to victory and Jon Birch’s Crews Control was second. Although Tilt, sailed by Geoff Salter and Dave Godfrey pushed Ross McLaren’s French Kiss V out of a podium position, French Kiss shares the lead on the points table with Fidra for all races to date.

Lady Liza, sailed by Tony Mills, is the quiet achiever in the Jib and Main fleet. With victory in today’s race, she now moves to the top of the points table, one point ahead of Gary Griffiths’ Heaven Can Wait.

Wednesday’s lay day should have the most sailors and their families making the pilgrimage southward to sample the delights of the vineyards in the Margaret River region, but all will be back in action for the resumption of battle on Thursday.