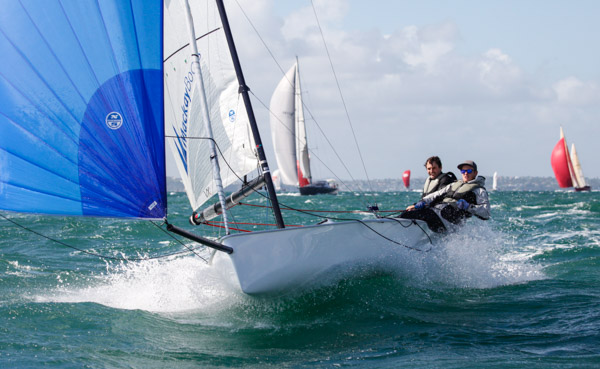 A fleet of 141 boats started this morning's PIC Coastal Classic Auckland to Russell yacht race, in conditions that can only be described as any sailor's dream, with the wind coming from the South-West, and with just the right amount to make it great fun.

First to fire were the smaller entrants in divisions three and five and the cruising boats, the bulk of which opted for a mid harbour start, sailing a conservative line to North Head before hoisting spinnakers and gennakers in a 15-18 knot breeze with choppy tidal harbour conditions.  The Navy's entry, Paea II, had a very notable start in this division, opting for a direct line course well to leeward and poking its nose out near the front of the fleet after a clean spinnaker hoist.

The second start included the solo entrants and divisions 2 and 4, with the little Ross 930 No Worries pulling off a heroic start under tight fractional gennaker, and Force Eleven and High Octane pulling off aggressive starts from the wharf end.

Frank Sailing (formerly TeamVodafone) held back from the mob start, but pushed through once the gun had fired, leaving the big fifty footers, Mayhem, Viento and Temptation, with a clean run from mid line, through to North Head, with the pressure showing as Temptation briefly struggled with her gennaker.

At 1545hours, the Orma 60 Frank Sailing was closing in on Brett, but sailing at a speed of less than ten knots, with Taeping closing in with 17 knots of boat speed, and Sundreamer at 16 knots of boat speed off Matapouri. Further out to sea the TP52 Mayhem skippered by Harry Dodson is the first of the monohulls.

Forecasts show wind in the Bay of Islands to continue as a moderate South Westerly which, allowing for tide and the rounding of Brett, should enable a fast finish for the fleet after Brett.

Although conditions are as good as they can get in coastal racing, the event hasn't been without incident: One of the solo competitors was required to climb his mast to fix a halyard, and another boat hit a shark. Many have reported dolphin sightings. Most if not all – if reports are to be believed – are having a great time.

The 141 entries include one all female crew, seven solo entrants, and five boats with just two crew.