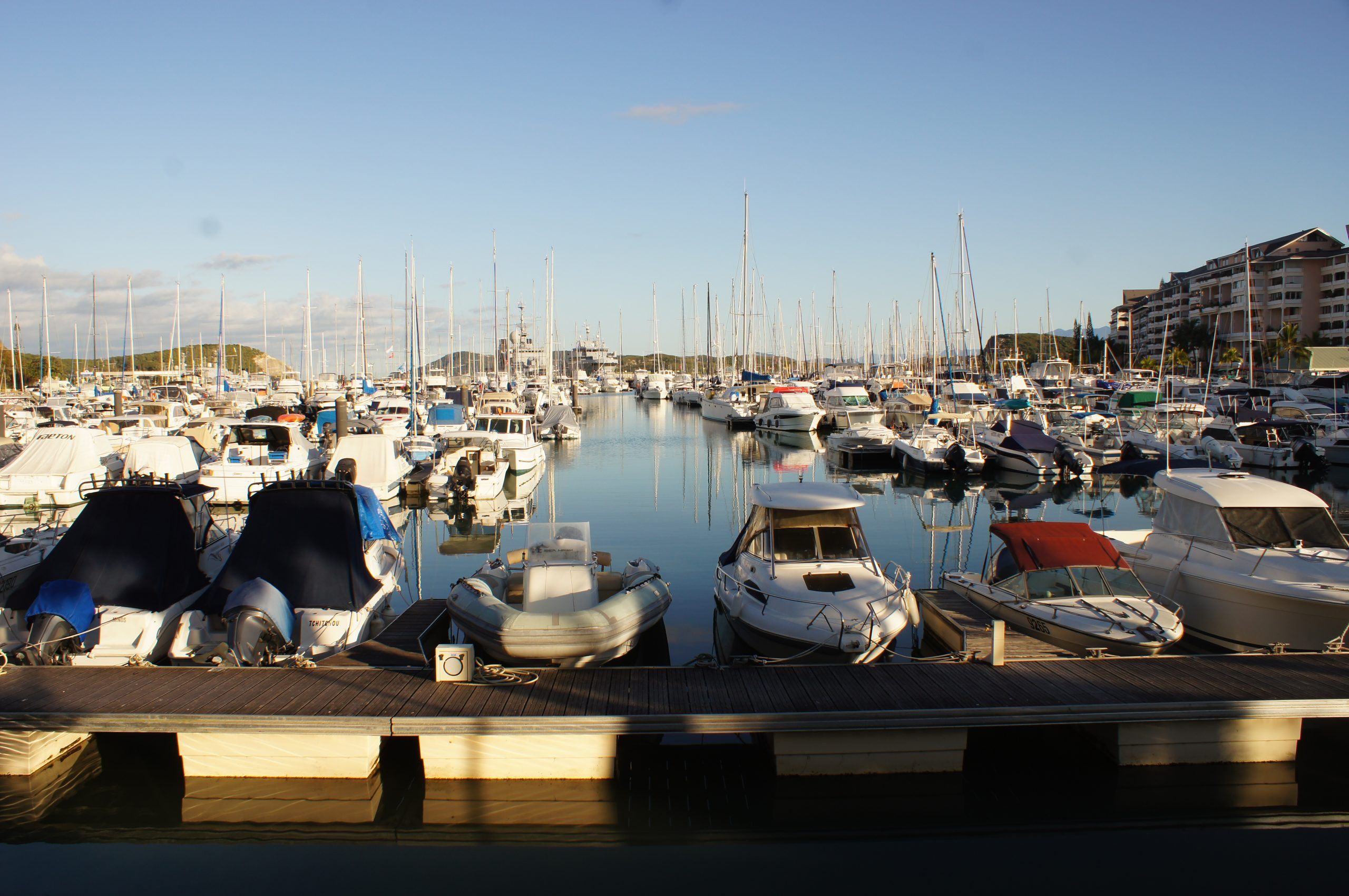 Good steady breeze greeted the nineteen yachts manoeuvring before the start of the Groupama New Caledonia race. I was reporting on the race as a guest of Tourism Nouvelle Caledonie and this was a great way to start my visit.

It was the fifth running of what is quickly becoming a popular race within the French collective. As the local enthusiasm grows it spreads to the near neighbours: New Zealand, Australia and even Hong Kong. This year's race included a first, the inclusion of multihulls.

Considering the sponsorship of French financial services company, Groupama, it was only natural that multihulls would be included. Previous year's has seen Franck Cammas attend the race but this year with his America's Cup commitments one of the other great French sailors, Michel Desjoyeux, attended.

So not only did the large crowd of yachts at the start get to see the gigantic trimaran Vodafone from New Zealand; also competing was the renamed Scallywag, the former 100 foot Ragamuffin now flying the flag of Hong Kong but still skippered by David Witt. Filling out the large yacht category was another Hong Kong yacht, the 24 metre Beau Geste owned by Karl Kwok and Australia's Matt Allen delivered his Carkeek 60 over to have a tilt at the race as well.

There was a couple more overseas entries with the local NC crews filling out the full 19 yacht fleet.

Billed as the longest windward/leeward race in the world it turns out this race was more demanding than that would infer. In fact, the warm Pacific tradewinds did not turn up this year and this made the race even more demanding.

To assist in making the race a spectacle for the locals, the start included a triangle just off the coast of the capital Noumea.

At the gun Scallywag unfurled its enormous Code 0 with a loud 'wang' and sped off the start line with Beau Geste hanging on her heels. Both Vodafone and Ichi Ban got caught out and were slow to start.

By the first mark the massive tri had hit her straps and was nearly two minutes ahead of Scallywag, with Beau Geste just 15 seconds behind her. By the second mark, Vodafone had stretched another two minutes from the monohulls and was gone.

After rounding the start mark again the fleet strung out for a long broad reach down to the bottom of New Caledonia.  It was a fantastic way to start the race making good times for all, rounding the bottom of the island the wind is funnelled through the Canal Woodin and Vodafone relished in a 29 knot run. Scallywag's David Witt said they hit 24 knots in 20 knots of true.

But, by nightfall and with the incapacity of the tradewinds to make her presence felt, the race turned into one long tactical battle from there on.

Staying quiet and from the west it was up to the navigators and tacticians to try and decipher when and where the breezes would come from: “a very tactical race,” said Beau Geste's navigator Will Oxley.

“You have limited options to duck in and out of the outer reef,” he said, “you can get thermals close to the land at nighttime but you want to be out to sea during the day but there are limited entry points through the reef so you have to do some technical planning.”

“Added to the problem was wondering if the tradewinds were going to show up!”

It did not seem to matter for Kwok's Beau Geste as she ended up taking handicap honours on IRC from Scallwag. Coming in just eight hours behind the 100 footer saw Karl win by 46 minutes on corrected.

Ichi Ban took another half day to finish third on IRC as she was nearly two days ahead of the first local yacht Banque de Nouvelle-Caledonie.

Vodafone naturally smashed the record for the race; but also, despite the light winds, Scallywag came in under the old time.

This is the second time Karl and his crew of Beau Geste have won the Groupama and at the presentation he was asked if he will return in two year's time: “it is an option,” he replied cautiously, “but if I come back and win every time I may not be welcome!”

The organising yacht club Cercle Nautique Caledonie hosted an excellent race. Every night there was a briefing held with the positions and tracks of each yacht shown on a projected map while Michel Desjoyeux gave expert commentary as to what was happening to each yacht.

The club's restaurant then supplied a themed dinner linked in some way to the nationalities out racing. Australia night was burgers and chips!

By the end of the race the two last boats retired to ensure they did not miss out on the festivities.

This is a professionally run race. Make no mistake although it is in a fantastic part of the world and not that far from Australia's shores, it is a race to test even the best crews. The shore side activities and the location make it even more worthwhile.

Matt Allen was cautious when asked if he would return requesting the tradewinds for the next race in two years time but Vodafone owner Simon Hull summed it up for all the crews when he stated at the presentation “your hospitality and passion for sailing is second to none. Promise me the trades next time and we will come back and smash the record.”