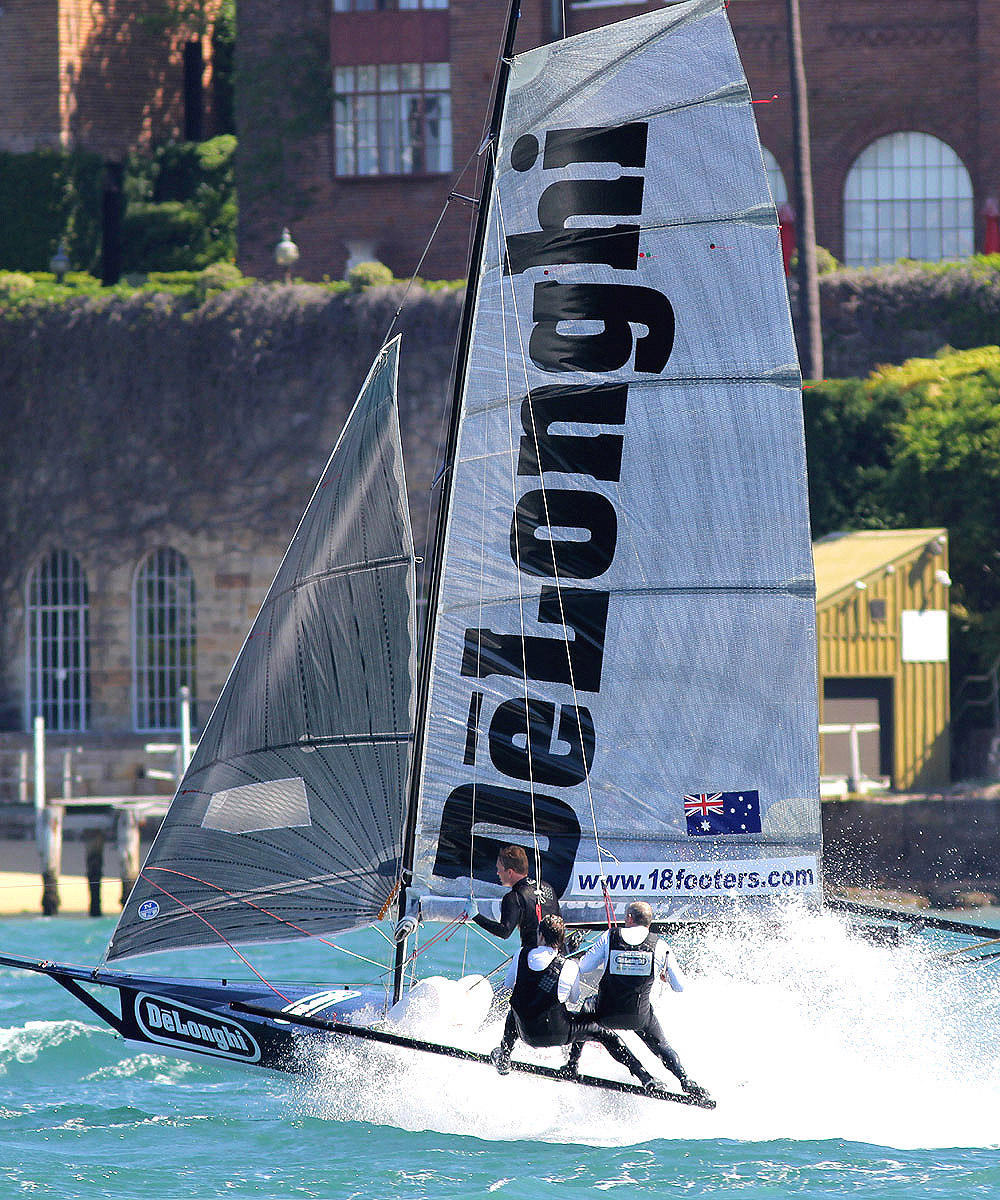 When the new De’Longhi 18ft Skiff was christened at Double Bay last Sunday, it continued a wonderful corporate support of an iconic 125-year-old Australian sport.

Gregg Lawrance, Channel Manager Specialist & Independants, poured the traditional champagne over the bow of the new hull only minutes before the team took it onto Sydney Harbour.

Simon Nearn (skipper), Grant Rollerson and Kieryn Cowan, like the rest of the Australian 18 Footers League fleet, found the 30-knot North East winds too strong for racing, but had a couple of wild rides before returning to shore.

Gregg reaffirmed the De’Longhi company’s support:  “We at De’Longhi are very proud to be sponsors of the 18 Footers, one of the oldest sporting codes in Australia.”

“Now in our 13th season and receiving a new boat only invigorates our existing enthusiasm for the sport.  We are excited at the season ahead.”

“We’d also like to thank the dedication and tireless effort our crew put into the boat and the racing.”

“Thanks also to Brett Van Munster for the great finish on the boat.  Looks awesome.”

“Finally, best wishes to Simon, Grant and Kieryn and here’s to a great season for SKIFF DE’LONGHI.”

Under the De’Longhi banner, the company has sponsored a number of skiffs since 2003, firstly for Grant Rollerson and later Simon Nearn.

The group also sponsored a second skiff for three years under the Kenwood Create More banner, for Brett Van Munster.

Tom Mitchell, De’Longhi Group General Manager Sales and Marketing, along with other company executives have taken the association between De’Longhi and the Australian 18 Footers League to a level rarely seen in sport.

De’Longhi, as a sponsor of the NRL team, associated their support of both sports with a co-sponsorship of boats under the De’Longhi-Rabbitohs banner and the Rabbitohs red and green colours.

For the Australian 18 Footers League, this was a welcome association as James J. Giltinan, the same man who instigated the famous JJ Giltinan 18ft Skiff Championship, was also the founder of Rugby League in Australia in 1908.

“We are a club which is pro-active in supporting talented young sailors and have a proud record of being part of the development of Australians who have gone on to become world champions, Olympic Gold Medalists, leading international ocean racing yachtsmen and America’s Cup winners.”

“It’s companies like De’Longhi and their administrators who have been such an important part of helping the club produce the opportunities for our young sailing talent.”

“Without the support of De’Longhi and our other sponsors much of the talent would not get the opportunity to put Australia’s name in front of the rest of the world.”

The De’Longhi skiff will be on Sydney Harbour again tomorrow when the Australian 18 Footers League will conduct the Alf Beashel Memorial Trophy.

The Club’s regular Spectator Ferry will follow all the action, leaving Double Bay Public Wharf, alongside the Clubhouse, at 2.15pm.